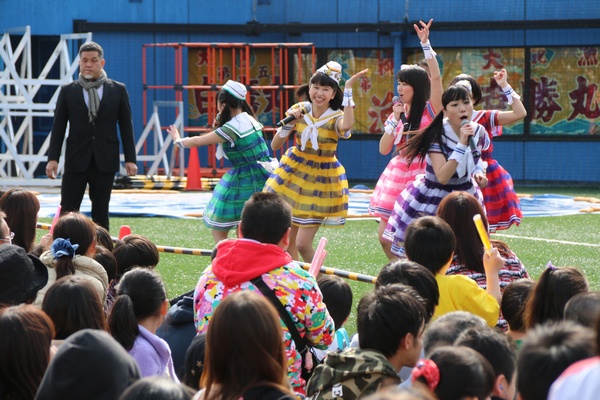 On March 21st 2015, JR Onagawa station in Miyagi prefecture which was destroyed by the tsunami on 3/11, 2011 re-opened, and finally railway traffic between Sendai city and Onagawa town was opened again. Celebrating this re-traffic “Onagawa Fukkou Sai 2015” (Onagawa Reconstruction Festival 2015) was held on March 22nd, and a friend of the town, Momoiro Clover Z participated in the event. The national-popular idol group and about 5,000 Mononofu (fans of the idol group) visited the town, and enjoyed the day with the people.

3/11 and idols
Right after the 3.11, a lot of people come to think about what they can do, and so do idols. Some criticized idols as being unscrupulous at the time of crisis, but for many idols, it seems very natural to do what they can do. It could be an issue related to their reason for existence, but anyway, various idols sought to be of help to someone in their own ways. AKB48 groups began “Dareka no Tameni” (“What can I do for someone?”) Project. They have held a lot of charity events since March 2011, and have expressed sympathy almost every month since May 2011. By the time of March 2015, they visited the disaster area 45 times.

Onagawa is a famous port town located in about 66km east of Sendai city, Miyagi. The town was also heavily damaged by the 3.11 earthquake and 20m height tsunami. Railway of JR Ishinomaki Line, one of the most important traffics to other cities was damaged all along the line. With a rushing reconstruction, a part of the line started again just one month after the earthquake. However because Onagawa town required leveling, they have to wait for the renewal of the entire portion.

Idols other than the AKB groups also visited the town; BiS is one of the most famous ones. In autumn 2012 they visited the town for the first time motivated by a message to the local disaster information radio “Onagawa Saigai FM”. Another reason could be that the mayor of Onagawa town was “Kenkyu-in”; a fan of BiS. By their disbandment in July 2014 they visited there 4 times and nerved the people of the town. “Kenkyu-in”, also visited the city frequently with BiS, and their wota-gei (famous for over creative and sometimes nonsensical) have made afflicted people laugh. Even after the disbandment, former members continued visits and kept contact with the town. The involvement may be little-known, but at least, some people must be saved by it. 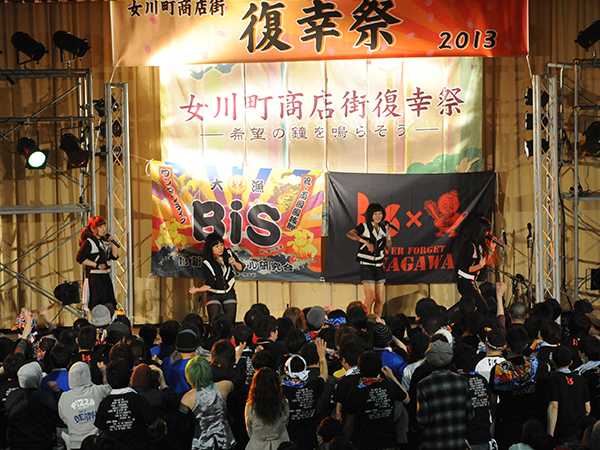 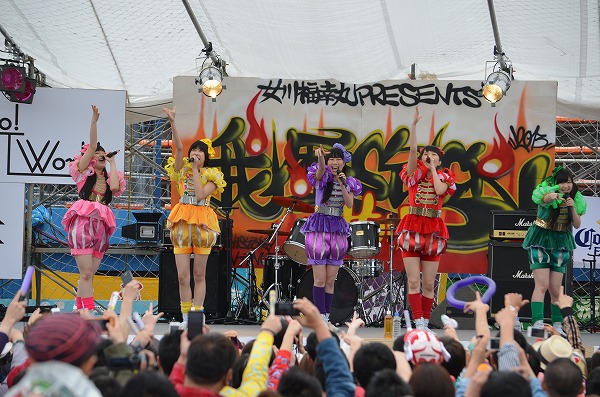 Momoiro Clover Z, on the other hand, did not have strong communication with specific disaster area before 2013. It may be because the group is on the edge because the sub-leader Akari Hayami (blue part) left when the Great Earthquake occurred. Another reason could be that they thought they don’t have popularity enough to assist reconstruction at that time. Anyway, they had some live performances including free or charity one at disaster areas (e.g. at Sendai city in May 2011, and at Iwaki city in February 2012), but they seemed to be kind of one-offs.

It might be misleading, but alternatively they tried to cheer people up by their posture. Originally Momoiro Clover was famous for their live performance dedicated all their strength and heart, and after they got “Z” on April 2011 it became more obvious to everyone. They also have a lot of cheerful songs such as “Hashire!”, “Konouta”, or “DNA Rhapsody”. No matter what their intention is, their stance as an idol group should encourage people directly or indirectly. 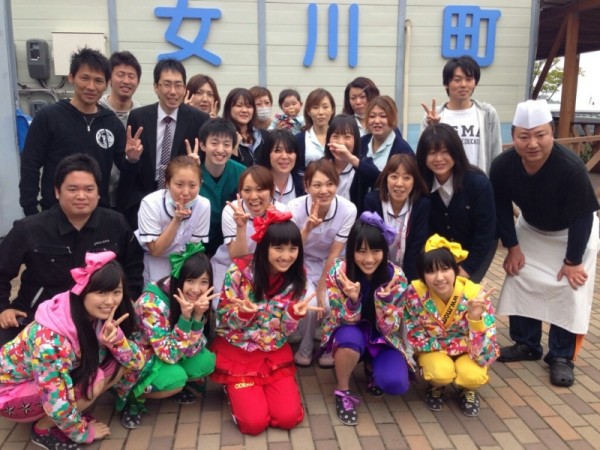 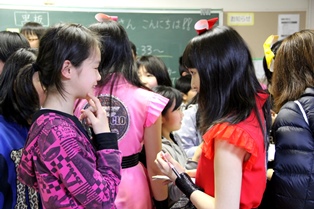 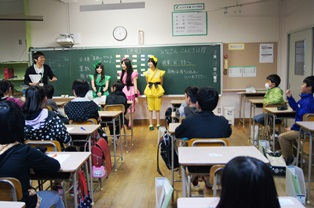 Around May 2013, the group began to have stronger tie with Tohoku people. On May 15th they surprisingly took to the airwaves of local radio in Onagawa town “Onagawa Saigai FM”. They communicated with a female student radio personality, and became a friend with her. Listening to the radio, a lot of people in the town went to the prefabricated radio booth, and the members met with them even after the broadcasting. After that they visited Onagawa elementary school that was established by merging 3 schools after the earthquake. They had a surprising live at the school’s gymnasium and after that they went around the disaster area, learning what the situation there is in real for the first time. They also visited another school, and talked with children.

This first visit must shock them. At their first fun club event which is held at Yokohama Arena 10 days after the visit, Reni Takagi (purple), made a staging inspired by a conversation with a person in Onagawa; “Our town has only gray ashes and blue sea. The tsunami deprived us of other colors.” Thus, they delivered the color image of the town which lost colors. They call the people in Ongagawa as “our friends”.

Momoclo continued to have contact with their friends in Onagawa. Soon after their 1st visit, they went to Onagawa again on June 2nd 2013. This time, they performed at “Gareki Stock in Onagawa 2013” in secret. They met friends from “Onagawa Saigai FM” here again. At every seasonal live of Momoclo, booth of Onagawa town was set, and Mononofu (fan of Momoclo) purchased products from the town. “GOUNN” tour concert at Miyagi Prefecture in 2013 was sponsored by Takamasa, a company of fish minced and steamed in Onagawa town (Of course without sponsor fee), and appealed the name. At Momoclo’s dreamed Kokuritsu Live on March 2014, Tairyo-bata, traditional Japanese fisherman’s flag, presenting people in Onagawa town, was displayed on the stage. Their repeatedly contacts with Onagawa town reminded people around Momoclo of the existence of devastated area, which is also an important thing for the reconstruction of Tohoku.

The attendance of Momoiro Clover Z at the stage of “Onagawa Fukkou Sai 2015” is their fifth visit to the town. They made official announcement for the first time, though the past ones were surprises. It could be because the event is a festival celebrating the reconstruction. Of course it is still only half done, but at last the town got some capacity to receive people outside. Momoiro Clover Z took with them about 5,000 Mononofu, and to welcome them a lot of food stalls are set in front of the newly built station. Fans of the group enjoyed delicious foods, and it must benefit the economy of the town.

Of course their live performance was also outstanding. They had an open-air and all-standing live under blue sky without cloud. Onagawa people are invited to the live for free. The set list of the live was based on that of “Gareki Stock in Onagawa 2013”. In order not to be too serious, tracks such as “Mirai he Susume!” or “Z Densetsu” were not played, but the set list was definitely constructed to encourage people.

Momoiro Clover Z has only 5 members, so it is difficult for them to make large scale activity like AKB Group. However, both groups try to support Onagawa town in their own way. Definitely the 5 girls colored the town again, and idols try to interact with Tohoku in their own way. 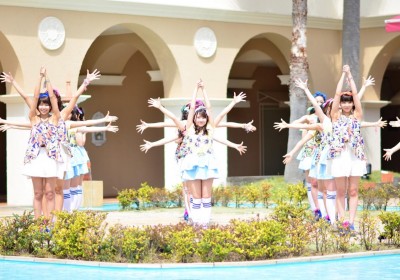 LinQ Take Over a Seaside Wedding Hall in the Luxurious MV for “Hare Hare☆Parade”!