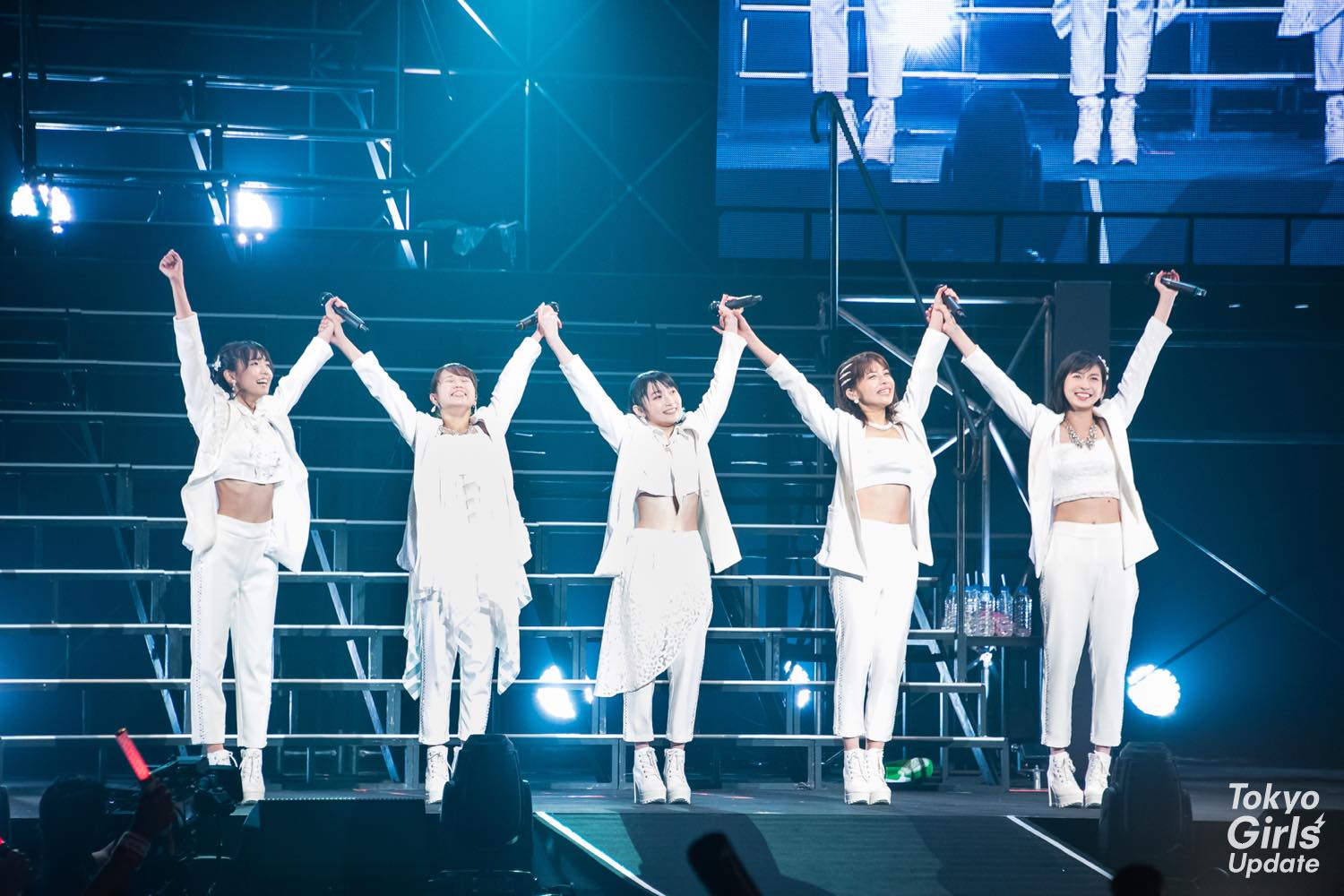 Juice=Juice began a new era with their first Nippon Budokan live “Juice=Juice LIVE MISSION FINAL” on November 7, 2016, having completed the 225 small but important steps that paved the way to their historic concert.

The number “225” played an important role as on May 2nd 2015 at Nakano Sun Plaza, the members made a declaration to hold a solo concert at Nippon Budokan during 2016. They thought that the target was out of proportion with their popularity and capacity. In order to make up for that deficiency, they decided to hold a concert tour titled “Juice=Juice LIVE MISSION 220” which included 220 concerts across Japan and they accomplished their goal with their 220th concert at Matsuyama Salon Kitty on October 22, 2016. 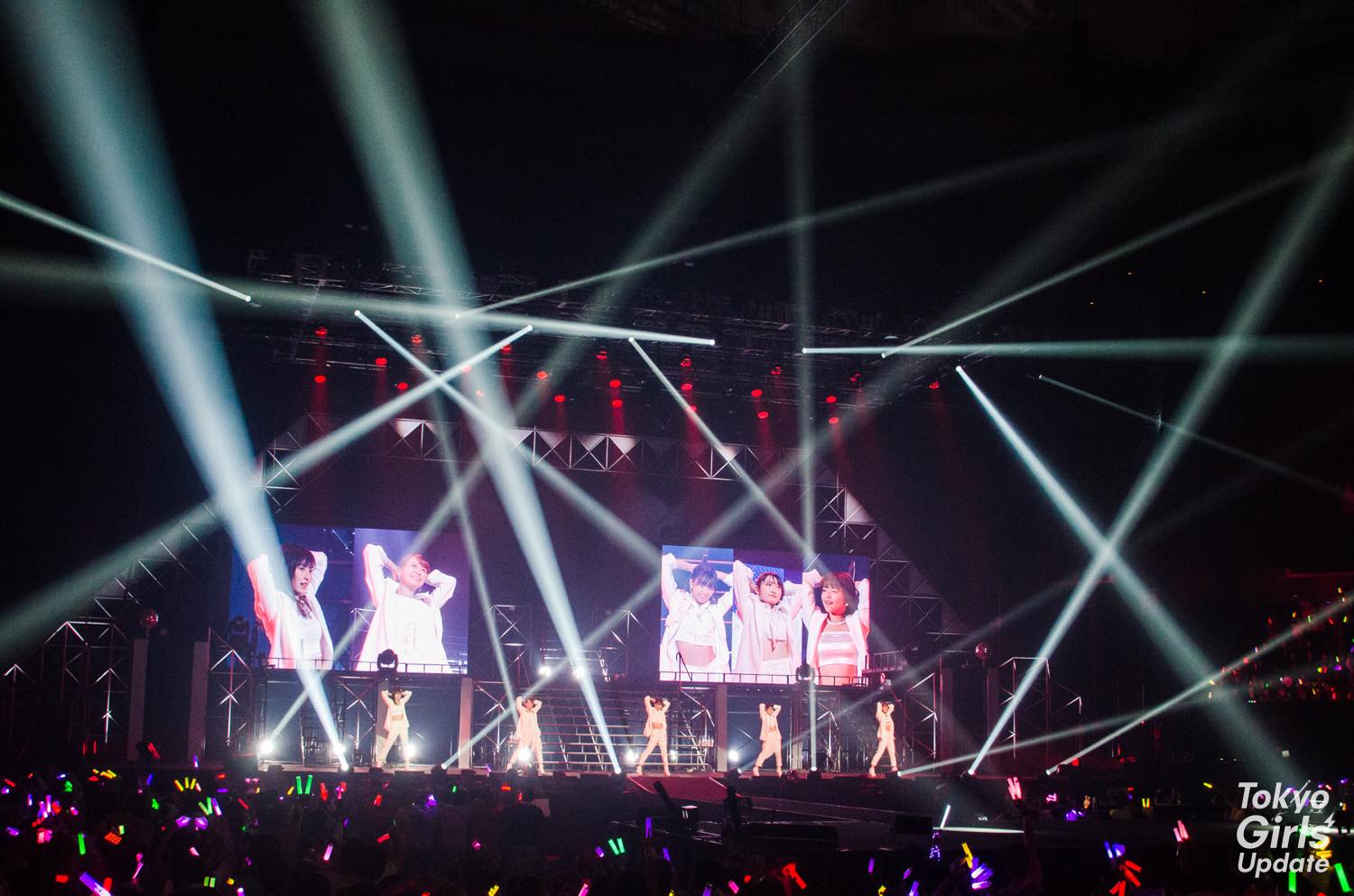 After Tsubaki Factory performed “Hitorijime” to warm up the audience as the opening act, Juice=Juice was broadcast live on the screen from backstage. They looked a little bit nervous but were also filled with the excitement of standing on the Budokan stage. As the arena went dark, the glow of thousands of penlights in the five colors of Juice-Jucie’s members shined brightly. A laser beam formed each member’s shape and asked the audience “Are You Ready?”. The direction helped by the newest technology now becomes one of their specialities.

Sayuki Takagi appeared at the top of stairs, with Tomoko Kanazawa and Karin Miyamoto in the middle, and Akari Uemura and Yuka Miyazaki at the bottom, Juice=Juice’s dream performance began with “Erabareshi Watashitachi”. Running up and down the stairs, they sang and danced as if they did on a flat stage surface, showing the strength gained through 225 concerts. The difference was more clearly shown during their debut single “Romance no Tochuu”, as they no longer looked like girls but mature young women. 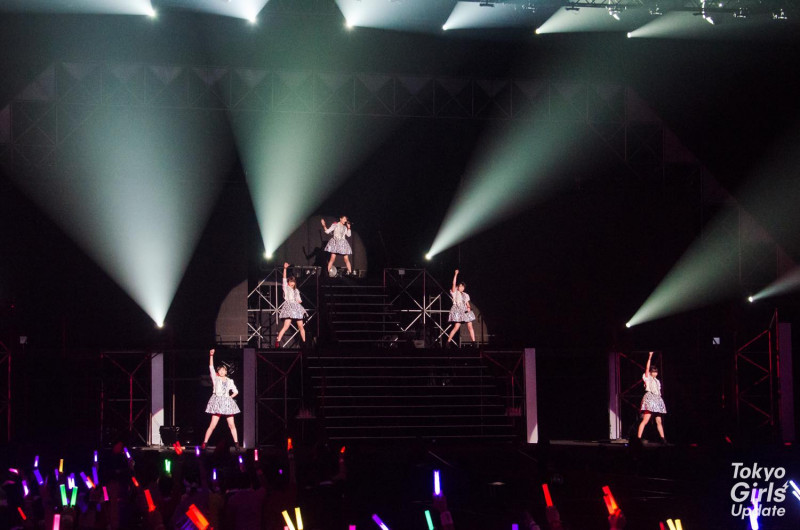 Followed by a short self-introduction talk, the members launched into “Ijiwaru Shinai de Dakishimete yo”. Although the lyrics may have seemed too adult-like when it was released in 2013, now helped by the pink and blue lights, the mood matched the members very well. Moving out to the center stage and continuing with “Mirai e, Saa Hashiridase!”, the audience was moved to tears by the phrase “Next Generation has come! Let’s go to our future! Juice=Juice!”. Hello! Project is currently at a major turning point where senior members ℃-ute and Momoko Tsugunaga (in a sense all the members of Berryz Kobo and ℃-ute) are leaving however, Juice=Juice made a strong case for their inclusion as a group capable of leading Hello! Project into the future. 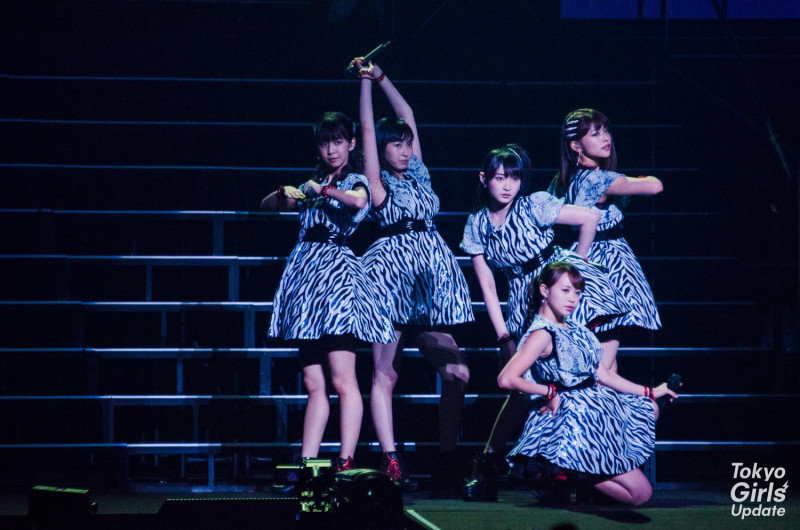 A video recapping the “Juice=Juice LIVE MISSION 220” tour was projected on the screen. Starting from the first day of the concert in Yokohama, it continued through Taiwan, Hong Kong, Nakano Sun Plaza where the Budokan concert was announced, Matsuyama where they accomplished their 220th concert, and Okinawa where they finished for a total of 225. The audience spontaneously clapped their hands for all of Juice=Juice’s great achievements.

Choreography like banging on a door in “Dream Road ~Kokoro ga Odoridashiteru~” hailed with the wave pattern shown in the screen as emphasizing the message in the lyrics. Their latest track “Goal ~Ashita wa Acchi da yo~” followed and the members seemed to tell the audience that Budokan was not a goal but just a waypoint. The audience sang along “wow wow wow” with the members as if it was an agreement. 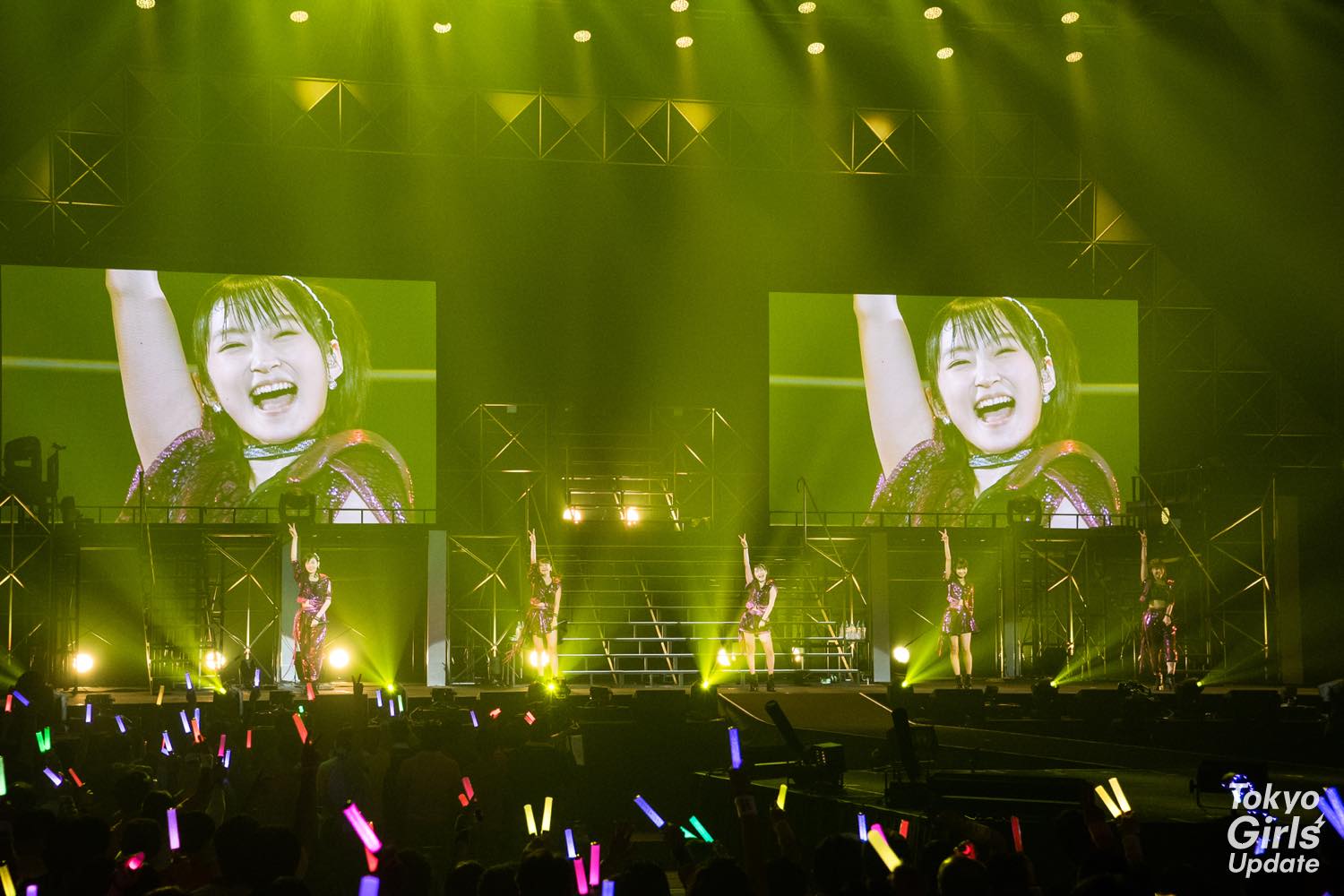 After showing the overwhelming skill of dancing in the dance part, it was turn of the special unit NEXT YOU from Juice=Juice’s drama “Budokan”. Although NEXT YOU was not allowed to stand on the stage of Budokan in the drama, Juice=Juice brought their spirits to the place with “Next is you!” and “Otona no Jijou”. It was an emotional crossover of fiction and reality. 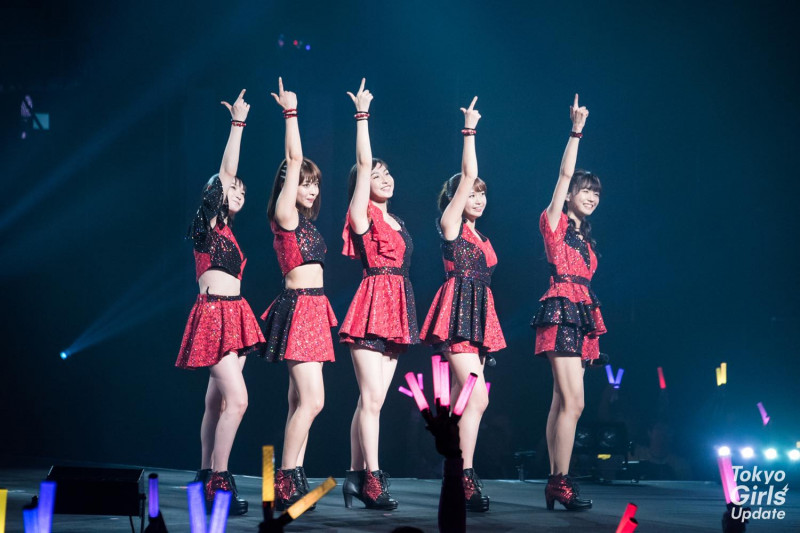 The members returned to the stage in gowns covered with flowers and parasols for “Ai・Ai・Gasa”. Karin acted like a shop clerk serving the others in “Tick-Tock Watashi no Shun”, and Juice=Juice showed their overwhelming cuteness on park swings in “Hajimete wo Keikenchu”. It was like a musical, the highlight coming when Akari kissed Tomoko on cheek. 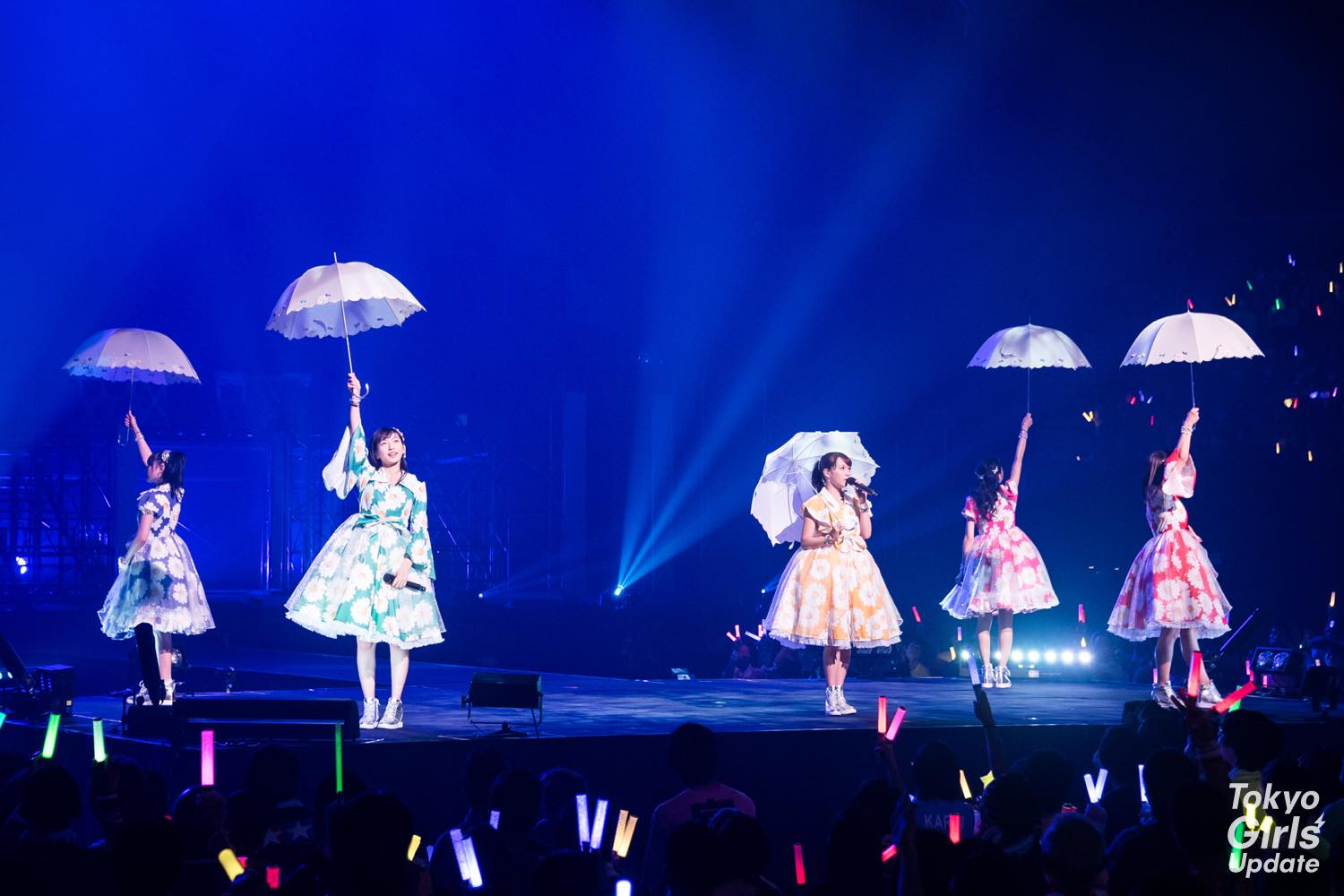 With the energy bubbling up once again, Juice=Juice started to run towards the finish line of their 226th live. “Ashita Yarou wa Bakayarou” was followed by “GIRLS BE AMBITIOUS”, the members enjoying the massive response from the fans by flashing sexy poses and flipping up each other’s skirts playfully. 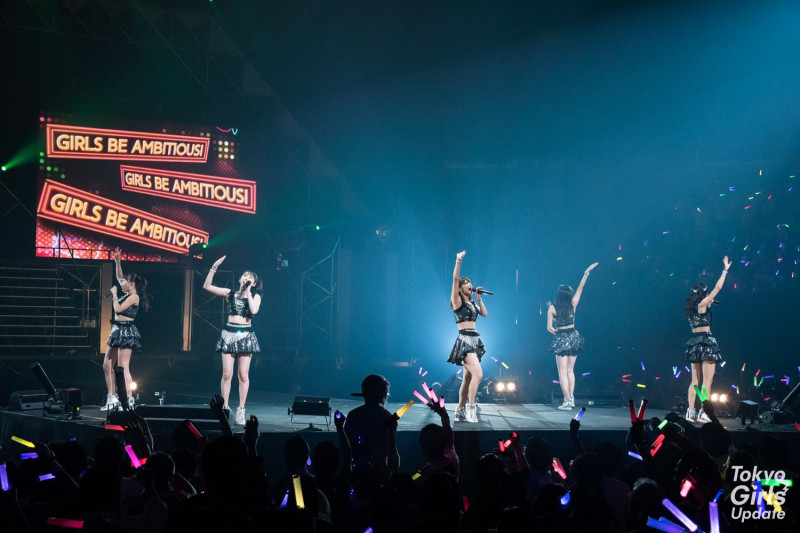 They surprised the audience by jumping up from trap doors in the stage to begin “Watashi ga Iu Mae ni Dakishimenakya ne”. Sayuki’s long-tone voice in “Magic of Love (J=J2015Ver.)” echoed through the arena certainly reached the heart of the audience. They walked around the stage as if they thanked and love the audience one by one. They closed out the main performance with a dazzling rendition of “KEEP ON Joshou Shikou!!”. 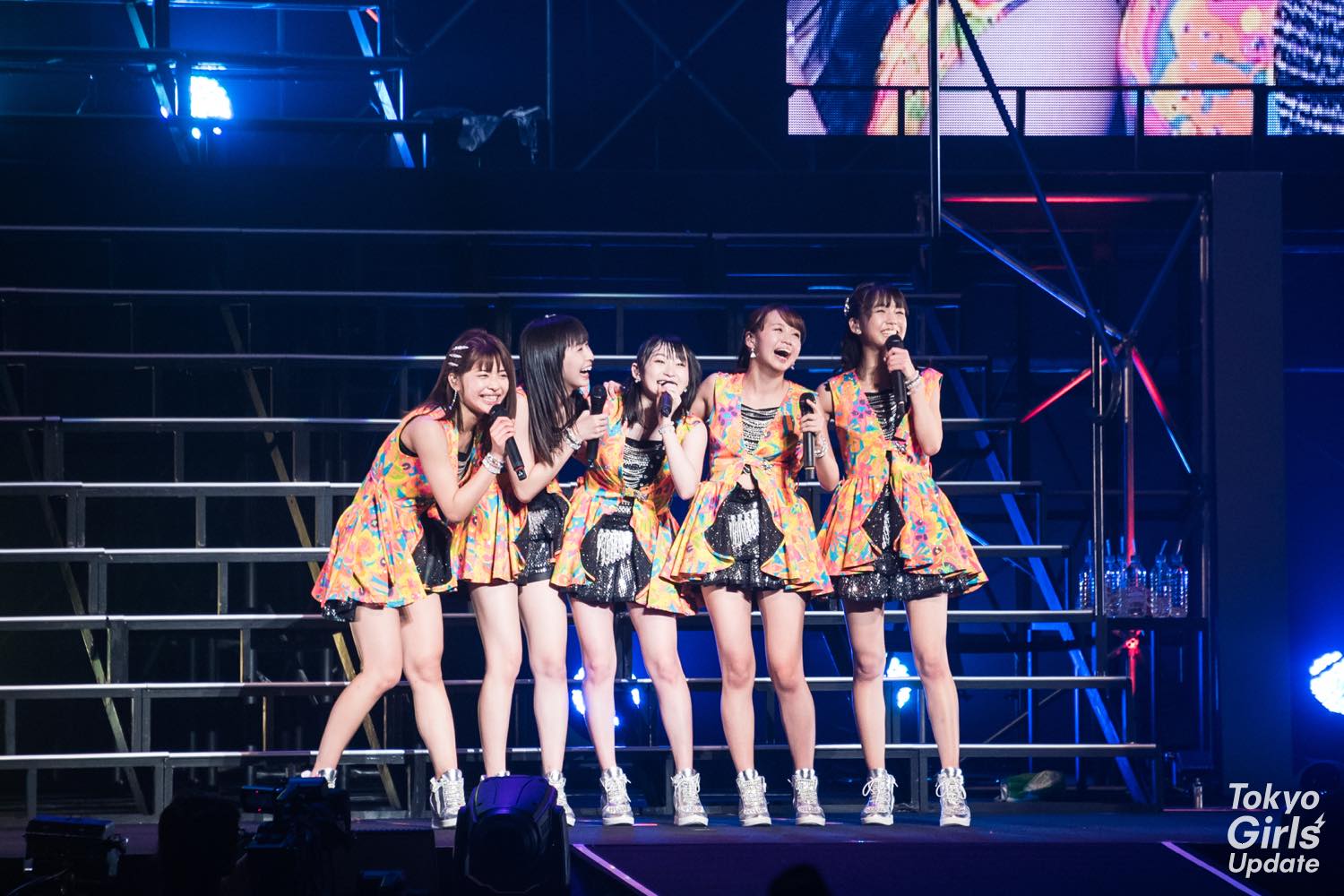 Answering the huge call for the encore, Juice=Juice shortly came back to the stage for “Samidare Bijo ga Samidareru”. Despite the set list packed with uptempo songs, they seemed to be energized by the cheers, their performance even sharper than before.

Finally, the members shared how happy they were to stand on the stage of Budokan and thanked the audience for the huge support since the beginning of the tour. Karin shared that she always did her best to express her gratitude though her performance and the best response was for fans to keep coming back to see them again, proving that Juice=Juice belongs to Hello! Project whose characteristic is performance with love. Tears rolled down the cheeks of the members as the encore came to an end with “Tsuzuiteku Story” which means “never ending story”. Budokan was simply the starting point of the story of Juice=Juice.

Juice=Juice returned for a double encore, singing “Wonderful World” along with their fans. The lyrics “This world is wonderful. How much love is it covered in?!” really seemed to sum up their feelings as arena was filled with happiness and love for Juice=Juice. 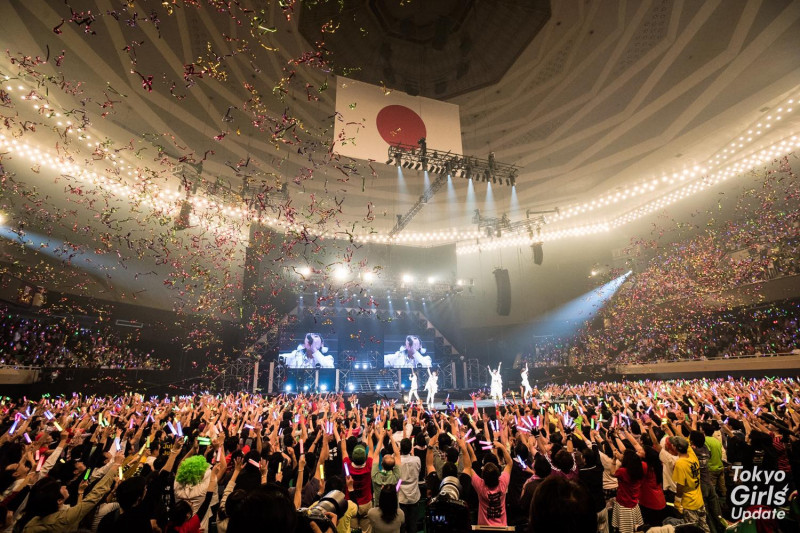 As the curtain closed on Juice=Juice’s 1st Nippon Budokan concert, there was nothing but feelings of overwhelming happiness mixed with exciting expectations for the future that awaits them and their fans as they continue to reach higher. 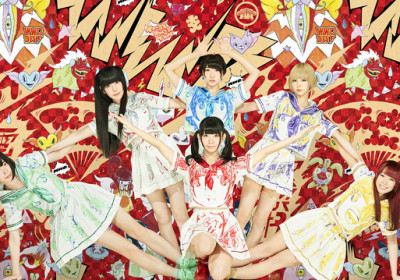