Some Main Stage Highlights of the @JAM EXPO 2014 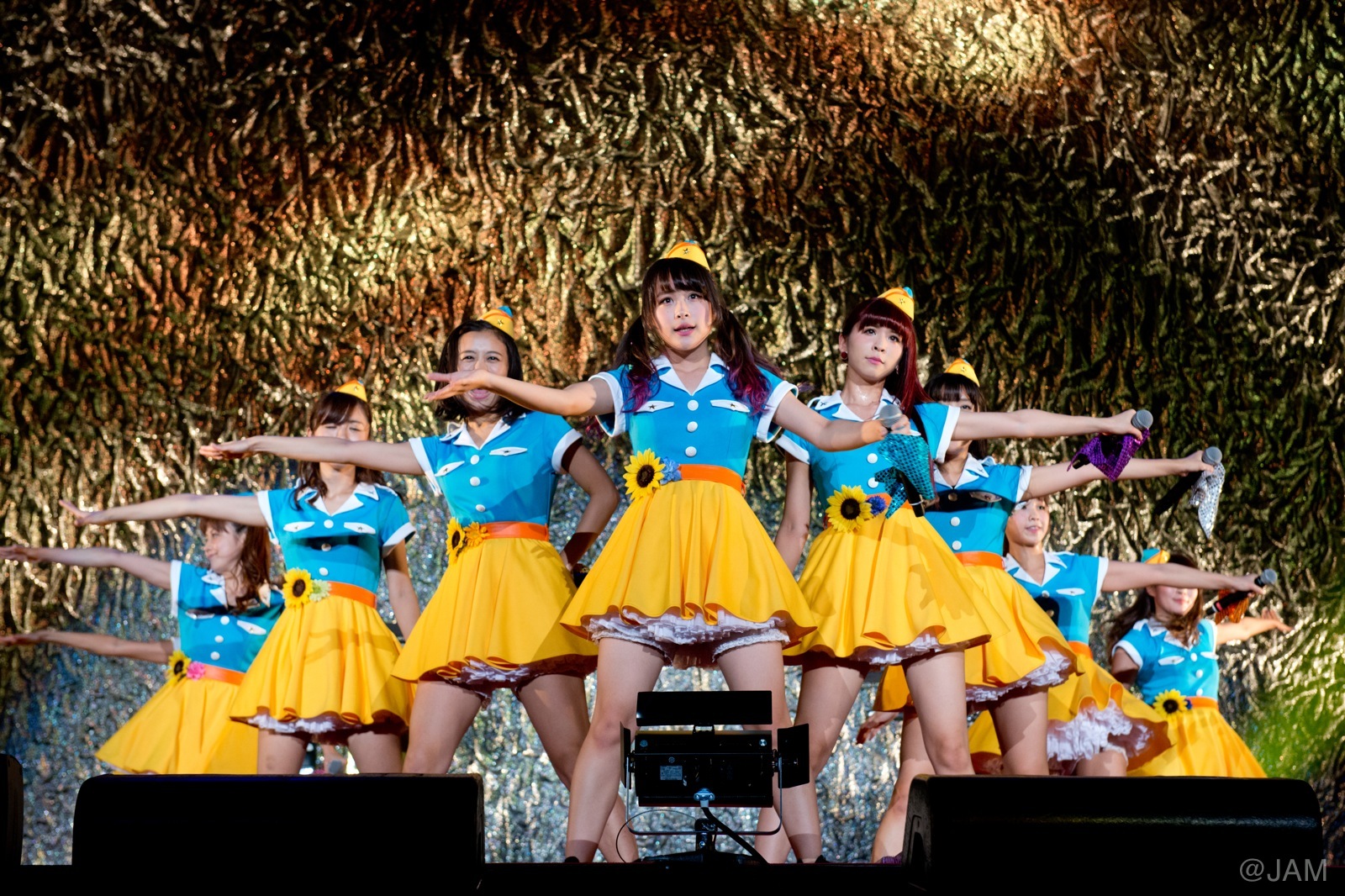 Many of the bigger acts of the @JAM EXPO split their time between the Strawberry, Blueberry, and Pineapple Stages on Sunday. With the Strawberry Stage being the largest and easiest to access, unless you were a die-hard fan of any of these groups, staying in the arena was the safest bet to see your favorites. Unlike the Hot Stage at Tokyo Idol Festival, it was indoors, but that only meant that it was slightly cooler with all the red-hot groups onstage! While it would have been great to see all the groups, starting with openers UPUPGIRLS KARI (10:00-10:30), with 100 groups all over the arena, it proved to be an impossible task. 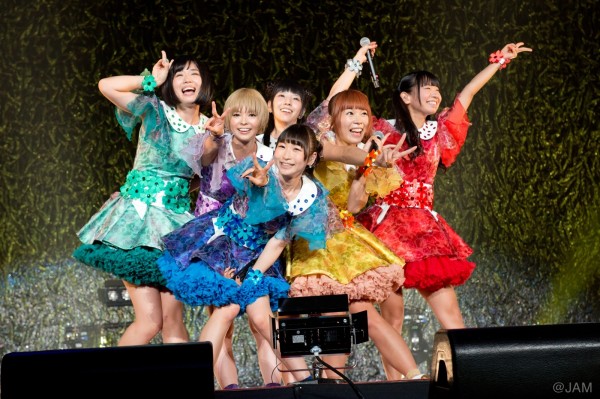 As one of the few groups that had been a part of @JAM events from the very beginning, Dempagumi.inc was the obvious choice to bring festivities to a close. A manic video show on the screens accompanied the opening songs “Demparade Japan” and “VANDALISM” before they slowed things down with “Kira Kira Tune”. The arena glowed orange during the emotional “ORANGE RIUM” and the set was capped off with the rambunctious “Chururi Chururira”. 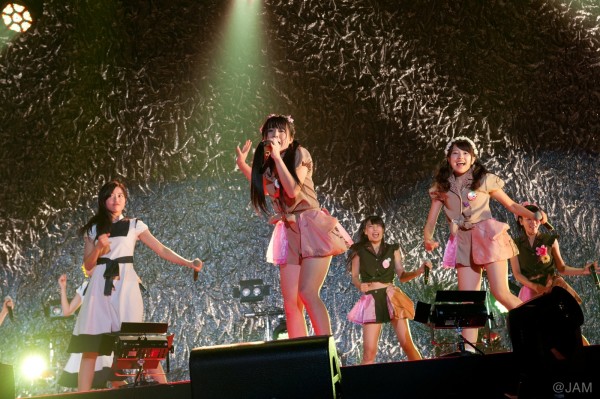 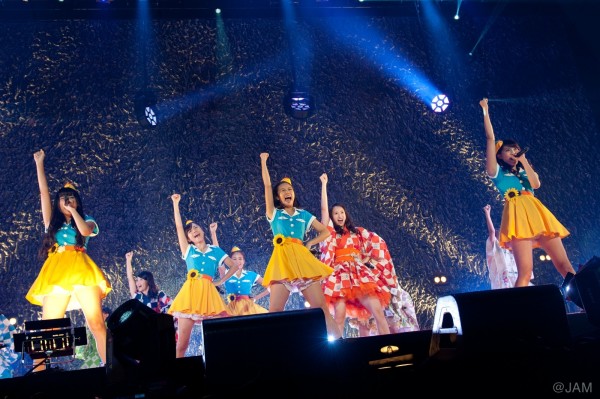 One of the highlights of the day came during the “Collab Special” between Tokyo Performance Doll and SUPER☆GiRLS. Team Makenki performed “Mugen Fly High!!” followed by Hime Kyun Fruit Can, Dorothy Little Happy, and LinQ doing “nerve”. SUPER☆GiRLS and PASSPO☆ formed two units with the first one, “SUPER-PO☆” (Anzai, Mori, Makita, Negishi, and Fujimoto from PASSPO☆ plus Hikaru Watanabe, Asakawa, Shimura, Katsuta, Mizote, Arai, and Uchimura from SUPER☆GiRLS) got together for a rendition of “Joshiryoku Paradise” like never seen before with Mori belting out the final “KIMI wo Get Chu” loud enough that she could have been heard even without a microphone. The second group, “PASS-GiRL” (Miyazaki, Maeshima, Koume Watanabe, and Tanaka from SUPER☆GiRLS; with Tamai, Masui, Okunaka, and Iwamura from PASSPO☆) delivered an incredibly sweet version of “Hikou Shojo”. 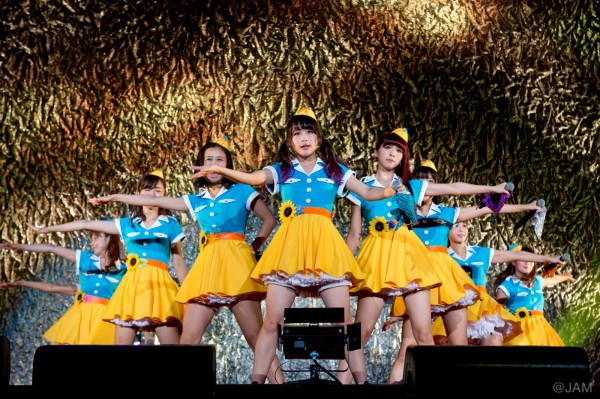 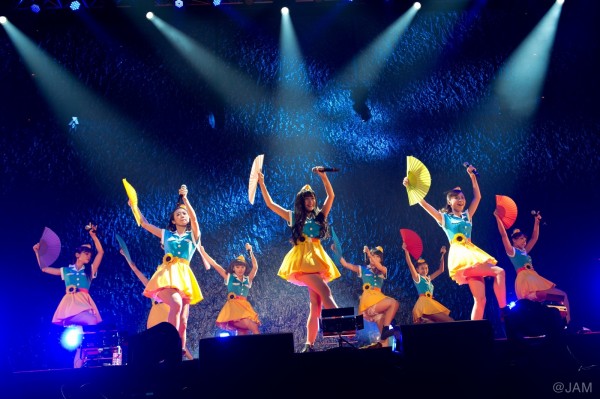 Despite the playful jab from SUPER☆GiRLS about PASSPO☆ recently “flying at a low altitude” during the collab stage, the 9 member girls rock unit took flight with a 6 song set which began with the festive “Natsuzora Hanabi” and landed safely with their Oricon Weekly #1 ranked “Shojo Hikou”. Other songs included their latest single “Himawari”, “Material Girl”, “WANTED!!”, and “the song that everyone likes” according to Anna Tamai, “Pretty Lie”. 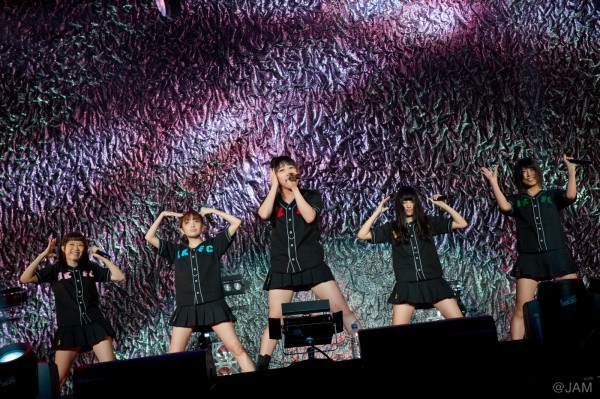 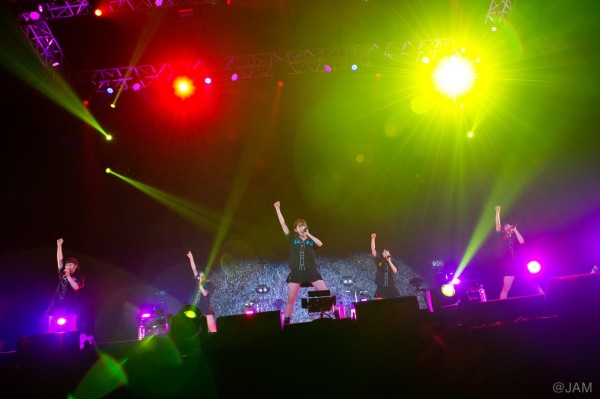 Hime Kyun Fruit Can rocked with a powerful nonstop set that had fans jumping and two-stepping as well as shoes and hats flying through the air. With a mix of their major label (“Andante”, “Moratorium”, “Seize the days!”, “Summer Story”) and indies (“Strawberry KISS” and “Killer Tune”) songs, the quintet from Ehime left the stage glistening with sweat.

While there were many amazing performances on the @JAM Strawberry Stage, as mentioned earlier, this author had attempted to see all 100 groups that were performing that day. As a result, there were quite a few groups that I had seen but cannot thoroughly report on in this short article, as I was unable to see their entire performance. Do not make the same mistake that I did. When presented with so many choices at an event like @JAM EXPO, make your plans well in advance and stick to them! Please be sure to comment the next time we announce an event and we will try harder to bring you detailed reports about the groups you want to hear more about! 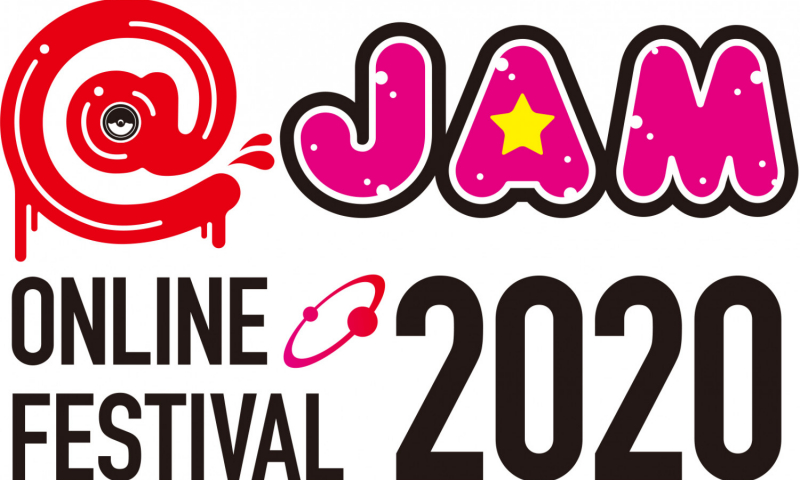