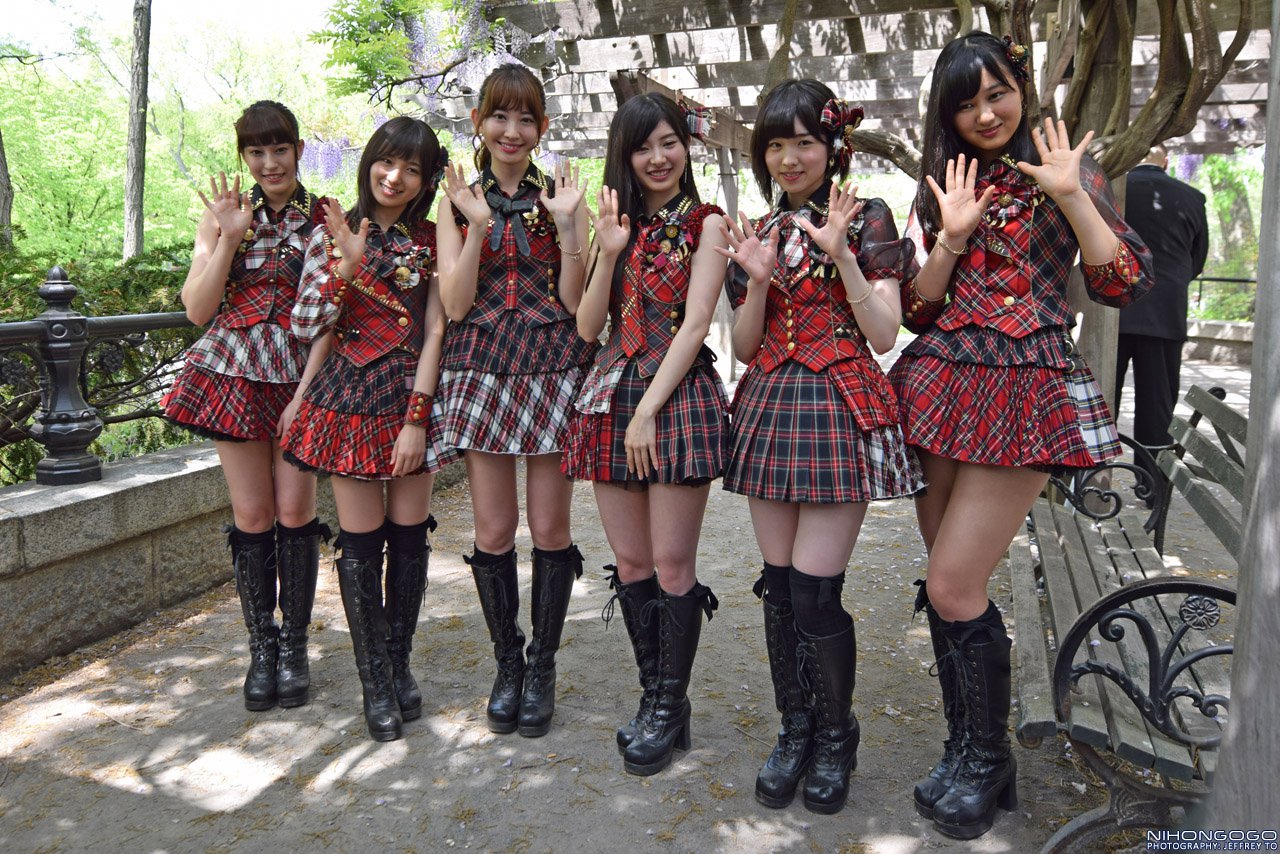 The girls of AKB48 Swept into Central Park Ushered in by the annual festivities offered by the 2015 Japan Day culture festival.

Haruna Kojima, Saho Iwatate, Rina Hirata, Tomu Muto, Rena Nozawa, and Ryoka Oshima represented AKB48 who treated the bustling New York City crowd to several of the groups iconic J-pop hits. The group, whose objective can be summed up with the slogan “Idols you can meet every day”, consists of five teams; Team A, Team K, Team B, Team 4, and Team 8, who perform at AKB48 Theater in Akihabara, Tokyo nearly every day. 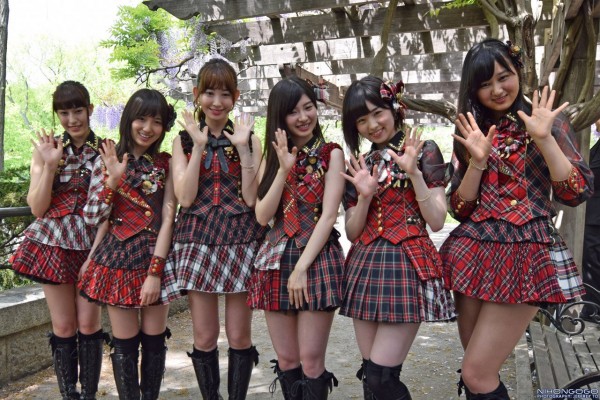 The group has expanded both in Japan with Nagoya-based SKE48, Osaka-based NMB48, Fukuoka-based HKT48, and Niigata-based NGT48 as well as outside Japan with Indonesia-based JKT48 and Shangai-based SNH48. The group set records up and down Japan with an astounding 20 consecutive million-selling CD’s that’s still going strong today. Supplementing their performances at the theater the girls also make frequent guest appearances on television shows, movies, and other media along with interviews and pictorials in some of Japan’s top selling fashion and entertainment magazines.

The Central Park Naumburg Bandshell gave the over 50,000 attendees a look into Japanese entertainment culture with acts ranging from the high flying beats of the COBU taiko drum crew, the comedic stylings of Rio Koike, the live painted art of Takeshi Sato, fresh moves from fledgling hip hop dance crew EXPG Boyz, and dared to top it all off with Japan’s hottest pop music act AKB48.

Just ahead of their bombshell performance the staff at Nihongogo were invited alongside several of Japan’s largest media outlets to take part in a press conference where we found out a little bit more about the event and the groups future plans.

-How do you feel about Japan Day?
Kojima: Because I love NYC, I’m very happy. I’m also really pleased to be able to perform at such a large event [in] Central Park – but also kind of nervous. I’m looking forward to the event.
Oshima: Because this is my first time in NYC and in the US, and we’re performing at such a large event, I look forward to delivering a happy and energetic performance. 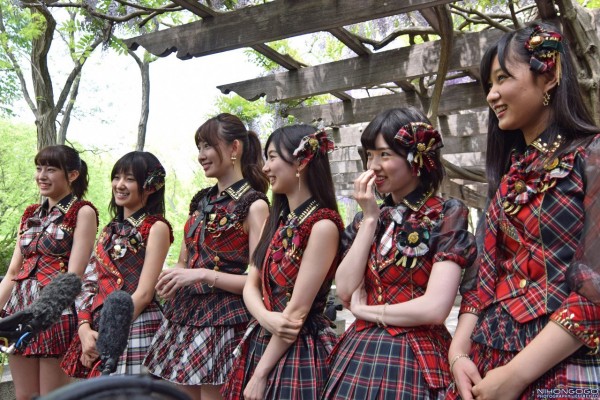 -A question for Kojima-san – after this Japan Day event, would you like to perform elsewhere in a concert in the US?
Kojima: While I don’t have the right to decide, [these performances] showcase both AKB48’s performances and Japan’s “cute” culture to foreign fans, so I would like to continue to go to a lot of other countries on behalf of AKB48.

-Another question: do you have anything you would like to communicate to your American fans?
Kojima: While I haven’t talked to them personally, I do get SNS and other such messages from fans, so I feel connected to them and hope they would continue to support me.

-Kojima-san – given that you’ve already mentioned that you will graduate, but haven’t made the announcement yet, have you thought about doing a graduation announcement that no one else has done – in New York?
Kojima: While it’s true that I really like New York, and I might have thought about it [laughs]…
Iwatate: Eh?! You have? [laughs]

-Hirata-san – compared to the last time you were in Washington DC your role is slightly different here in New York. How do you feel about that?
Hirata: As someone from Arizona, being able to perform in the US makes me personally happy. I would also like to show fans in New York more about AKB48.

-Who is here in New York for the first time?
Everyone besides Kojima raises their hand.

-If you were to associate New York with one word or concept, what would it be?
Hirata: Lady Liberty!
Oshima: Colorful city!
Kojima: Shake shack!
Muto: Times Square!
Iwatate: Wait I was thinking of that too! What should I pick? Broadway!
Nozawa: Japan Day! 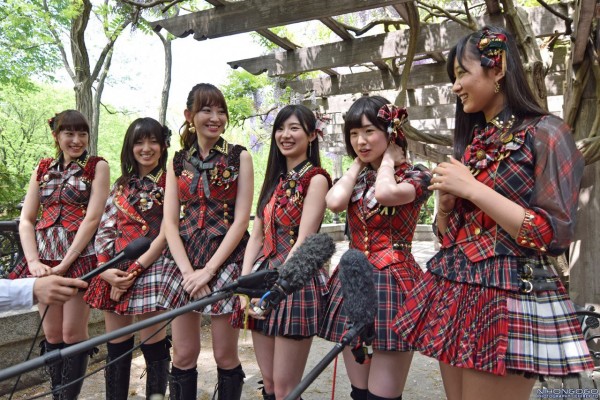 -If NYC48 were to be created, would you like to be transferred here?
Hirata: Hm… I’m not really sure.
Kojima: but you’re from Arizona.
Everyone nods in agreement
Hirata: I might be sent! If it were to happen, because I speak both Japanese and English, I would like to become a person to help popularize and expand the group… if it were to happen [laughs]

-Thank you. What about everyone else?
Oshima: It wouldn’t be bad.
Muto: Because I can’t speak English at all, if it were to happen, I’d start by studying English full force.
Iwatate: As members, you have to communicate [with your fans], but at the same time there are other ways to learn how to communicate [without English], so I’d like to face such a thing positively.
Nozawa: As someone who’s been transferred from JKT48, I think a group [like NYC48] could really popularize Japanese culture so if NYC48 does happen, I would love to come.

-Finally, what do you think about Takahashi Minami graduating from AKB48?
Kojima: Because Takamina is a core member, the “heart” of AKB48, I think the group will definitely change as a whole after she leaves. But given that it will change so much, I cannot really see exactly what sort of group AKB48 would turn into.