It has been revealed that Dempagumi.inc to release their new album “WORLD WIDE DEMPA” on December 11th.
It will mark their first album in two years since they released the previous album “Ne Kiite? Uchu wo Sukuu no wa, Kitto Osushi. . . Dewanaku, Denpa-Gumi Inc.!”
The new album will include “Demparade JAPAN”, “KIRA KIRA TUNE”, “W.W.D”, “DenDenPassion”, and “W.W.D II.” It will be released in different three editions : Ultra-luxury Limited Edition which list price is 10,000 yen, Limited Edition will come with DVD, and Regular Edition (CD only). The DVD of Limited Edition will feature all Music Clips released after “Demparade Japan” and some footage from their live concert.

Dempagumi.inc will be holding the nationwide tour from January 4th, 2014. If you plan to go their concert, don’t forget to check the new album and DVDs! 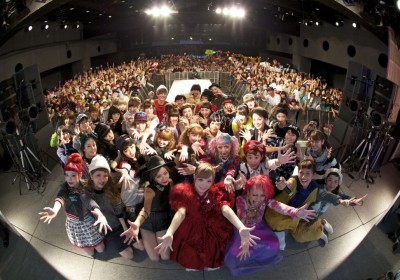 15,000 People Gathered in Harajuku! The Best Kawaii Festival in the World Went Over with a Bang!