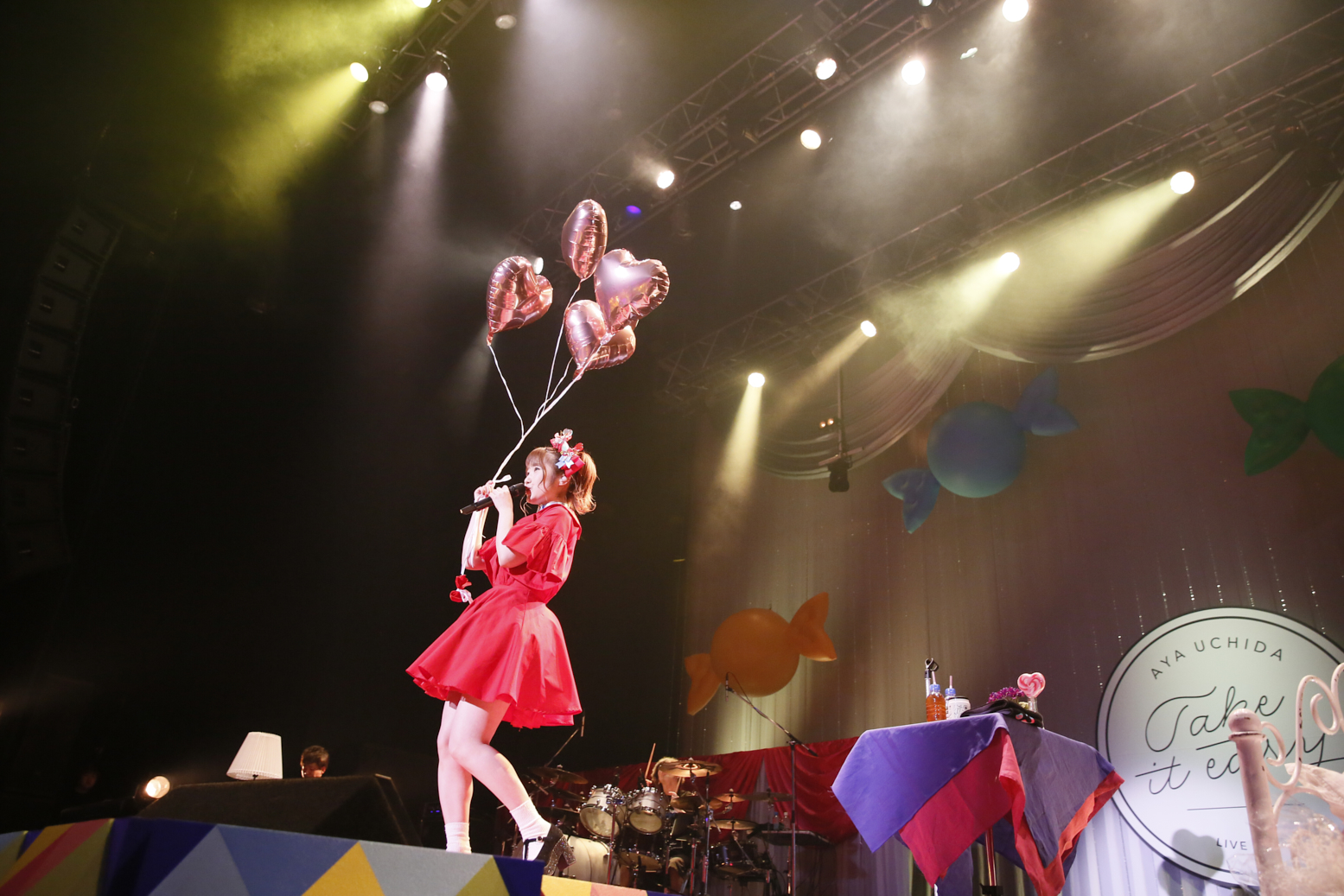 Voice actress and singer, Aya Uchida held “AYA UCHIDA LIVE 2019 ~Take it easy~” on March 8th (Fri.), 2019 at Zepp Tokyo. Friday night, when most Japanese wants to cool down after their rough weekdays, Zepp Tokyo was filled with many Ucchi fans to see her and listen to her latest single “Sign/ Candy Flavor”. 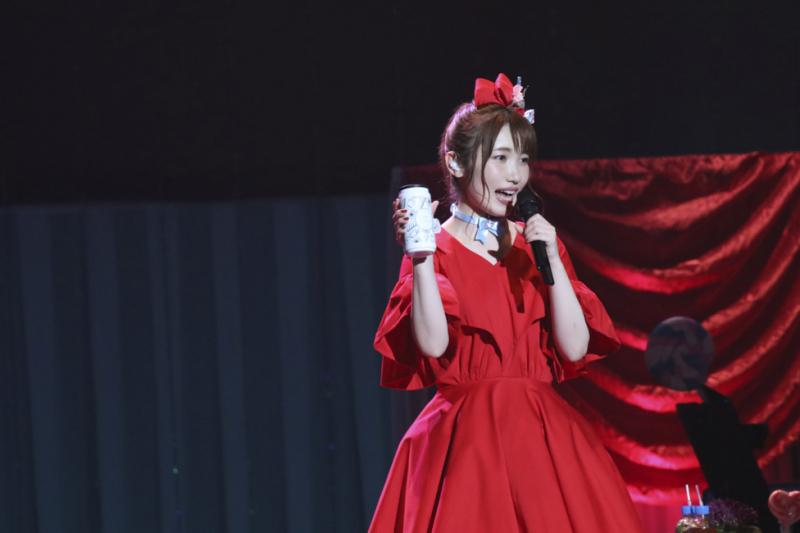 The stage was decorated like a room that any girl would once dream of; also just like a room in her concept album “Sweet Tears” CD jacket. Colorful wrapped candies are floating in the roof, and stage was filled with cute props; such as two shot photo with Gunma-chan (a mascot character from Gunma Prefecture, where Uchhi was born), a big fluffy teddy bear, heart balloons, etc.

After her second song “What you want!”, she introduced herself to the fans with a big smile, strongly confessing that she was worries if people wouldn’t come because the live day was set on Friday, but she was relieved to see many fans here at Tokyo Zepp. Also, from her last live concert, it has been almost five months, which meant very special to Ucchi. 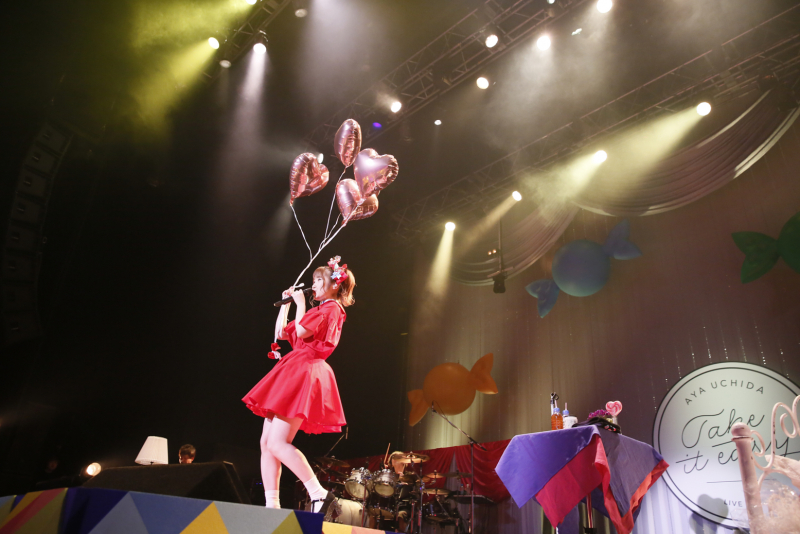 On her 4th song “Everlasting Parade”, heart balloons on the stage was gifted to the main guitarist, who was near his birthday. 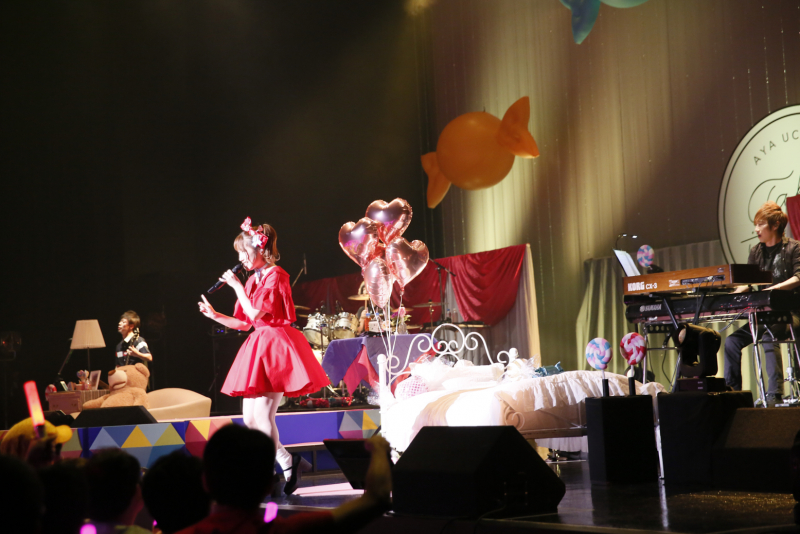 As a White Day present, Ucchi gave two special choices for the fans to choose. Her 6th song on the Set list was “Kick and Punch, which do you want?” The teddy bear on the stage was roughly used during the song, receiving a great punch and kick, and finally a big hug by Ucchi.

On her 7th song “Let’s Go! Pegasus”, she apologized the fans for not updating her blog post recently and made the fans laugh. The first part of the live ended with a mike stand performance song “Holiday”. She called out the fans to show more love power that the fans have must waited for this live, and the fans answered by calling out her name and waving colorful penlights even stronger which can be felt by the atmosphere. 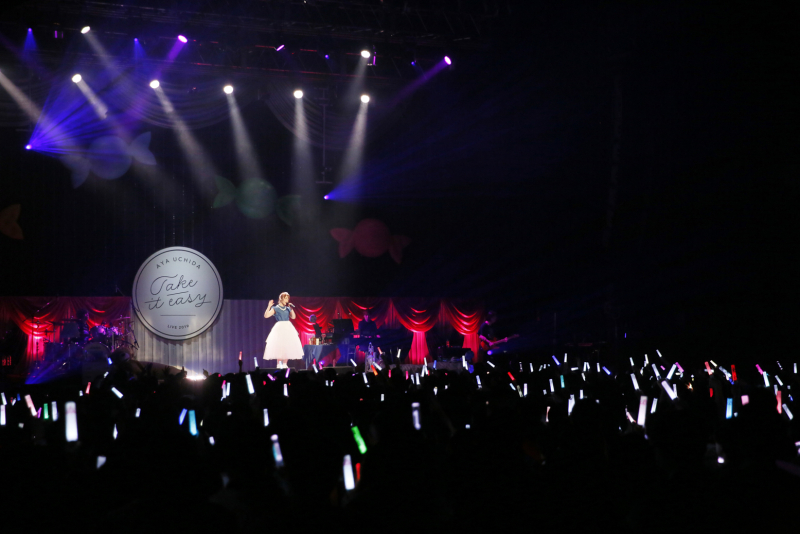 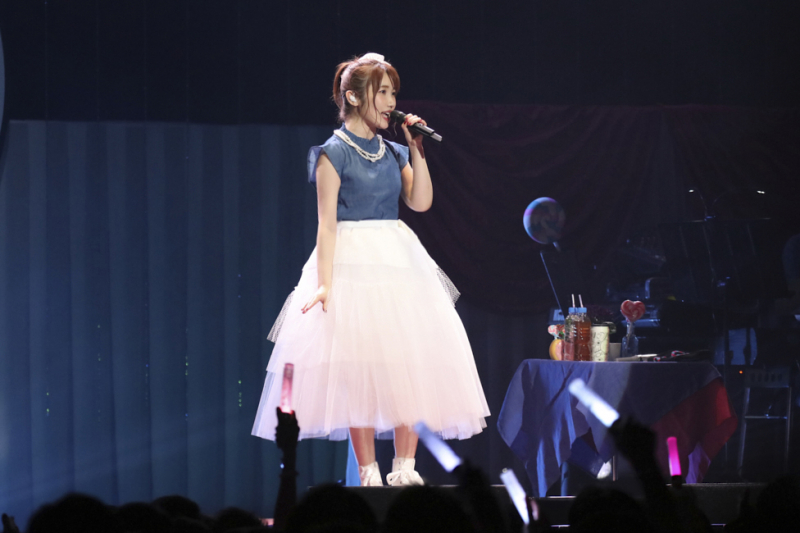 Her second outfit was a light blue no sleeve knit with a white beads necklace on her neck and a white long tulle skirt. Like a present, she put a white bow on her hair, which was a best match for “Sign”, the latest song which is an ending theme song for TV anime “The Quintessential Quintuplets (Go-Tōbun no Hanayome)”.

Second part of her set list is arranged with calm songs throughout. She expresses different faces in each and every songs, which comes from her voice actress experiences. Ucchi looks happy, and her happy might come from her fans’ smile; when she drops off her microphone, she views the audience as if she is checking every and each people’s face by nodding to assure the fans that she understands their feeling, and thanking the fans while closing her eyes sometimes. 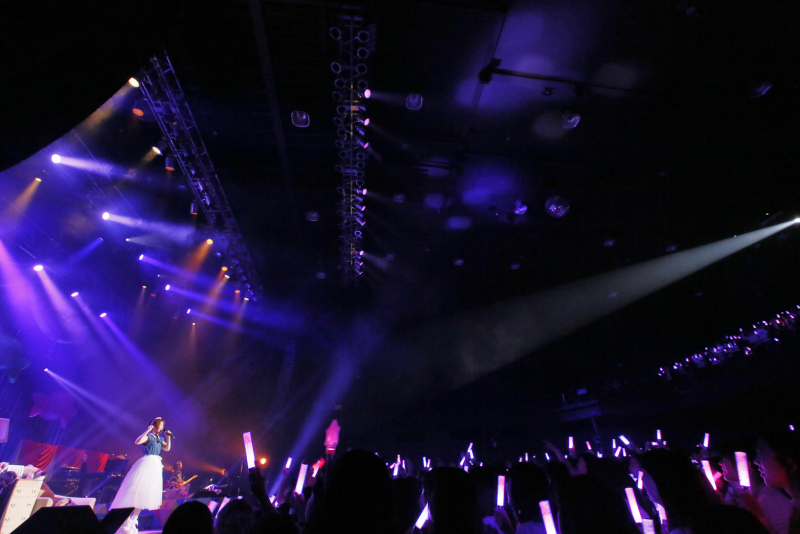 The view when singing “SUMILE SMILE” was fantastic, where Zepp Tokyo turned into one lavender field by the purple penlight, shining Ucchi on stage, just like the song title. (Sumile is violet in Japanese) 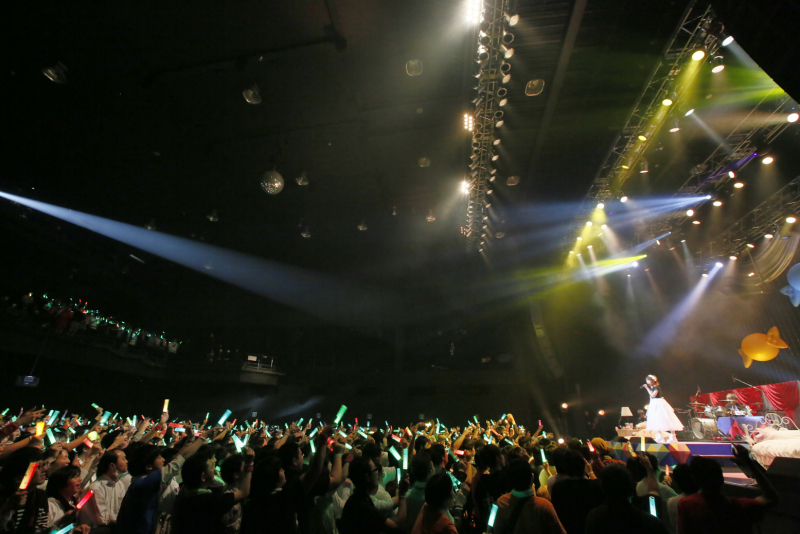 Encore started off with her song called “Donuts”, and the band members were introduced as well. Ucchi wore the live T-shirt in arranged way. She once again thanked the fans for coming to the live on Friday, and told that live is a special place to act out the another “Ucchi” who is different from voice actress and ordinary her. She used the word “fantasy” to express her feeling when she is on stage. Adding to this, she wanted to make her fans to come to the live in a relax mood, and this connects to her idea of naming this live as “Take it easy”. She wanted herself to relax and to make the live fun as possible without feeling any worries, and she wanted also the fans to feel relax and have fun when coming to see the stage.

Before singing the final song “Merry Go”, she also thanked the weather because the previous day was pouring, but the day of the live was a sunny day. She again thanked the fans for showing their happy sunny smile, and promised that their smile will always be the “sign” to see at Aya Uchida’s live forever. 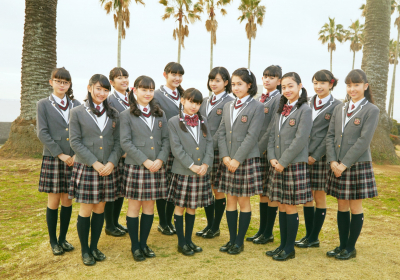 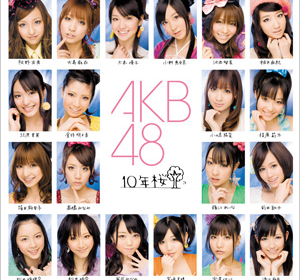 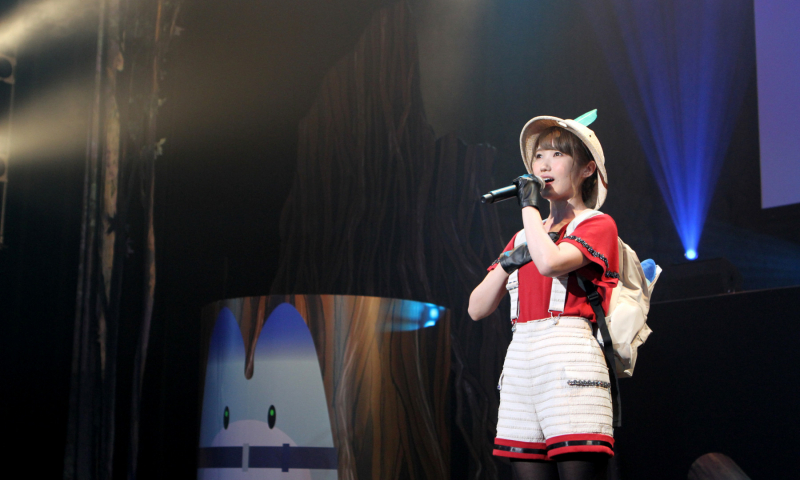 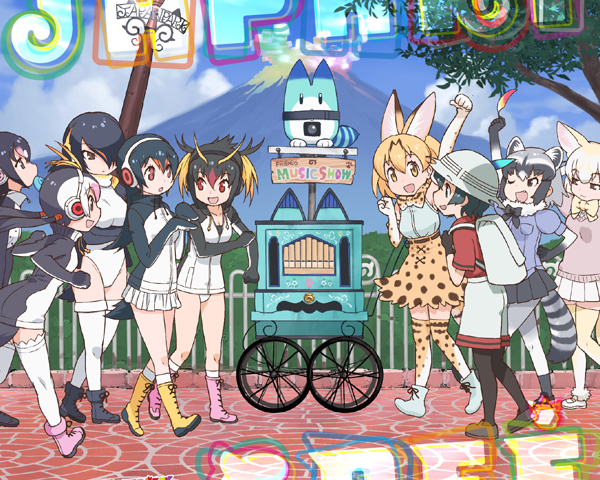 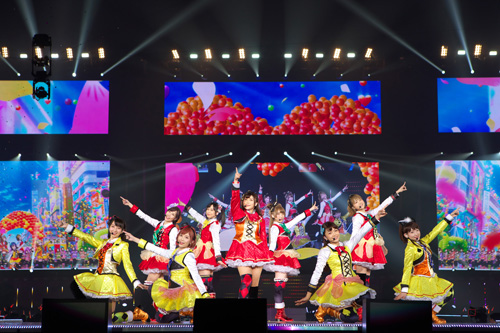 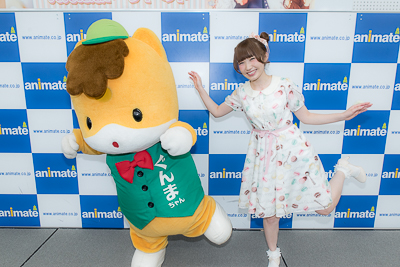