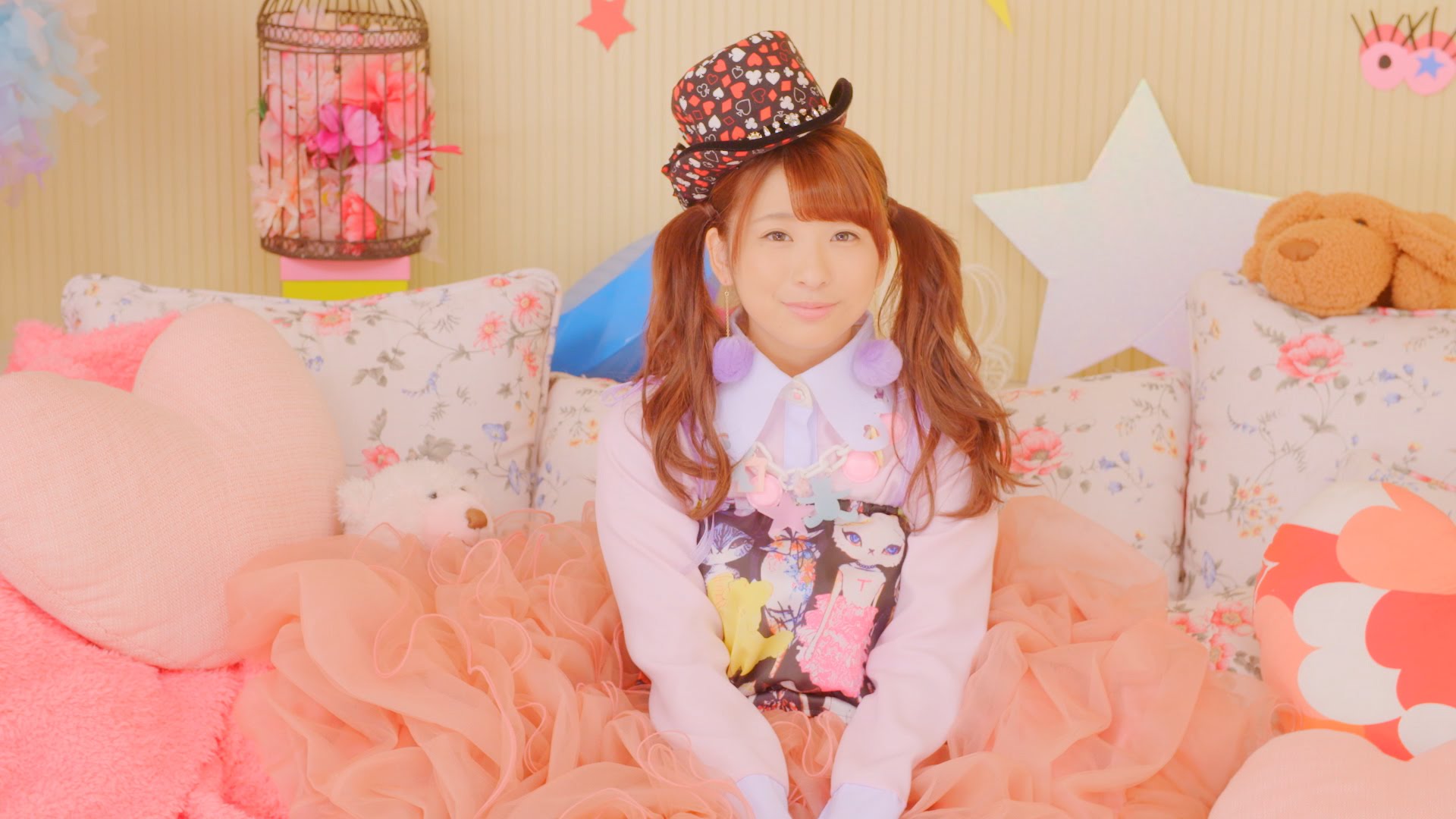 Even though there is no Thanksgiving in Japan, it seems like a lot of the major music releases were focused on the fourth week of the month with HKT48 and SKE48 being the biggest names at the top of that list. There was also Kanon Fukuda’s final single with ANGERME and Vanilla Beans’ re-debut with avex! The YouTube RED saga seems to be dragging on with a lot of miscommunication slowing things down but, if you know where to look, you can still watch your MVs! Here are 12 of our favorite MVs for songs released in November of 2015 listed in chronological order according to their release date.

“Desugita Kui wa Utarenai” and “Donden Gaeshi” were also great songs but, there was just so much going on with “Watashi” to deny it a spot! It was not only Kanon Fukuda’s graduation song from the group after 11 years in Hello! Project but she also wrote the lyrics for it, one of the first steps towards her future career. The self-proclaimed reincarnation of Cinderella takes a glass slipper out of a box and sings straight from her heart for the final time. Seeing her perform it on the Nippon Budokan stage surrounded by deep pink cyalumes on November 29, 2015, it was a fairy tale ending!

It’s no surprise that Yufu Terashima gathered up a bunch of yurukyara (local mascots) for her latest MV but after interviewing her and having her explain to us why she is fascinated by them, things took on a whole new dimension. It can be easy to dismiss cute things like idols and yurukyara but that’s probably just out of ignorance. Don’t try to argue with a Waseda graduate who wrote their thesis about yurukyara!

Bucho (producer Akira Kanzaki) is a salaryman who ends up ambushed by ninjas at the office and his romantic moonlight rooftop rendezvous with a cute co-worker goes terribly wrong when it’s revealed that she is also a ninja! That must have been an awkward next morning, even if Bucho didn’t end up getting drunk until the middle of the night! In addition to that, Emi sings a few lines in English too!

After fleeing the destruction of Earth in a rocket ship that they built in the MV for “Yume Nante”, Yurumerumo! seem to have landed on a barren desert world in the MV for “Mottomo Utsukushii Mono”. Another imaginative product from a group that always keeps their fans guessing what they will do next!

Vanilla Beans’ major label re-debut was highly anticipated ever since they prematurely announced it on August 29th, and this couldn’t have come soon enough! However, because this is a triple A-side single, we’re still wondering where the MVs for “Be-nius” and “lonesome X” are though!

In what might be one of the cutest MVs to feature a convertible Ford Mustang (we use “might” since some of you out there might consider SCANDAL to be cute in their MV for “STAMP”), Bandjanaimon! brighten up even the cloudiest days in the oddly named “NaMiDa” (Japanese for “tears”). Even though Yuzu Amanatsu has proven to be quite proficient on several instruments before, her driving seems to be a little erratic. Then again, if there were cakes floating around, who wouldn’t get a little distracted?

Once again, FES☆TIVE has managed to take the appeal of a Japanese festival and turned up the volume to 11! With 3,000 goldfish and visuals ripped straight out of the world of Mika Ninagawa, you might find yourself feeling like a fish out of water. Just keep breathing and replay as necessary.

There’s no secret that fans love seeing the girls in the 48 groups as delinquents and this time HKT48 gets things even more fired up with the legendary yankii rock group Kishidan, who also star along side them in the latest installment of the popular Majisuka Gakuen series “Majisuka Gakuen 0: Kisarazu Ranto-hen”. On any other release maybe the Yui Kojina centered “Buddy”, Showa-themed Nako Yabuki solo song “Ijiwaru Chu”, or even the Mio Tomonaga and Kanna Okada showdown “Yume Miru Team KIV” might have had a chance but, when the main song is this strong, there was no chance! Maji de!

KissBee went and even made an 18-minute long movie for this MV to set up this school love story. For those of you unfamiliar with the ritual of kokuhaku (love confession), it may seem odd that two girls who like the same guy would join forces instead of become bitter rivals but, maybe that’s just what true friends do?

Compared to their previous MV for “Now I Know”, this one is a little less cinematic but, as soon as the four members are awakened from stasis, the all hell breaks loose! Just know that things will not be anywhere this orderly when you see them perform this song live! PassCode proves over and over again that autotune in rock/metal doesn’t have to be bad despite the efforts of so many other bands who seem to have no idea what they are doing.

Picking just one song from the first SKE48 unit single was difficult but, if you have seen the full version for Caramel Cats’ song, the short version is just a small piece of the story, which has a surprise twist at the end! At a close second place (maybe just by a few hundredths/thousandths) is “Cup no Naka no Komorebi” because of the expansive stretches of nature and use of drones to capture all that scenery and Rara Goto’s smiles. “Aishiteru toka, Aishiteta toka” by Furumarion would have had a better chance if the director wasn’t so set on including so much of the extras at the expense of screen time for Nao Furuhata and Rion Azuma. There didn’t actually seem to be any rain in “Datte, Ame Janai?”, which is probably the only criticism about it. They were all good MVs/songs but, Caremel Cats’ “Ano Saki no Mirai Made” was the only one that had a story.

There was some competition from the peggies and Split BoB but BAND-MAID® ended up cleaning up in this category easily. “Don’t let me down” might have had a stronger “Cool Japan” factor with guitarist/vocalist Miku Kobato running through the streets of Tokyo in a maid outfit but “REAL EXISTENCE” rocked much harder by far, showing off the power and grace that the band shows every time they hit the stage.

It’s hard to believe that there’s just one more month in 2015! December looks like it will be quite an exciting month and hopefully there will be a lot more Christmas songs coming our way soon. A lot of things have changed in the idol world in 2015 and while some of it has been hard to take, not everything has been bad. At the very least Minami Takahashi’s graduation has been pushed back until March of 2016? One thing is for sure and that is that things will continue to change.