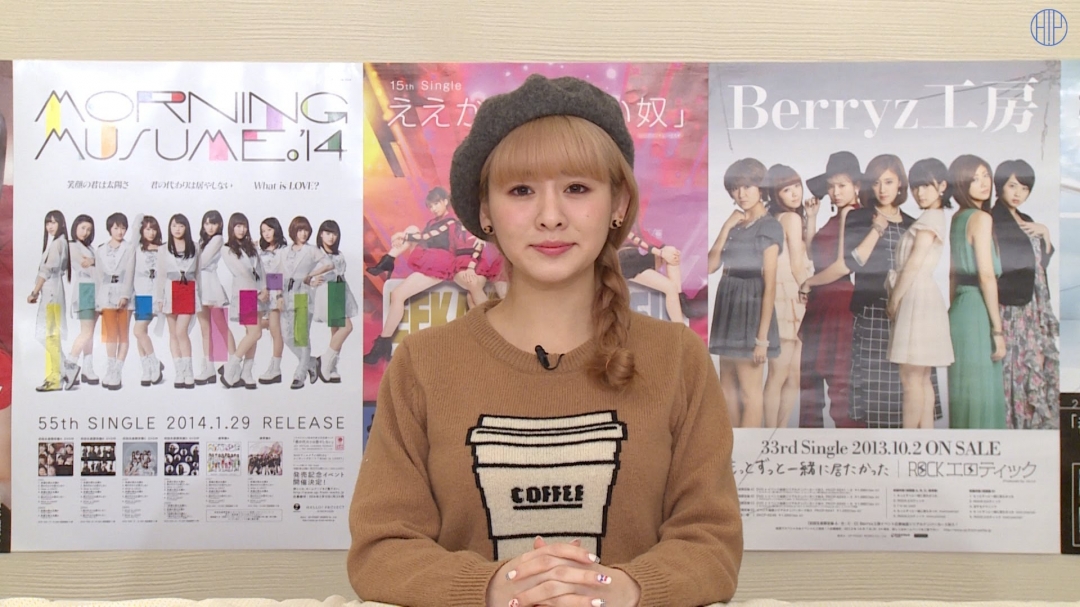 Hey guys, what’s up? Did you eat too much during the holidays? In Japan we call it “Shogatsu Butori (New Year’s gain).” Berryz new song, maybe the message from Tsunku♂ implying something 😉

This time Harosute features the H!P Winter con held at Nakano SunPlaza on January 5.
MC Ri-chan spoke freely about impressions and her relationship with each groups.
The Berryz new song “130 million total diet Kingdom” will be released on Feburary 19. It will be double A-side single, the other title is “Otona nanoyo! ( I am an adult!)”. Risako “Let’s diet together (laugh, laugh).”

MM.’14 revealed live version of the new single “Egao no Kimi wa Taiyo sa” to be released on January 29. Risako said “Berryz can’t move that quickly, it’s so cool to watch. MM.’14 and Berryz have been dancing together at the opening of the Winter con Goisu Mode, I’d be happy if you checked it too. By the way I’m glad very much that young MM members, including Sato Ma-chan come to talk with me recently, because the relationship between them was only exchanging greetings until now.”

ºC-ute performed “Ai tte motto Zanshin”. MC Risako “In the back stage I often see ºC-ute stick to synchronize the dance very hard, that’s one of big differences from us, we do the same but not that much, impressive. By the way I never hung out with Maimi since we’ve met. So I want to spend some time with her this year. Also, I haven’t gone out with Airi for a long time, I want to go to places like an amusement park with her. The rest of them are comparatively intimate, please get along this year too.”

S/mileage delivered “Ii yatsu”. Following the last year S/mileage seems improved its hot performance. Risako “Since the Naruchika live last year, I have been getting along with them, especially Kanon. I e-mail with Kanon everyday. We went to a shrine together for New Year’s visit on New Year’s day. I am glad because I didn’t expect to become such good friends with her. Therefore, I want to keep the relationship with her in the future, as a good rival too.”

The cute voices of Juice=Juice inspired MC Risako. “I haven’t sung a song with that cute voice for a while, maybe I should study that kind of vocalization more.”

At the end of the program, Risako concluded the show “I made a lot of mistakes reading the lines. Now I have been threatened by H! P Station staff that a collection of those mistakes will be on air. Such I will be twenty years old finally in the three months from now. I want to a wonderful woman whom many girls are longing for. Please support me!!”

She took over the show brilliantly. That’s our Risako!!

Thank you for reading, check the bonus footage too!! See you next week 😉