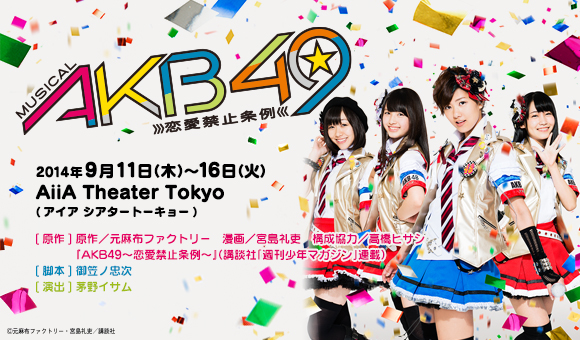 AKB48’s manga series about a boy who dresses up as a girl to join the group under the pretenses of protecting a girl he likes is getting a musical adaptation and the cast for the limited-run of the show has been announced! Unsurprisingly, Sae Miyazawa (SKE48/SNH48) has been cast as the lead character Minoru Urayama/Minori Urakawa.

Mako Kojima (AKB48) and Nana Owada (AKB48) have been double cast as Hiroko Yoshinaga, the girl that Minoru joins AKB48 to watch over.

The play will run for only six days with two performances each day starting at 1:00pm and 6:00pm, so get your tickets as soon as possible!