If you want to take a rest from the crazy heat, I recommend watching a movie in a cozy room. Without going outside, you can feel the summer through these anime films! With 3 up-coming movies, here are some of the recommendations of anime movies you should watch during summer break!

In a virtual world called “OZ”, you can use your avatar to associate with others all over the world. In OZ, you can do shopping and games as well as administrative procedure such as payment of taxes. One day, a young math genius, Kenji Koiso decides to do a part time job for Natsuki Shinohara, his sempai whom he admires. He visits her relatives, Jinnai family in the countryside. When they arrived, Natsuki tells Kenji what he is supposed to do for his job, and Kenji finds out that he needs to pretend to be her boyfriend because Natsuki had lied to her grandmother that she has a boyfriend and will introduce him soon.

The Girl Who Leapt Through Time

Makoto Konno, Chiaki Mamiya and Kousuke Tsuda are three good friends who go to Kurano High School, but their relationship changes due to the ability of “time leap”.

On July 13th, Makoto finds something and tries to pick it up at the science laboratory. Then, she leaps to a mysterious world and comes back to where she was in a blink. On her way home, she gets involved in an accident due to her broken bicycle, but she uses “time leap” and made the accident like it never happened. She notices her ability and use it to have so much fun. 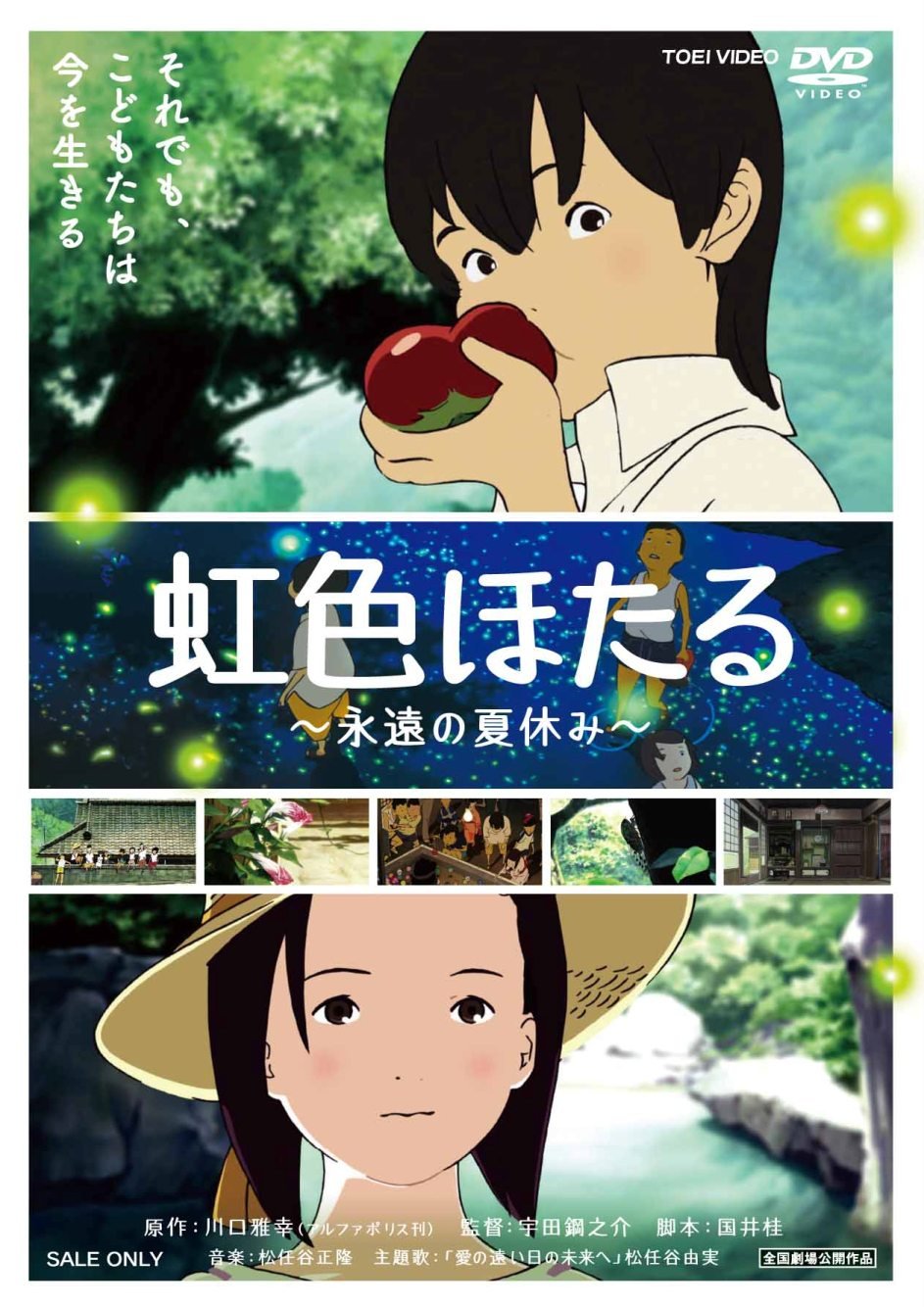 Yuta, who lost his father in an accident visits the forest near a dam where he made many memories with his father. Then, he finds an old man who says, “I’m thirsty. Give me something to drink.”, so he gives the old man his drink. He starts collecting insects, but he can’t find any beetles and falls at the cliff. When he wakes up, the old man appears saying, “You barely made it.” and leaves. He finds out that he is in 1977, and it is the last summer of the town before it sinks at the bottom of the dam. His ever-lasting summer vacation starts.

A story of two high school students, Futaba Miyamizu and Taki Tachibana. Futaba lives in the countryside and dreams of visiting Tokyo, and Taki lives in Tokyo with his father. This two had never met but one day, they find out that their body has been exchanging several times when they fall asleep. They were confused but continues each other’s life, and suddenly the exchange stops after a certain day.

Hotaru Takegawa is a 6-year-old girl who was visiting her grandfather. She gets lost in the forest of Yamagami which is known for the home of Youkai (monster). She meets Gin, a human-looking Youkai which lives in the forest, and he helps her get out of there. He tells her that if he is touched by a human, he will disappear, but they become friends, and she visits Gin every summer.

Pepe is a professional cyclist who belongs to Pao Pao Beer Company. During “Vuelta a España”, one of the three biggest cycling races in the world, the owner tells Pepe that he is fired. By a coincidence, it was the same day as the day of his brother’s wedding with Pepe’s ex-girlfriend, Carmen. Also, the race course was set at his hometown. The manager tells Pepe that “The owner might change his mind if you do a good job.”, so he decides to do his best by supporting the ace rider, Gilmore, but Gilmore retires in the middle of the race due to an accident. Pepe keeps pedaling as he thinks that his job is all he’s got.

Anohana: The Flower We Saw That Day – The Movie During elementary school, Jinta Yadomi, called as Jintan was hanging out with 5 other friends at their secret base every day, but one of the girls, Meiko Honma, called as Menma suddenly dies. Because of this, the others lose touch of each other. 5 years later, Jintan who became a high school student sees the ghost of Menma, and other members start gathering again.

Asahigaoka Branch School only has 5 students. They are different in grades and personality, but they enjoy the life in the countryside together throughout the year. One day, they win a prize in a raffle and gets flight tickets to Okinawa, so they decide to go there during summer vacation.

It’s the movie of “Non Non Biyori”, anime TV series known for the shout of “Nyanpass!”. A new character, “Aoi Niizato” will join the movie.

Aoyama-kun, a 4th grade student keeps notes of the things he learned every day. He thinks that he will be a great man in the future as he is smart and studies hard. For him, the most interesting thing is the young lady at the dentist. He was doing research about her as well. Right before the summer vacation starts, penguins suddenly appeared in his town. How is it possible that they appear and disappear in the town with no ocean? To solve the mystery, he starts his research “Penguin Highway” and witnesses the coke can which was thrown by the young lady turning into a penguin. She says, “Try solving this mystery. Let’s see if you can do it.”

It’s based on a story written by Tomihiko Morimi who also wrote “Night Is Short, Walk On Girl”. It received Animation Award at 22nd Fantasia International Film Festival held in Montreal, Canada. For this movie, Hikaru Utada wrote a new song, “Good Night”

Each 3 storyline has a different theme, but they all deal with the feelings of nostalgia, youth and remembrance.

Hidamari no Choshoku (Sunny Breakfast) is about a young man working in Beijing who recalls the childhood he spent in his hometown with his grandmother. He remembers the pleasures he had during that time, but he gets a call informing him that his grandmother is very sick.

Chiisana Fashion Show (Small Fashion Show) involves a quarrel between two orphan sisters. The older sister, who wants to become a model, faces difficulties in her work and life, and she takes it out on her sister, creating a gap between them.

Shanghai Koi (Shanghai Love) exposes a love story of a young man in the Shanghai during the 1990s. He loves his longtime childhood friend but never confessed his feelings to her. The time passes, and when they are living apart as they became an adult, but an event occurs, bringing them back together.

It’s the newest film by Makoto Shinkai who also directed “Your Name”. It is a collaboration with Haolin Lee who admires Shinkai after watching “5 Centimeters per Second”. Lee is the representative of Haoliners which is the leading company of anime market in China. The story is set on three cities in China.