Yurumerumo! Hits the Streets to Promote Their Tour Finale at Akasaka Blitz! 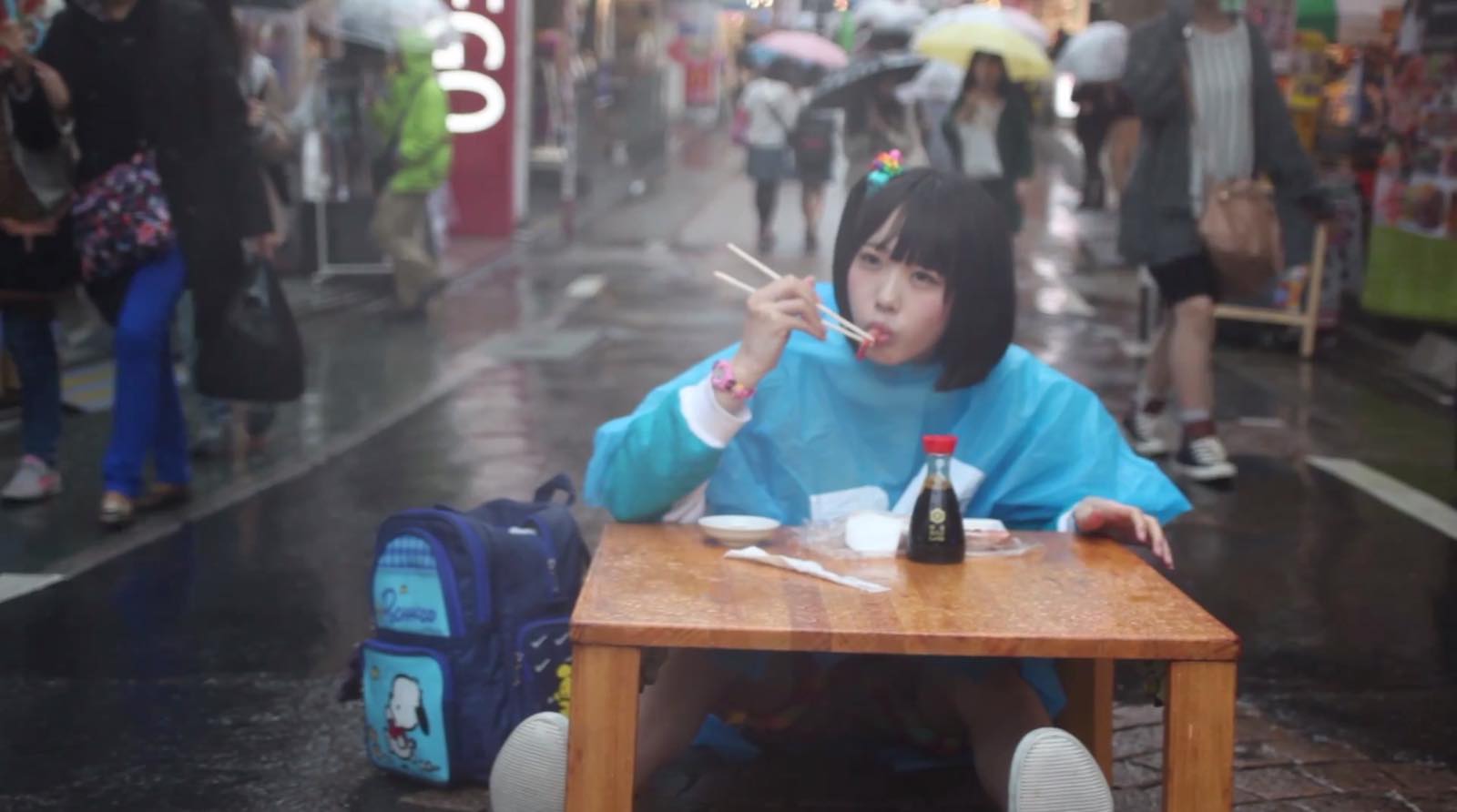 With the finale for their first Tokyo/Nagoya/Osaka tour “Tou/Mei/Han (Tokyo/Nagoya/Osaka) dayo! Zen-in Hamidasu-mo!” on May 2nd rapidly approaching, Yurumerumo! is doing all they can to get every last person there to make it a success. Even though their first time in Osaka at Namba Rockets on April 19th was a surprise sold-out night, it seems they aren’t taking any chances in their hometown of Tokyo either.

Impulsively deciding to go out and do her part, Ano went out to Shibuya, Harajuku, and Shinbashi on a rainy day to do some “guerilla marketing” for Yurumerumo!’s tour finale.

Waling through the famous scramble intersection in front of Shibuya station, Ano shot off a confetti cannon in the middle and started singing to people as they crossed in all directions.

Moving to Harajuku, Ano set up a folding table at the entrance to Takeshita Street, sat down and proceeded to eat shrimp sashimi as the crowds walked past her.

Ending up at Shinbashi in the early evening, Ano puts on a sandwich board and uses a megaphone to root for the office workers going home with an impromptu series of cheers and shouts.

mone (below) went down to Akihabara to try advertising as well.

It seems like they even won over the support of “Mr. Soy Bean” who they defeated in his attempts to turn all the water into soy sauce. You can see him advertising for Yurumerumo! in Harajuku and Shibuya.

He even lifted ano up on his shoulders in the middle of Takeshita Street.

With a few days of release events at Shinjuku Tower Records before May 2nd, Younapi and chiffon were passing out fliers and taking pictures with fans near Shinjuku Station on April 27th.

Even with so many ways to promote oneself with technology available now, sometimes going out and seeing the people is the best? If that wasn’t the case then why do idols do so many events where they can meet and talk with their fans? Currently, there is an election (aside from the AKB48 Senbatsu Sousenkyo) and it is common to see/hear the politicians out in front of train stations and driving around with loudspeakers to make voters aware of them. Babyraids JAPAN was notorious for standing outside the events of other idols and advertising themselves. Many smaller idol groups still do it.

If you purchase your tickets early, there will be a DVD that you can receive upon entering. Lastly, there will be a full band appearing with them including: Kazuma Hashida who has composed several songs for Yurumerumo on guitar and a full horn section! There is still time but it is ticking away so if you’re a fan, get yourself to Akasaka Blitz on May 2nd!