Their first overseas live was held at Hong Kong, about 150 fans from Hong Kong and other aisa country, of course include Japan, went craze for their great performance.

9nine has no overture (stage opning song) like other idols,
this time, they acted cool dance performance at first.
1st song was “Colorful” (tied up song with “Star Driver the Movie”) and 2nd song was “Evolution No.9”
When intro sound of “Yi, Er, Jiang Shi! feat. hao hao Jiang Shi Girls.” was lived, big shout was occured from Hong Kong fans!
I hope “Yi, Er, Jiang Shi!” will be the 9nine’s global killer tune.

MC part, they greeted in Kantonese.
What I was surprised most, almost all Hong Knog fans can understand Japanese, 9nine members were also amazed about that.
It was really helpful for them to be relax and their good performance.
Members talked about the shopping in Hong Kong.
Ukkie (Uki Satake) told her episode that she successed discounting the price of fashion bag. Chapon( Sayaka Nishiwaki) asked Hong Kong fans, “Is it great to discount 80 HK$?,” but fans laughed and reply “It’s really normal.”
9nine members asked thier fans to go shopping together and discount more in next Hong Kong live.
Although 9nine members short stay, they seemed to enjoyed Hong Kong.

They showed thier great singing ability in “Koizora,”
“Shining Star.” “One Kiss,” the stage and audience was heat up and go as one.

As soon as the live end, fans started to shout “Encore!”

In “Konwaku Confuse,” all of the audience swing around their towles and stick lights. Live house went really hot and the scene was totally same as live in Japan.
The last song was “Cross Over,” same as tour now held in Japan.

After the live performance, fans attend the shake hands event and autograph meeting.
I was moved that fans in Hong Kong practiced Japanese like “I love you,” and “Could you write down my name?” seriousely.
It was first time to talk with 9nine members for many fans in Hong Kong, some are really excited and some said like “I’m getting nervous…”

After the live, fans waited in front of the live space to see of 9nine.
I felt the Hong Kong fans loves 9nine same as Japanese fans.

All 9nine fans in Hong Kong hopes them to live again, and I also hope them to live in other part of the world.
I believe their performance can beyond the language barrier and I think
it was the best first greeting to the world for 9nine! 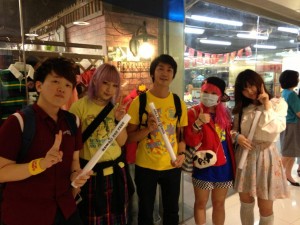 Photo with the reporter and fans of Dempa gumi Inc. from Hong Kong.

I am the Chief Idol Officer of Tokyo Girls Update, known as "Hiroro Ojisan" who loves Maachan. I produce the MV, art works, promotions, and tie-in campaign of idol groups such as "Team Syachihoko" and "Negicco". Please contact me if you know any "hanare-me" (wide-set eyed) idols.

Momoiro Clover’s album of indies songs ‘‘Iriguchi no nai Deguchi’’ to be revealed!

≠ ME Nanaka Tomita Delivers Bright News! Her First Hometown Broadcast to be On Air!

Announcement on Ending The Service For Premium Membership and Premium Content