The Space And Escape For Intimacy: The Love Hotels in Tokyo 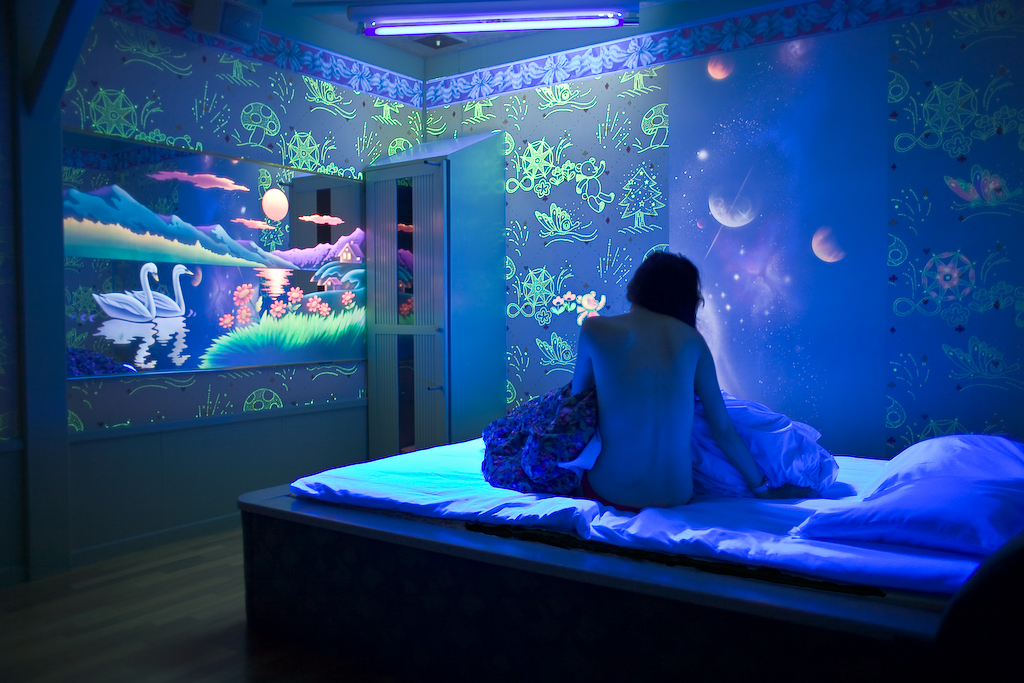 As of now, Love Hotels are unavoidable for tourist visit. From my past experience, it was difficult to define the term “Love Hotel” to my friends in London, because it is not a “motel” since it’s not just a cheap accommodation, or actually a “hotel” since it proactively provides the space for intimacy and sexual encounters. Even “Love Hotel” page is specifically made in Wikipedia, and defines it concretely as “short-stay hotel…primarily for the purpose of allowing couples privacy for sexual activities,” differentiating with the traditional “hotel” or “motel.” Taking this opportunity, this article is about the Love Hotels specifically happening in Japan, and mainly in Tokyo, as well as it’s currently used as an alternative for intimate relationship.

There are still the ambiguous starting of the emergence of the Love Hotels for being part of modern Japanese culture. Some scholars and researchers trace back from Yoshiwara, the government-funded red light district during Edo period, or during the American occupation after the war, as an intimate space for soldiers and prostitutes. As Michael Basil (2007) describes in his photo essay, “Japanese Love Hotels: A Photo Essay,” it has started as an industry from the 1950s and increased in number from the 1970s, due to rapid economic growth and increasing population of young consumers.

Currently in Tokyo, there are about 70 Love Hotels in Shibuya, 70 in Shinjuku, and 50 in Ikebukuro area, and because of the numbers, it is highly noticeable for many of the adults that there are “Love Hotel Area (rabuho-gai)” and has the industry. Then why so many concentrated in Tokyo? There is a basic understanding of living in Tokyo is narrow space without any privacy and Love Hotel provided as the place for married couple to engage in conjugal intimacy. Not only the environmental issue, but Ho Swee Lin (2008), scholar who have conducted in-depth research of Love Hotels (“Private Love in Public Space in Japan”), she writes as…

“Social changes brought about by economic and political developments since the collapse of Japan’s economic bubble in the 1980s have effected the changes to people’s sexual attitudes and behaviours. Japan’s love hotels play central role in facilitating some of these transformations by providing the main available private spaces in the public sphere for individuals to experiment with and develop different sexual experiences.” (Lin, 2008, 32)

As Japan still has the conservative aesthetics learned from Confucian morals and philosophies, the economic and political changes since the late 1980s surely refigured the social and cultural values, and as Lin (2008) pins it to these changes through Japanese women, playing an important role. From her research, women’s sexual liberation is one of the factors of keeping the Love Hotel culture until now.

There has been many cases that Love Hotels are used as the medium, because of it’s sensational architectural and interior designs. Many of the music videos are shot at Love Hotels as part of the scenery of Tokyo. But it includes the strong, explicit narrative of sex involved as well.

Also, because of the area itself and the narrative as a hotel, there are also some drama and film that are relating to Love Hotels as well. One of the most recent film, “Sayonara Kabukicho” starring Shota Sometani and Atsuko Maeda, takes place at the Love Hotel in the biggest red-light district of Tokyo, Kabukicho. 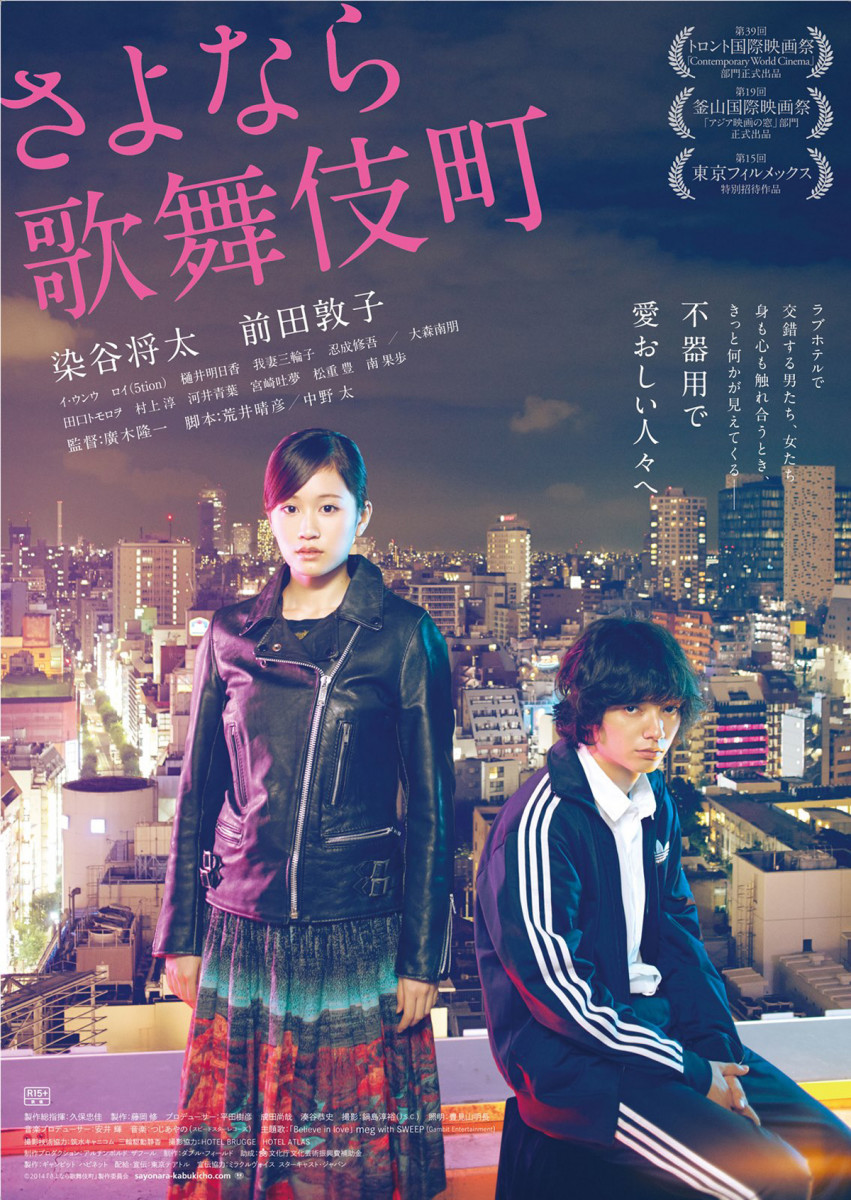 In the previous section I have briefly went over the discussion that independence of Japanese women has contributed to the proliferation of Love Hotels in Japan and the feminization of those sexual spaces have lead to more consuming of leisure. And still, young, open-minded women are the main consumers of Love Hotels, and now, it’s happening “sex-lessly.” What does that supposed to mean?

Cosplay Photoshoots
Not only within the media, but there have been many trends of Cosplay photoshoots happening at Love Hotels as well. The Love Hotels that have themed-rooms or facilities like pool are proactively promoting to the cosplayers for their photoshoots. HACOSTA is one of the promoters of “Hotel de satsuei (Photoshoots at Hotel)” who have established partnership with major Love Hotels, mainly in the Kansai region. 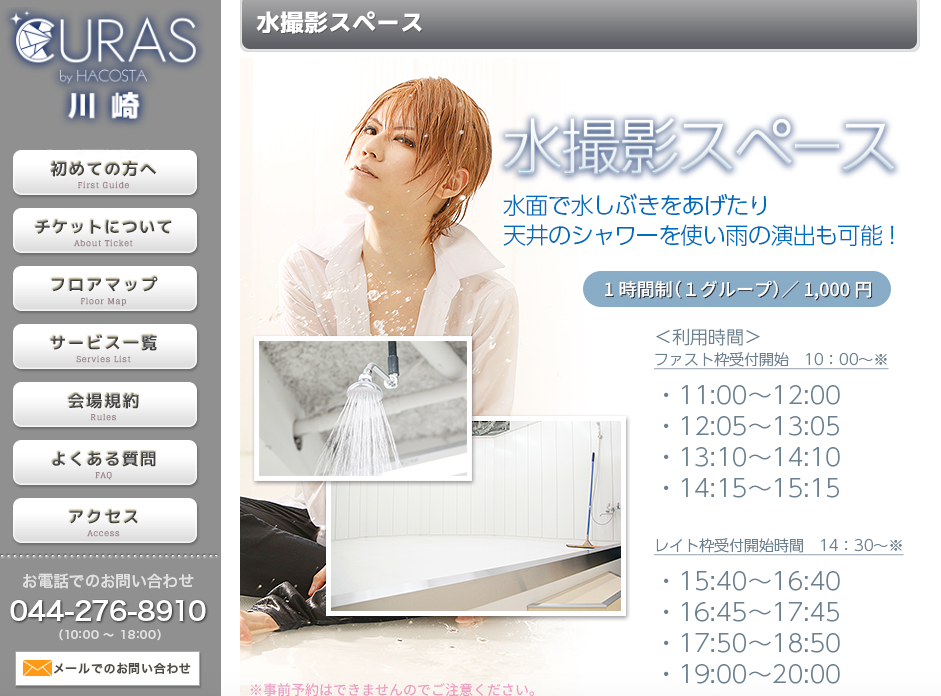 Currently, there have been many more Love Hotels that allow cosplay photoshoots through HACOSTADIUM, because of their extravagant interior designs. The stay for cosplay photoshoot allows for both day-time usage and overnight stay, so it also allows long-hours not only for photoshoot, but also having a cosplayer party with karaoke as well. Not only that people are satisfied with the fantasy-like atmosphere of the rooms, they can also have fun with the included facilities within the rooms.
HACOSTA Photoshoots At Hotels (Hotel De Satsuei) HP: http://studiohotel.jp/

Girls Night Out at Love Hotel
Not just targeting to the otaku girls and cosplayers, but also currently, there are many of the attraction-type Love Hotels that offers the “Girls Night Out” or “Joshi-kai” plan targeting to younger women to use the private space. Unlike, bars and pubs, using Love Hotels are more private, quiet, and free to do whatever that enjoyable to the users. Therefore, it is a suitable environment for the girls to have an intimate girl-talk as well as to relax like at a resort.

Bali An Hotel & Resort, the Bali-themed hotels in Kanto region, is the pioneer of promoting “Love Hotel Joshi-kai.” The Bali-themed hotel and rooms offers the very relaxing atmosphere as well as the privacy. Currently, there are seven affiliated store in Kanto region and their main hotels are in Shinjuku. The rooms that you can reserve online for “Joshi-kai plan” are the ones big enough for 3 to 10 women for the Girls Party Plan.

The entrance seems as if we’re going in to the narrow path through the woods but the lobby was very spacious with massage chairs in line, all-you-can drink booth, pool table and dart board, and with souvenir table. The lobby was open and welcoming as the atmosphere has changed from being in the middle of the city to a relaxing resort hotel. Since it is a Halloween season, the cute ghost with Halloween decoration welcomed us. 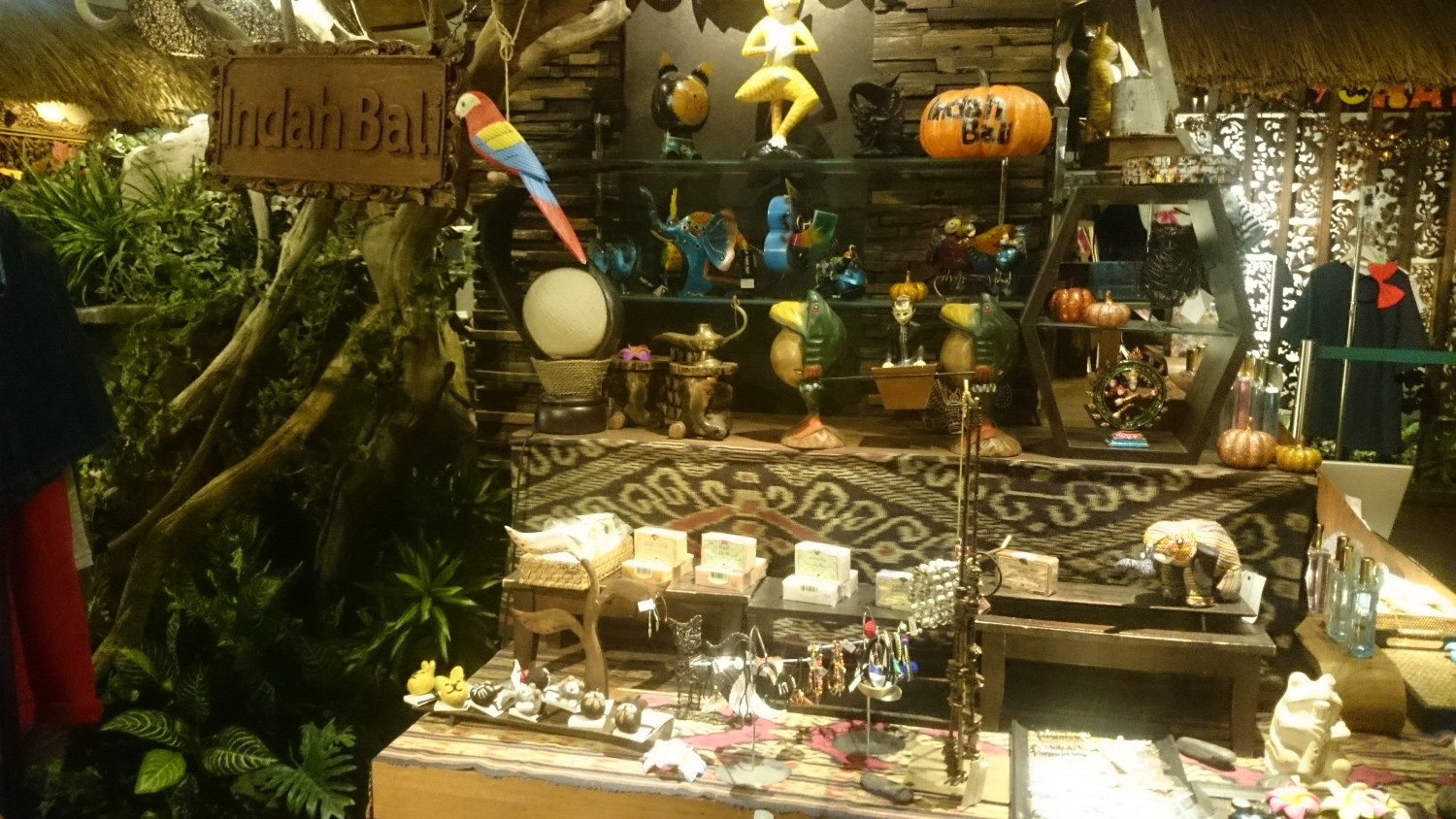 My girlfriends and I were worried whether we would be the awkward combination for people to enter the Love Hotel, but there were other groups of girls, who were at the lobby, that we were not necessarily the only girl group at the place.

At the check-in reception at midnight, the front desk will provide you some of the goods that are included in your stay. Toiletries like the sample-cosmetics and bubble bath additives were included as part of the stay, which is provided mainly for this specific sleepover plan. There were also some other toiletries that are provided for free for the lodgers, like bath salts, hair scrunchies, hair pins etc. 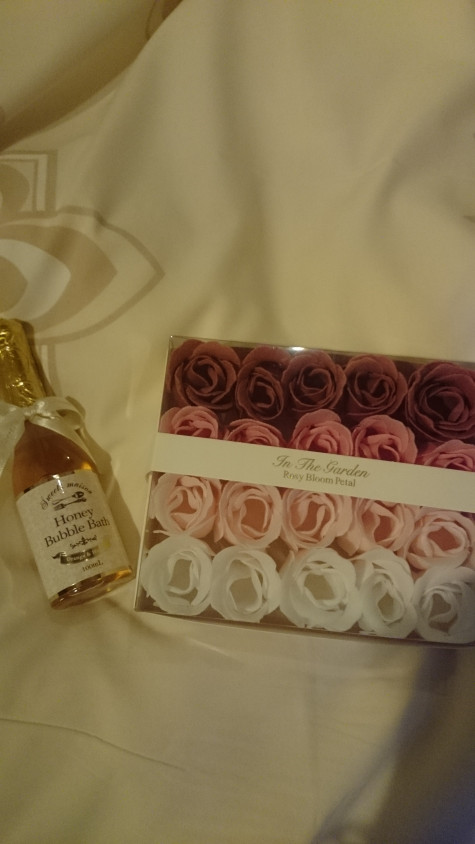 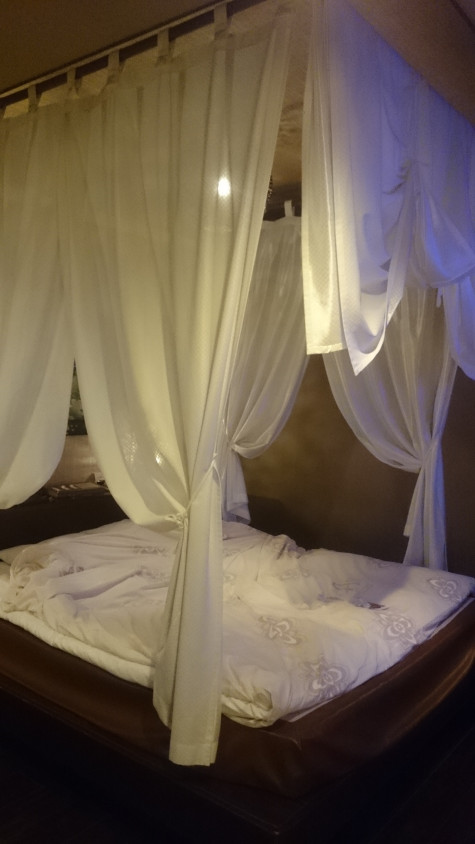 The Sweet-type hotel (for 3 women) has the king-size, canopy bed in the middle with massage chair and wood-style couch. Mainly, the girls will lie on the canopy bed and the wide-screen television that allows the many channels with latest on-demand movies. Also, there are many goods that you can call for lease at the front-desk, including joining terminal to connect to your tablet or laptop, to project on to the television screen. Also, the well-known pasela product, honey-toast is also delivered during the stay. You can call the lobby to order anytime during your stay. Some people use the honey toast for special occasion like Birthdays and Anniversary celebration and order the specific time to be delivered as well. 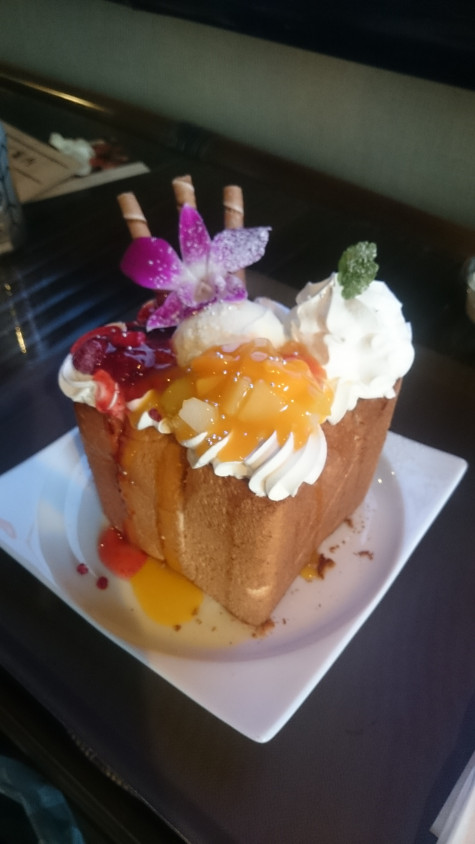 Overall, the girls and I were awake until 5:00AM watching movies on the wide screen television, and we just fell asleep on the king-size bed. The bed was enough spacious for three of us, but the one big blanket wasn’t enough to keep all of us warm. We missed our opportunity to ask for the honey-toast during our stay so as we ordered at the last minute, the staff brought it as our breakfast. It was a very relaxing for the girls and I just to have the room to ourselves and was able to shower (and to take a bath) and talk as much as sleep whenever you like. It was really like being away from the city, without traveling elsewhere.

It is just as Love Hotel is not only the space for sexual intimacy, but also an escape to the other kinds of space. How about get out of the busy life of the city and renew your friendship at a special, intimate space? 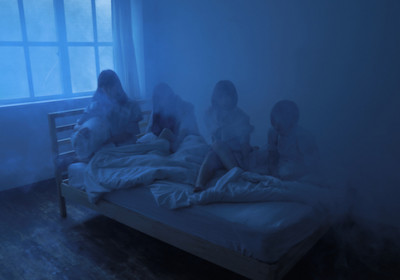