Warning: Use of undefined constant display_name - assumed 'display_name' (this will throw an Error in a future version of PHP) in /home/allbluetgu/tokyogirlsupdate.com/public_html/wp/wp-content/themes/Updaty/single-guide.php on line 62
highso on Apr.22.2015 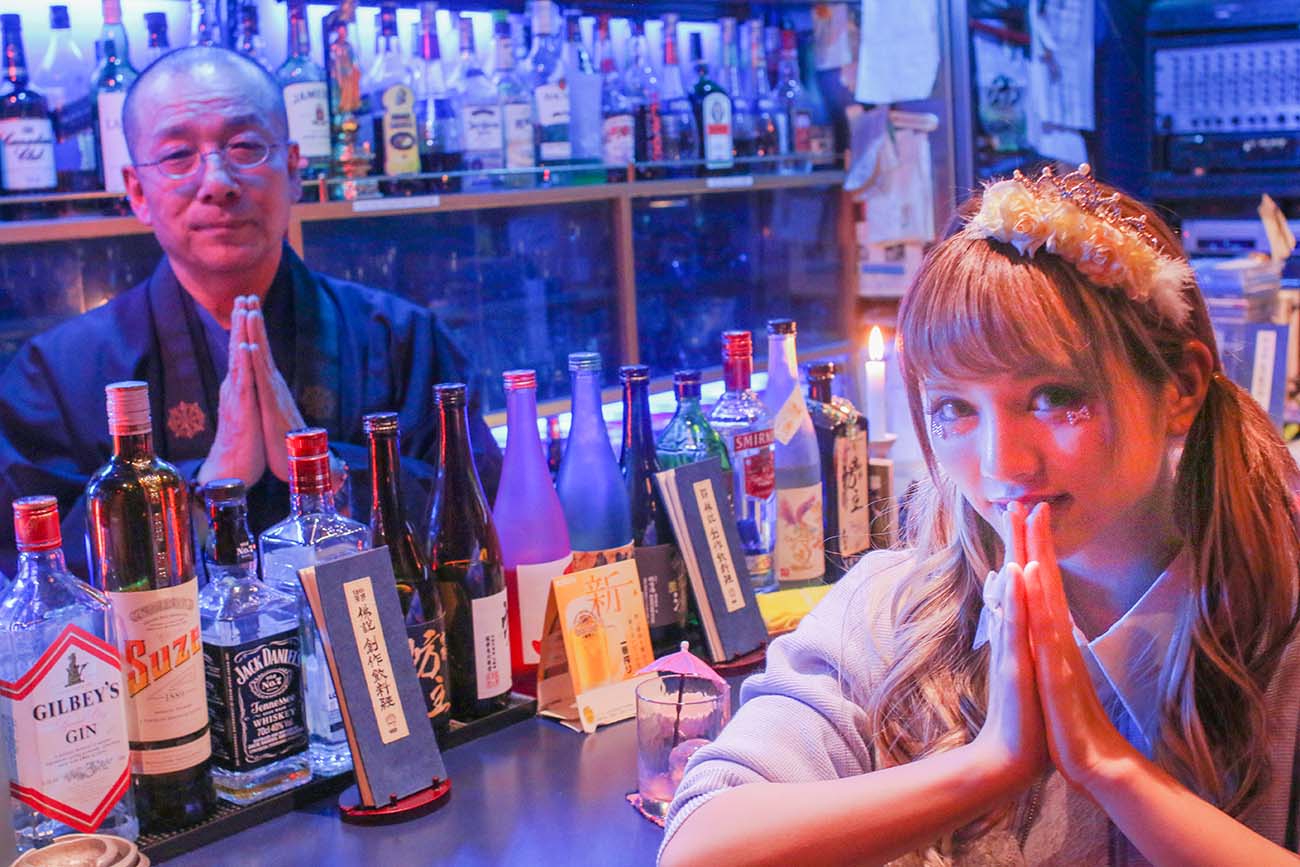 Slip past the hustling, bustling shopping district of Nakano and escape into a narrow alleyway. The scene that lay before you will make you feel like you’ve stepped through a black hole and found yourself in a totally different time period. The Nakano World Hall towers over all its surroundings; almost like a barrier hovering over the alley. 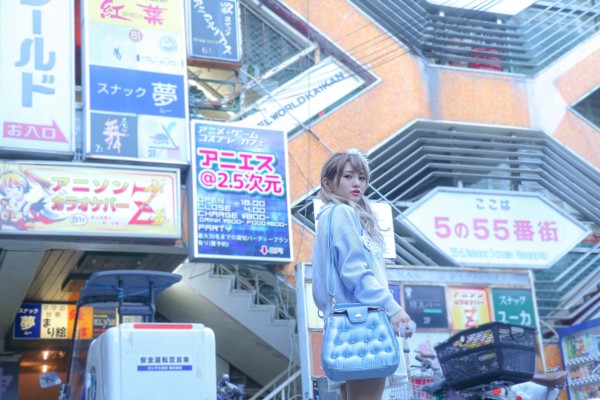 On the 2nd level of the World Hall you’ll find yourself at VOW’S BAR. Immediately after climbing the stairs, you’ll see the entrance before you. In the doorway hangs a long noren (sign curtain) that makes it impossible to see into the bar from the outside. If you are curious enough to enter, you will see a monk waiting to serve you behind a counter. Today, we met the VOW’S BAR master, ShakuGenko. 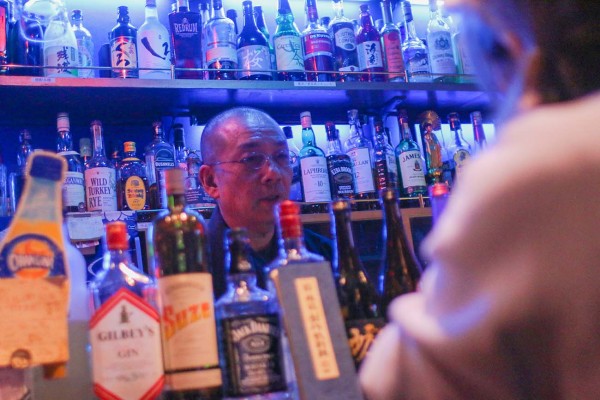 He is a real life monk of course. He is the monk of a shrine called Zuikouji in Osaka. In modern Japan, most temples provide performances and ceremonies only during the visits of the New Year and for significant occasions for families, and the number of people that frequent these temples for worship is very few. This is particularly evident in Tokyo. He want those who aren’t that spiritually involved with Buddhism to begin to do, so he continue to stand here at this counter, listening to what people have to say in an effort to positively encourage them.

The first thing that caught our attention was the menu, which looks almost identical to a sutra book. 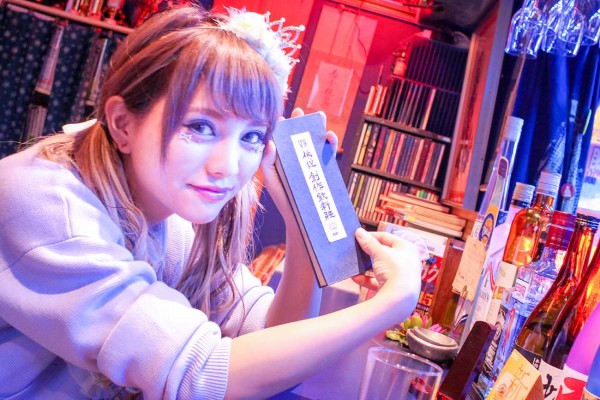 Even just by opening the menu you’ll be learning something new! Upon opening the menu, you’ll find yourself learning Buddhism 101 as it becomes a sort of accordion folded book that is filled with the names of original cocktails related Buddhist terms. 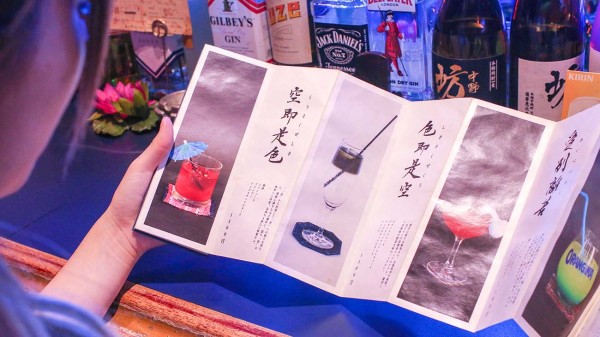 This menu’s contents tell of the Four Great Vows, which are shared by all Buddha. The origin of the bar’s name VOW’S BAR, is said to have originally be named after these VOWS. And, its origin is also BOUZU. (its meaning is a monk in Japanese)

Based on these 4 vows, it is possible to see the reasoning behind the existence of a bar that is run by a monk. First of all, the one that says, “we vow to save them all”.  Worldly desires are particularly frightening since humans are weak against the temptation to appease them. If a human doesn’t have worldly desires, they are probably no longer human; things like drinking alcohol are definitely unnecessary, but they still do them! In order for humans to live properly, they can learn about Buddhism in order to learn how to manage those desires wisely.

By defiantly saying things like “Humans are the epitome of worldly desires” and “We wouldn’t be human if it wasn’t for these worldly desires”, living life becomes so much easier for us because we can use these reasons to excuse our behavior.

We gave you quite an introduction, Today’s protagonist is Saaya, someone who was desperately seeking counseling at VOW’S BAR. She is not going well with her boyfriend. Of course, while sipping on an alcoholic beverage、almost anyone in that situation would be looking for a diversion. Take for example the commonly quoted phrase “Alcohol is equivalent to diversion” by Shinran. The alcoholic beverage that Saaya ordered was Kuusokuzeshiki. (It’s Japanese idioms and its meaning is Form is exactly emptiness, emptiness is exactly form.) 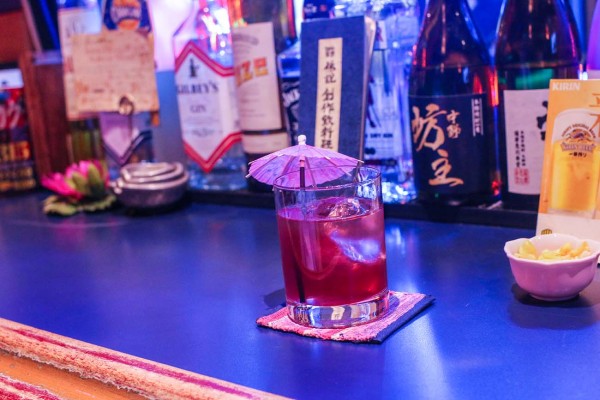 After receiving her drink, she hurriedly took a sip. 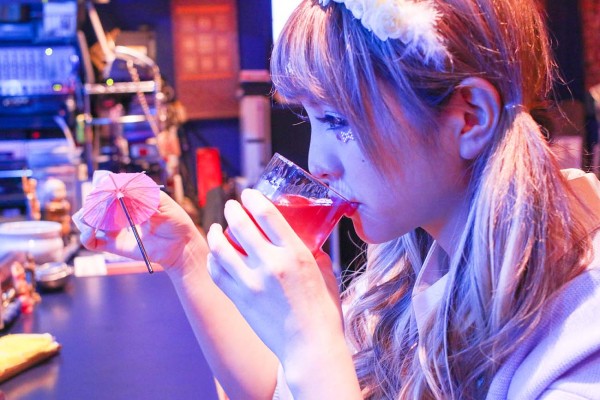 “It’s delicious!” she bursts, and without thinking, she began gulping it down. 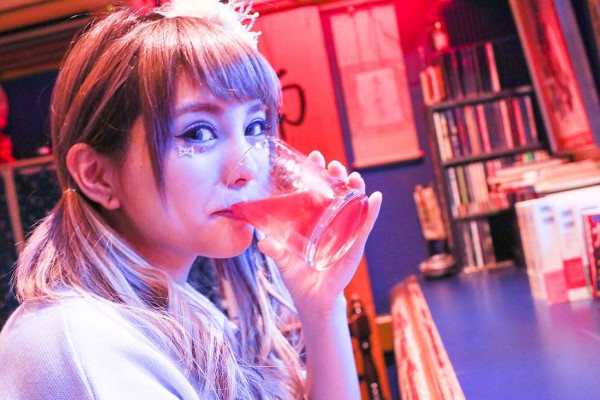 With alcohol in hand, she continued to tell her story. 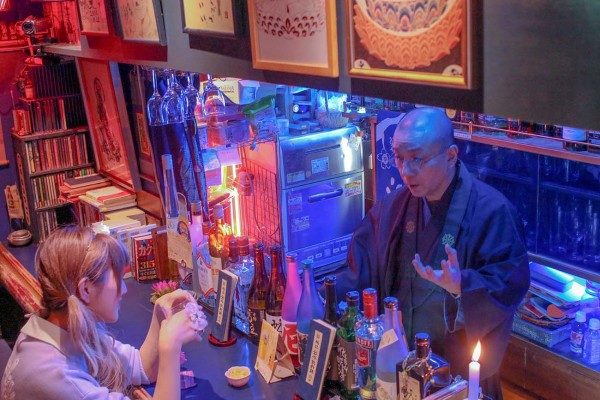 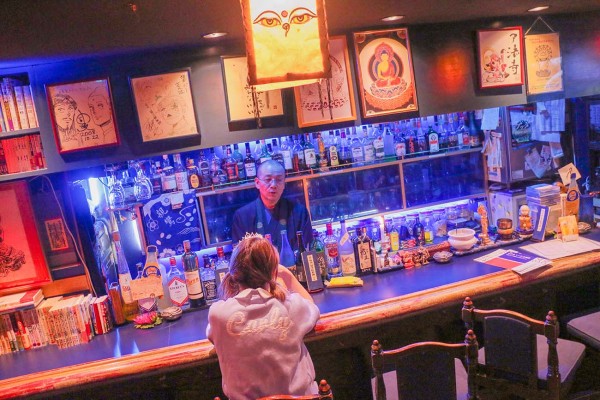 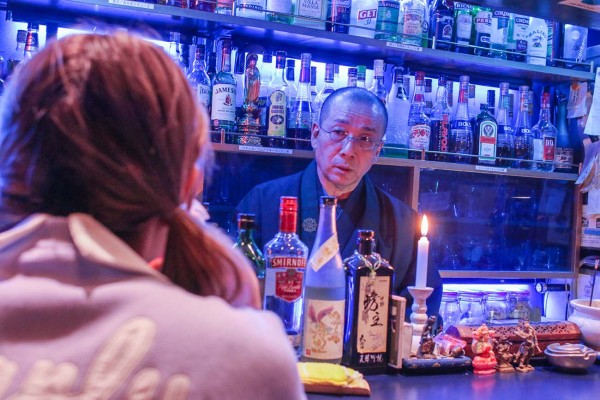 Then ShakuGenko’s words are penetrating a deep part of Saaya. 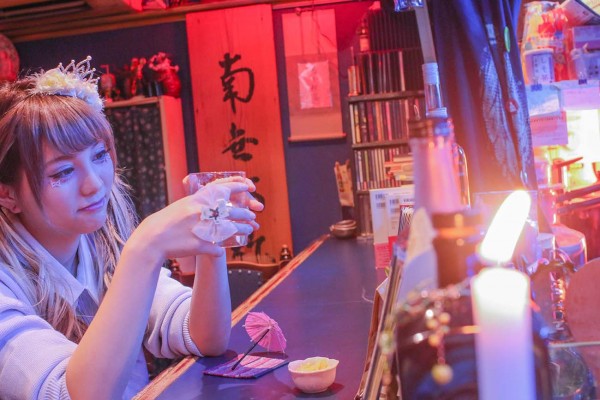 According to ShakuGenko, this is first-hand proof of how present-day people maintain anxiousness and worries in both their mind and body.
In that short time talking with ShakuGenko, Saaya was able to refresh her mind and heart, and gave us a nice pose at the end to commemorate the moment. 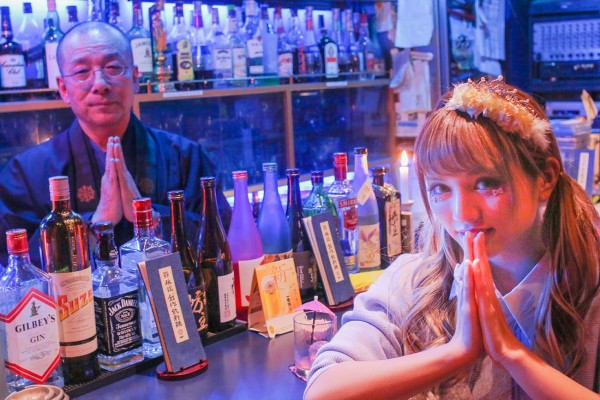 Just like Saaya there are many people seeking advice on love troubles. VOW’S BAR is a counseling hub for people that are going through tough times and will most likely continue to be so for many years to come. In order to accommodate more people seeking life counseling, a “sister store” named NISO BAR, was opened in December of 2014. At NISO BAR, real-life Buddhist nuns, as well as girls cosplaying as nuns are there to greet patrons. The grand opening is planned for May 1st of 2015 but in the meantime, they are open most days.

Photo by kobadog
Model by Saaya
Translated by Cheryl Coyle 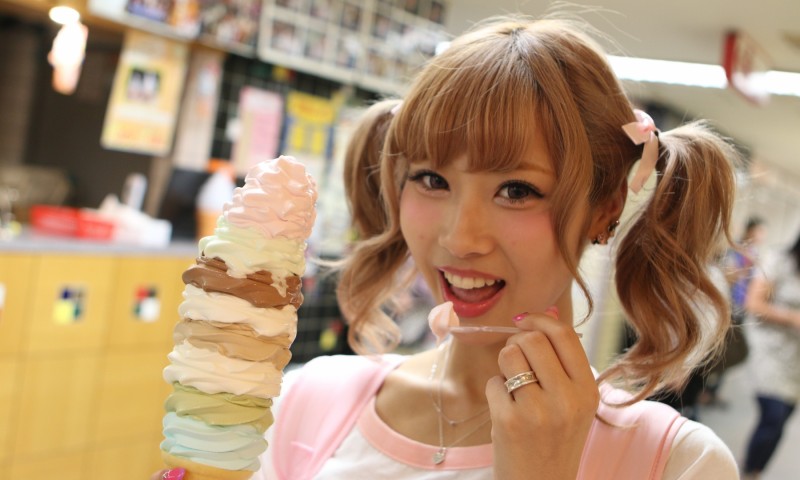 Get a Taste at Daily Chiko in Nakano Broadway! This 8-Flavors-in-One Ice Cream is Genius 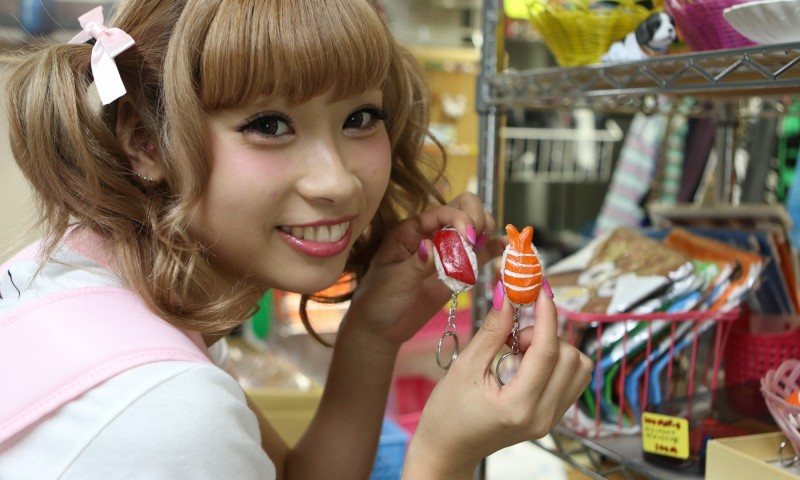 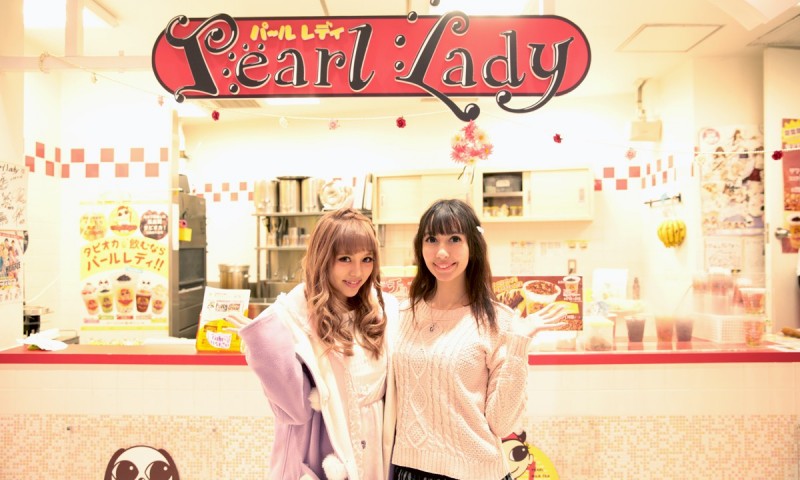 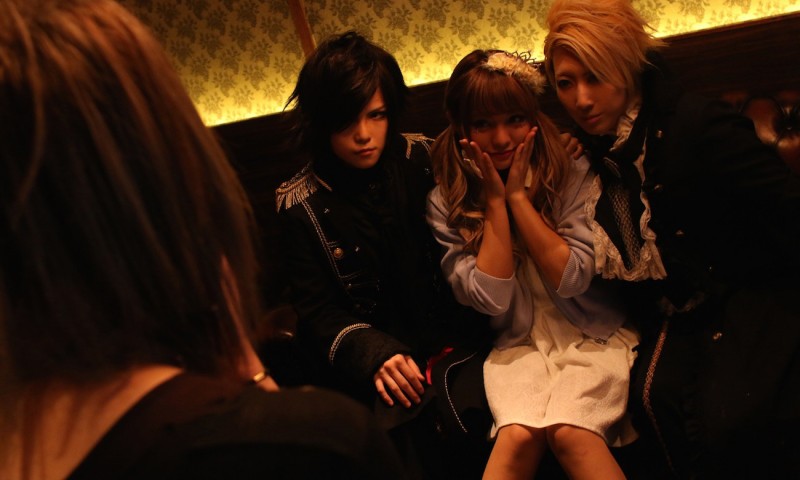