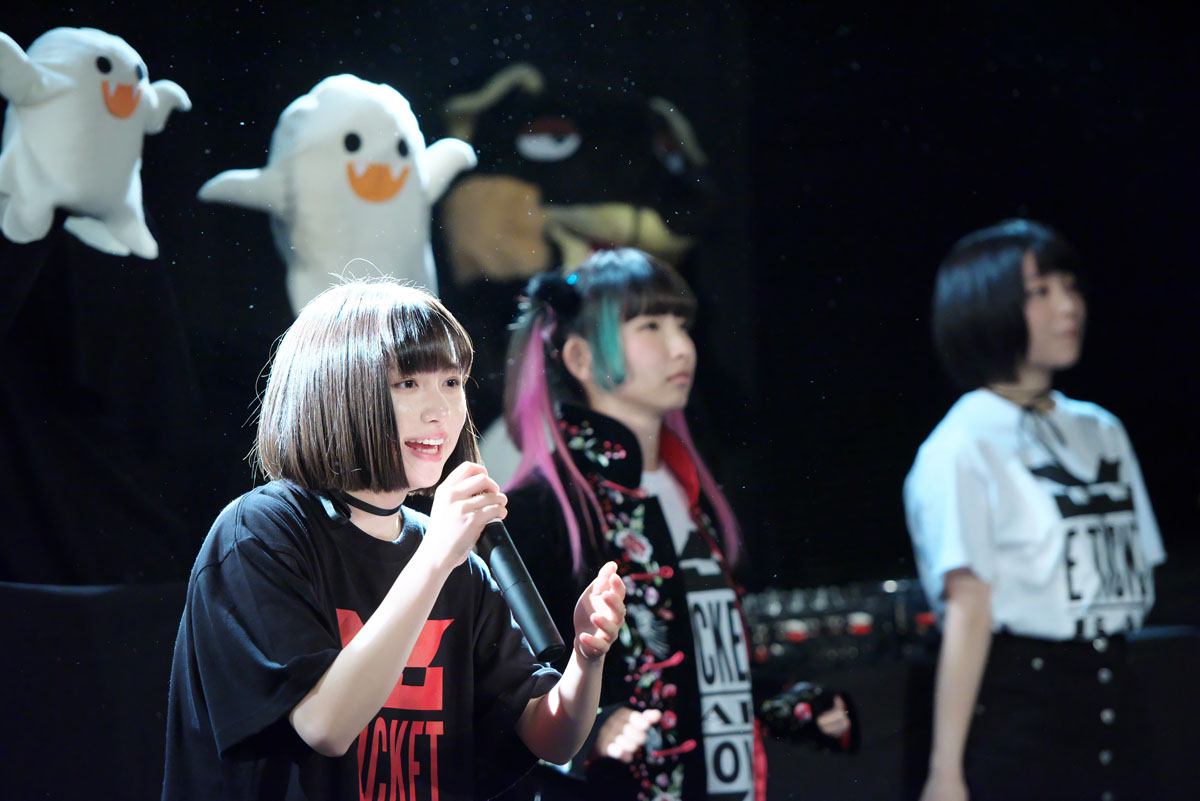 Some of the hottest idols in Japan got together for an afternoon of hip-hop and friendship at Daikanyama LOOP on January 8, 2017 for the E TICKET RAP SHOW release party.

The theme of the event focused around a puppet show about a middle-aged forest creature who wanted to have a party but lamented that they had no friends. Voices were provided by Yui and Aoi (MOE-K-MCZ). 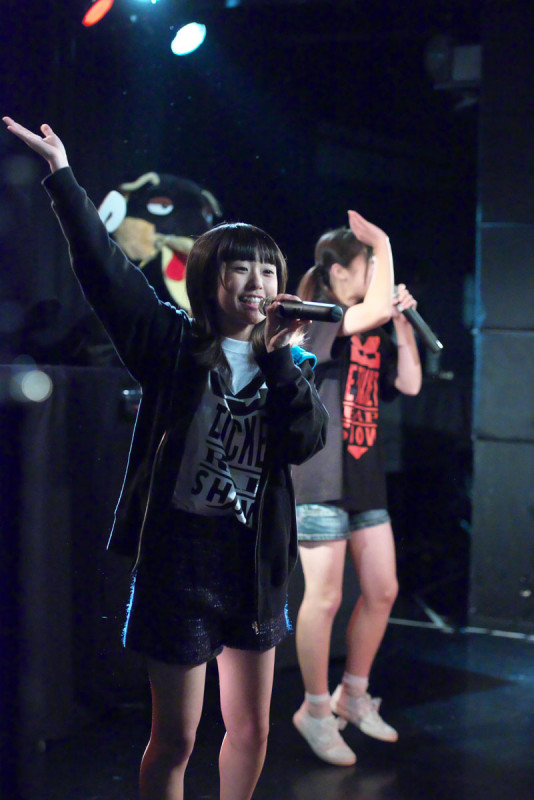 Natsuka Teraguchi and Mana Yamazaki (sora tob sakana) ran out onto the stage and got heads nodding to “AS ONE”, their young voices weaving through the densely layered old school hip-hop track. While it’s doubtful that sora tob sakana will be incorporating Teraguchi and Yamazaki’s rapping skills into their unique blend of post-rock and electro, it was a refreshing performance bursting with energy. 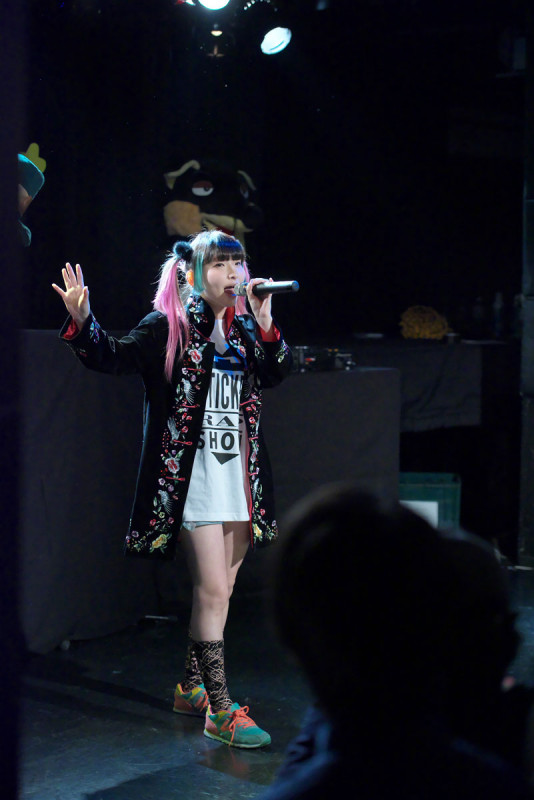 Another forest creature appeared and offered up their friendship, leading to the decision being made that they should go to an amusement park, providing the segue for Younapi (Yurumerumo!) to perform the bittersweet “GOES ON”. Her lyrics contrasting the happiness of fun times spent in an amusement park and the sad realization that such precious moments are fleeting, sliced their way through the dreamlike soundscape. 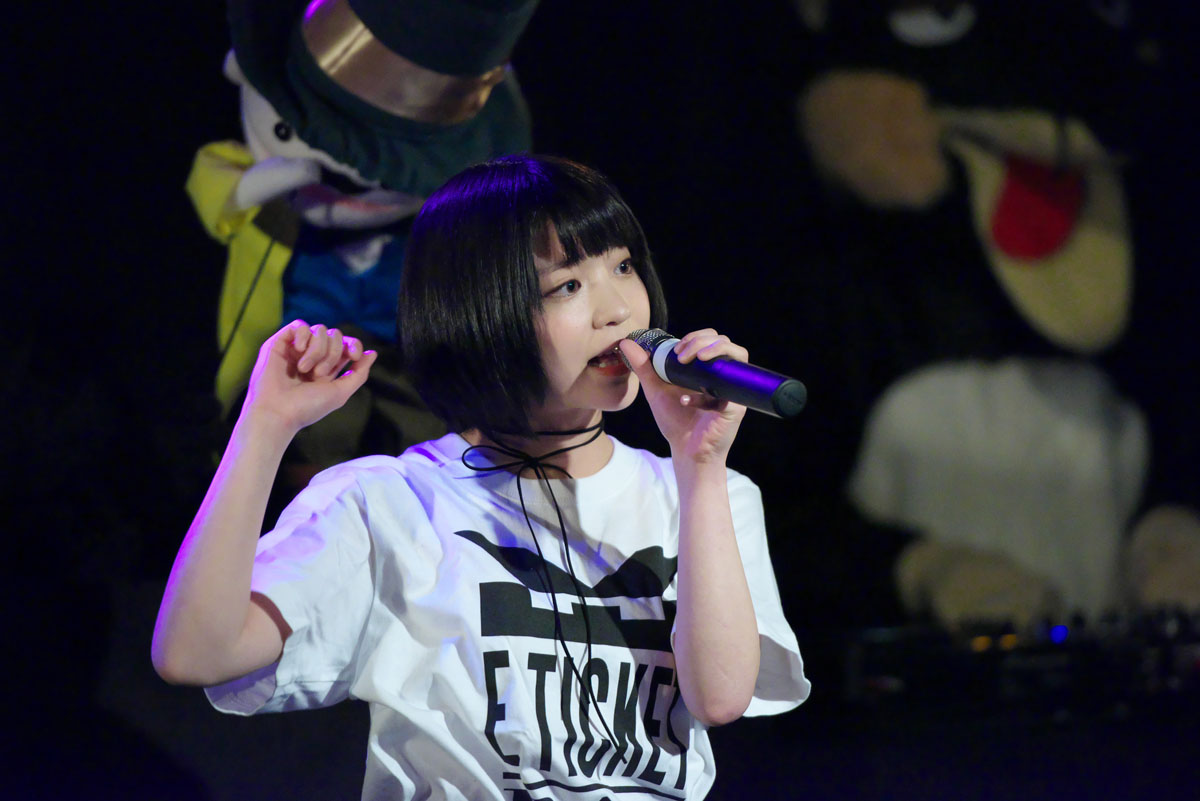 The forest creature explained that they had never left their home and stayed on the Internet the whole time. As if riding on drifting rainclouds, Nagi Nemoto (Niji no Conquistador) made her way to the stage, delivering a steady stream of rhymes accompanied by the downtempo haze of “Out Loud”, creating the mood of a rainy day spent indoors.

When asked what they did while staying indoors, the creature shared that they had gotten really good at looking through “matome” sites (sites which compile related links/information), a talent which received a lukewarm response. Regardless, it was pointed out that they had a lot more friends than they thought as more puppets appeared. At the same time, a warning was issued to be wary of those who tell lies. 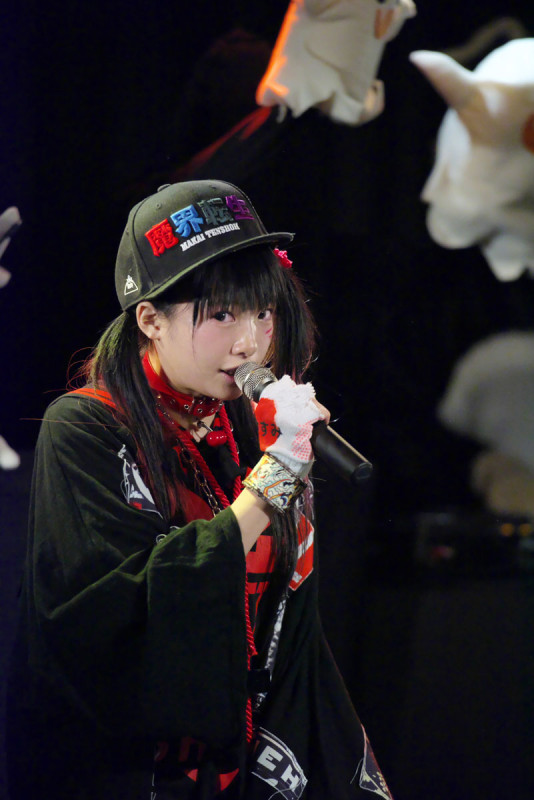 Shiina Pikarin unleashed a barrage of rhymes interspersed with several of her trademark death growls as she roared through “LIAR FIRE”, coloring the venue blood red. Commanding her loyal makaijin (fans) to die, they cheered loudly as she descended back to the demon world. 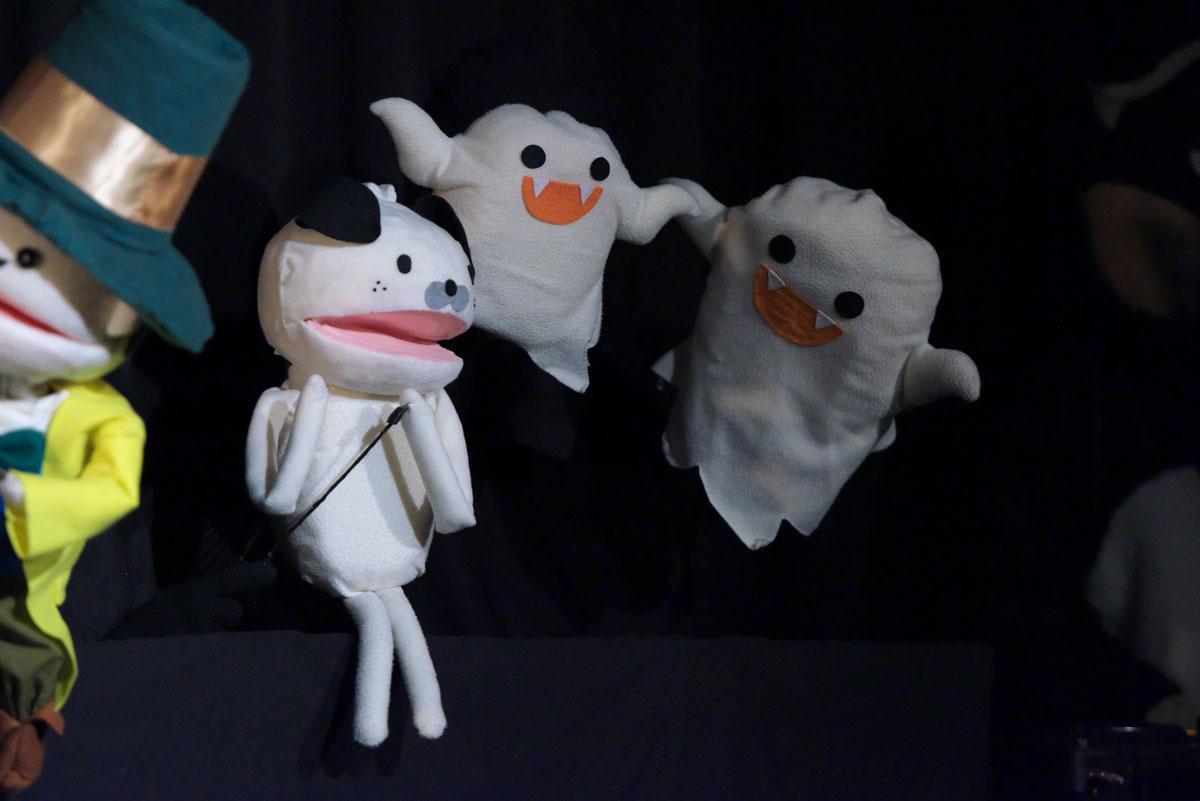 While it was agreed upon that lies are bad, sometimes they are necessary to protect people. In the end, the forest creature was not the same as they had been at the beginning of their journey and confidently declared that they would do their best to live freely. 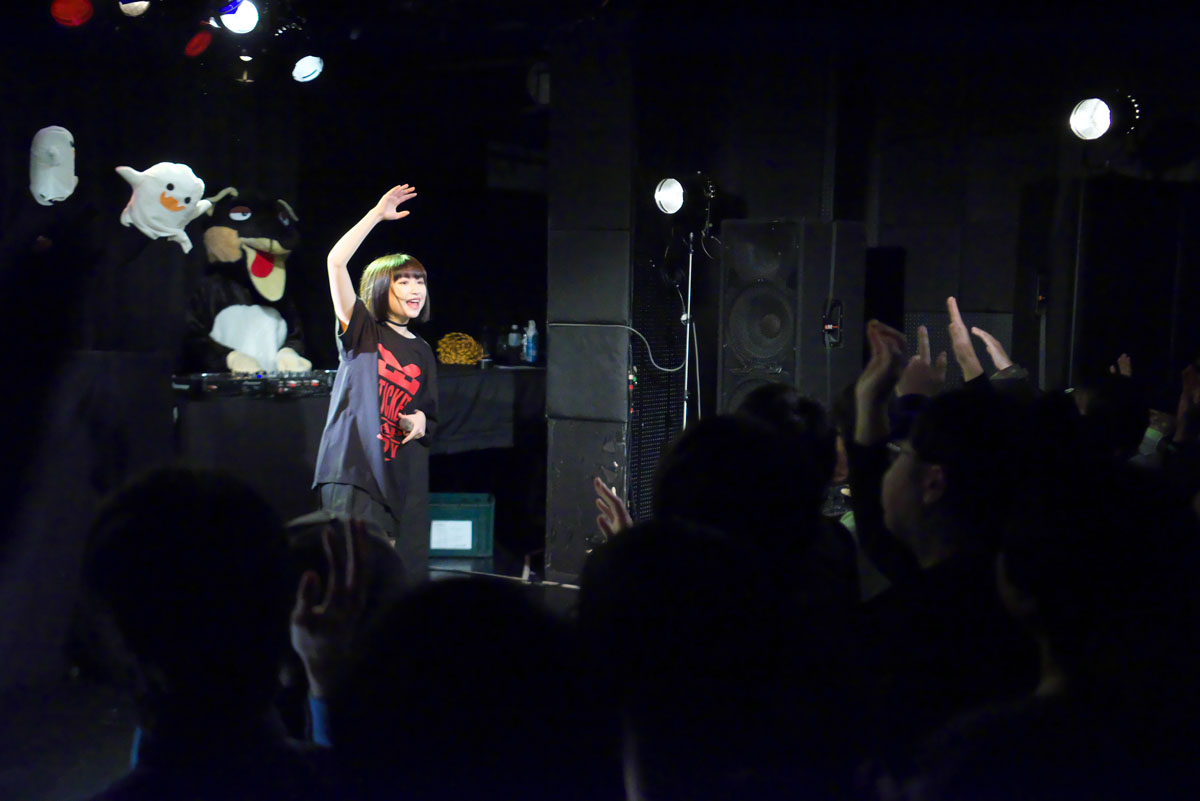 Riding high on a thick wave of funky clavinet notes, Rinne Yoshida had puppets and humans alike with their hands in the air as she blazed through “Rinne Rap 2”. The forest creature gathered up their courage and asked Rinne to become their friend, receiving a cheerful “OK!” and a smile in response. The temperature peaked as Rinne had the audience jumping excitedly to “Rinne Rap”. Declaring, “I want to have parties like this from now on!”, the forest creature brought the curtain down on their story.

After a few moments of encore calls, Rinne, Younapi, Nagi, Natsuka, and Mana returned (Pikarin was busy with her duties in the demon world). Commenting on their feelings about rapping, all of them agreed that they had fun, reminding the audience to come to the release events that would be held in the days to come. Performing “Rinne Rap” one last time with everyone (puppets included) dancing along, Rinne and the others put an exclamation point on the day, ending with a big jump. 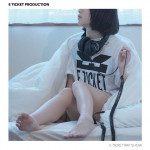 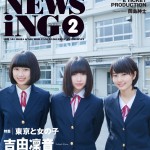 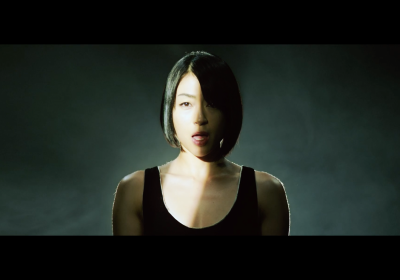 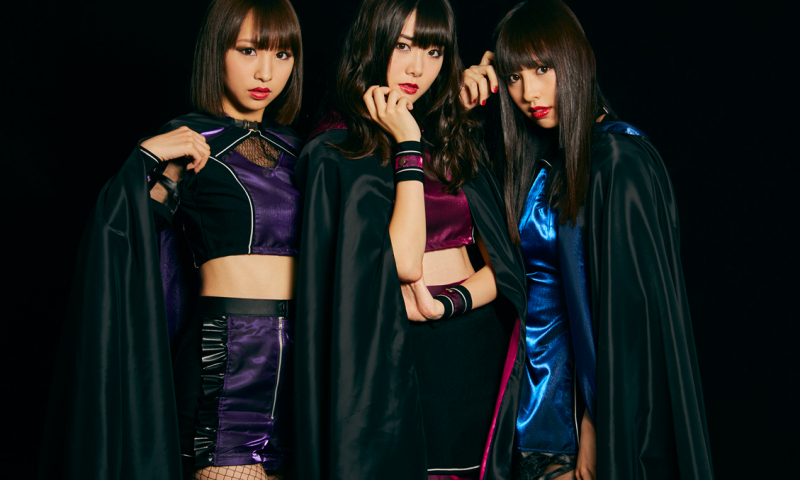 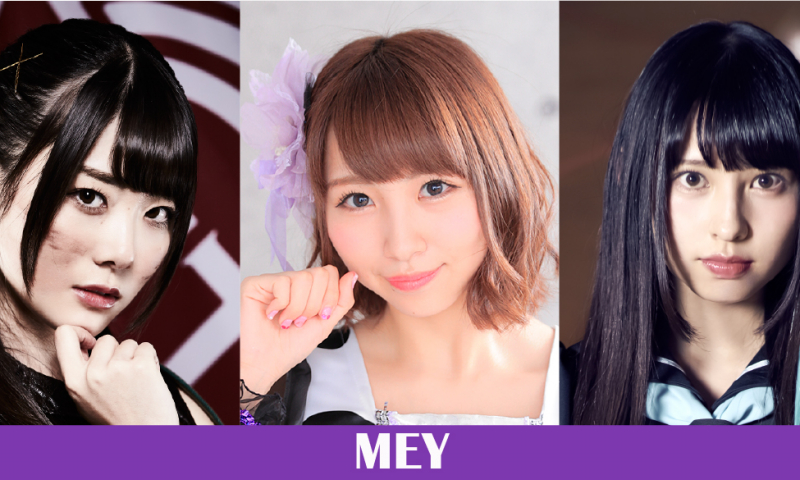