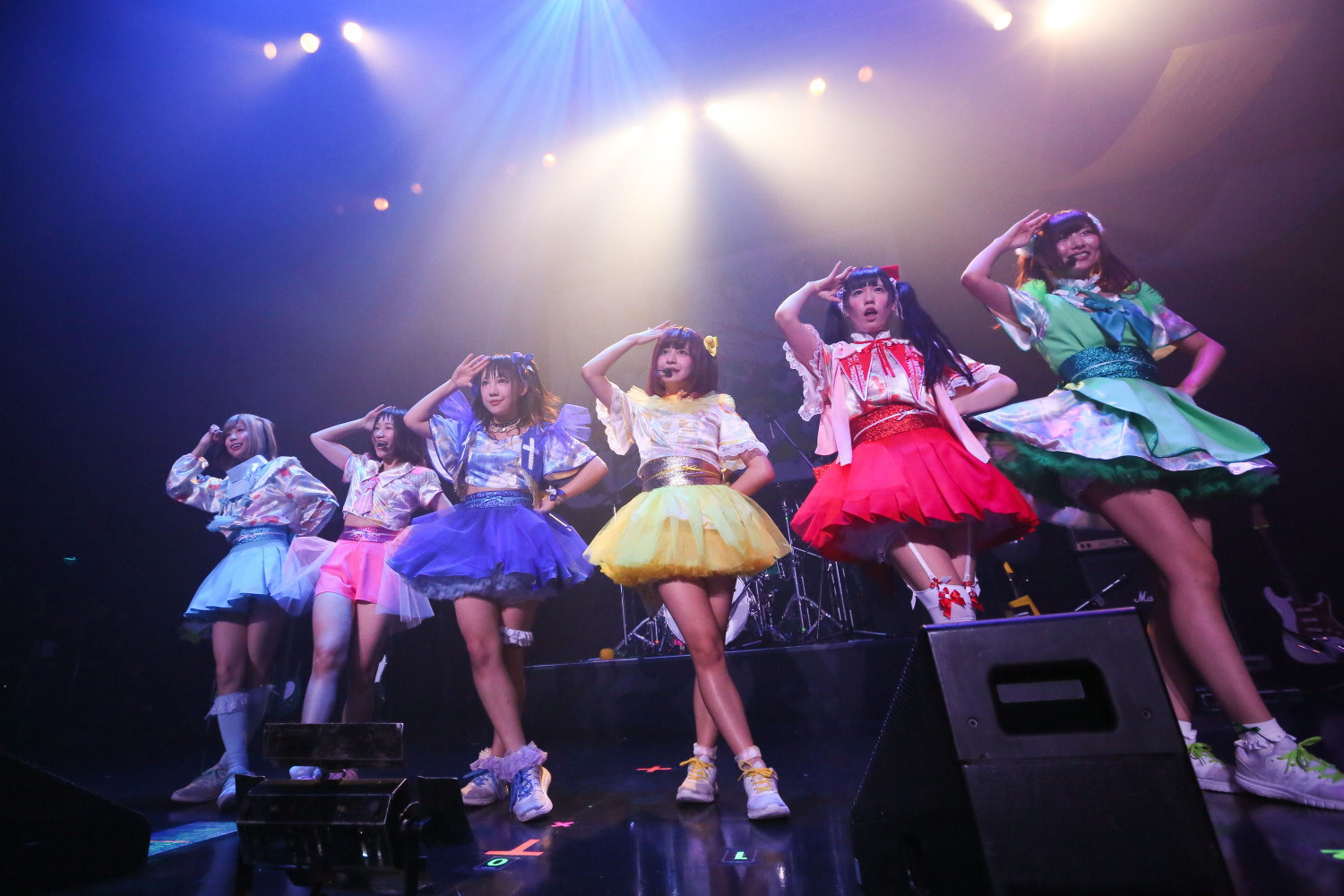 Bandjanaimon! unlocked another achievement on their list and kept their PERFECT YEAR 2017 going as they turned up the heat at Shin-Kiba Studio Coast on May 14th for Bandjanaimon! One-Man Live 2017 Tokyo Da Da Dash〜Chan to Ase Kakanakya ××××〜 in support of their major label re-debut album “Kanpeki Shugi no Sekai ni Fukanzen na Ongaku wo” (release date: March 8)! 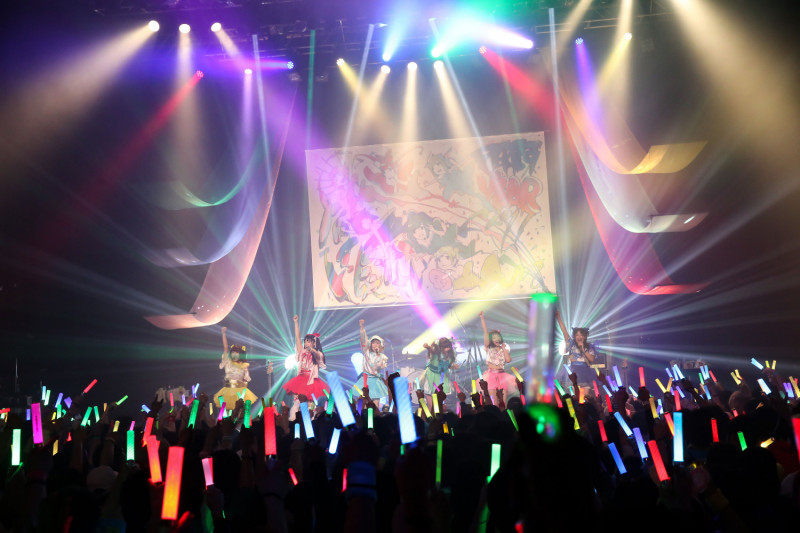 The venue was radiant as the “Monstas” (Bandjanaimon! fans) in the 6 different colors proclaiming their allegiances to their favorite members filed in. A video teaching the dance for “Seishun Karada da Dash!” featuring Bandjanaimon! and choreographer Q-TARO (Dengeki Chanmoranma-tai) played on a screen to the right of the stage to get the audience warmed up for the performance which was to follow. As the theme of the day was to sweat as much as possible, to the left of the stage was the “Pump Up Zone” for the most excited Monstas, towards the back of the hall was the “Stretch Zone” for women and children to enjoy the evening in relative calm, and in the middle was the “Exercise Zone”. 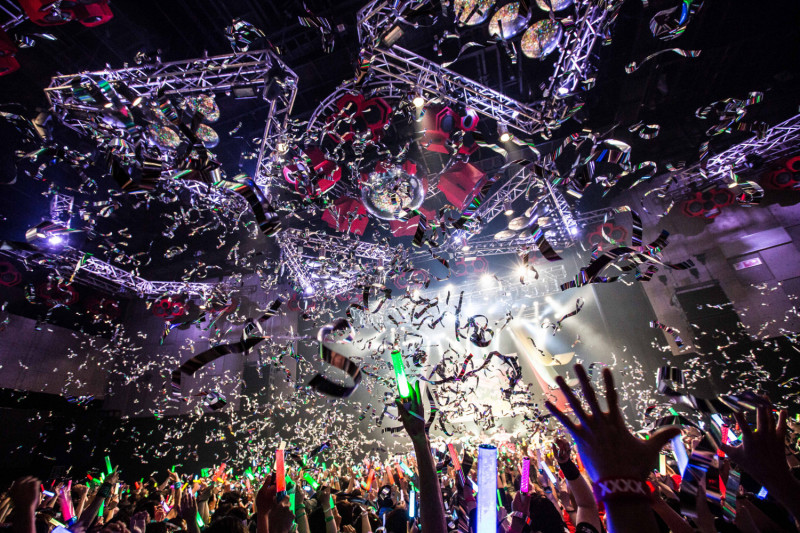 The house lights dimmed and the glow of 6 different colored penlights filled the hall as Bandjanaimon!’s overture boomed from the speakers and the members took the stage to the cheers of the Monstas. Silver streamers fluttered down as Bandjanaimon got off to a fast start with “Seishun Karada da Dash!”, the air becoming warm and moist as the Monstas danced along despite the cramped conditions. The performance shifted into a higher gear as Misako Suzuhime attacked her drum set an knocking out the hammering beats of “Kimemaster!”. Completing the opening barrage of Bandjanaimon!’s pulse-pounding songs, Nanase Gumi rapping away at her pineapple-shaped cowbell to bring the Monstas to a feverish pitch. 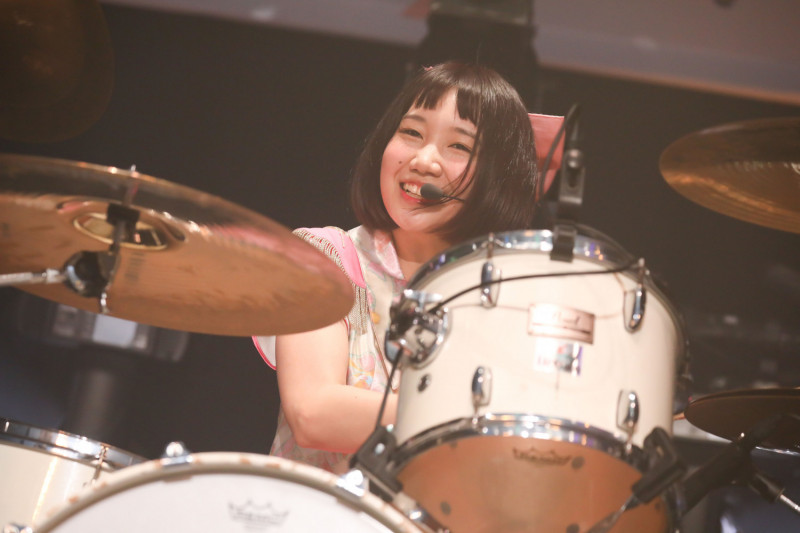 Stopping to welcome the Monstas, the members were greeted with cheers and lifts as they introduced themselves. Miyu proudly announced that the concert had sold-out, just like their concert at Shinsaibashi BIG CAT (Osaka) on April 29th. Ringo Koishio proclaimed that Bandjanaimon! were wearing new outfits, which had prints designed by her adorning them. Nanase reminded the Monstas that the theme of the day was to sweat and that the first 3 songs were just “warm up exercises”. Ōmomoko Sunrise made the transition back into the music by explaining how “FAN+TIC”, the coupling song from their upcoming single was part of a collaboration with the FAN+TIC line of purikura machines of which they were also the spokesmodels for. Yuzu Amanatsu bashed out the power chords on her guitar as Misako drummed along and Miyu thumped away at her bass, the music switching between heavy rock and light ska. The steady pace continued as Bandjanaimon! jumped and punched their way through “Suki Paradise♡” and chopping the hot air to the cheerful “Kimi wa Hero”. 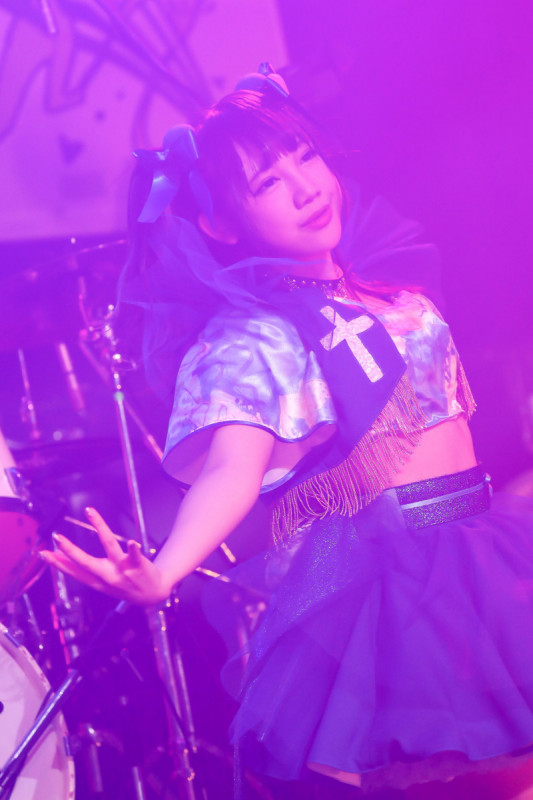 There was a brief moment of uncertainty as Ōmomoko revealed that she had an announcement. However, unlike most “important announcements”, this one was all good news as it was that the evening’s performance was being filmed and would be made into a DVD/Blu-ray which would be released in August. With paper fans in their hands, Bandjanaimon! danced lightly to the festive mid-tempo “Kekkō na Otemae de”, the dreamlike mood lingering in the air as they skipped and box-stepped to “Romantic♥Telepathy”. Although the theme of this block of songs was choreography using the waist, it seemed like there was also an underlying theme of flirtatiousness. 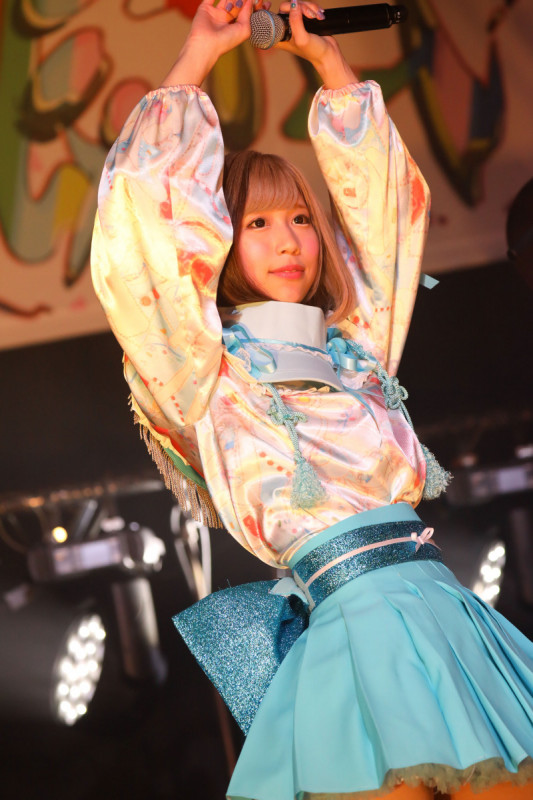 Shin-Kiba Studio Coast was transformed momentarily into its evening alter ego of Ageha as beams of light sliced through the air and the heavy dance rhythms of “Tsuyoki, Magic Moon Night〜Shōjo wa Otona ni Yume wo Miru〜” pulsed from the speakers. The first live performance of “Himitsu Kessha, Futari.” delivered a few stimulating moments in the form of fan service as the members danced with each other closely, Miyu and Yuzu sharing a kiss at center stage and Nanase embracing Ōmomoko from behind. The sultry mood gave way to one of disarray as the members of Bandjanaimon! raced around the stage to the cascading pianos and ringing guitars “Pinheel” before they went offstage and a video showing how Q-TARO and Bandjanaimon! met. The members were made to do a series of embarrassing “chanmoranma” poses and exercises to power up their stamina. 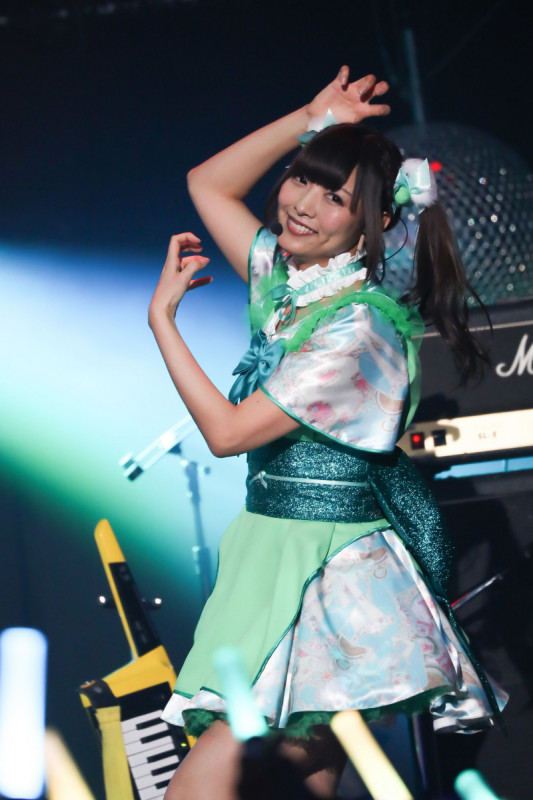 Returning to the stage, Bandjanaimon! shuffled and robot-danced to the jazzy “YAKIMOCHI” with Q-TARO making a special guest appearance and earning a rousing ovation as he danced flashily along side them. Continuing on with “Shuttokodokkoi”, the performance began to peak again, the Monstas going wild as they danced along and did the aerobics in the middle of the song. The most intense minutes of the evening arrived as Ringo Koishio shouted “taka toko tan” to unleash Bandjanaimon!’s fiercest song “Taka Toko Tan -Forever-“. The crowd swirled as the Monstas danced around in circles and banged their heads. 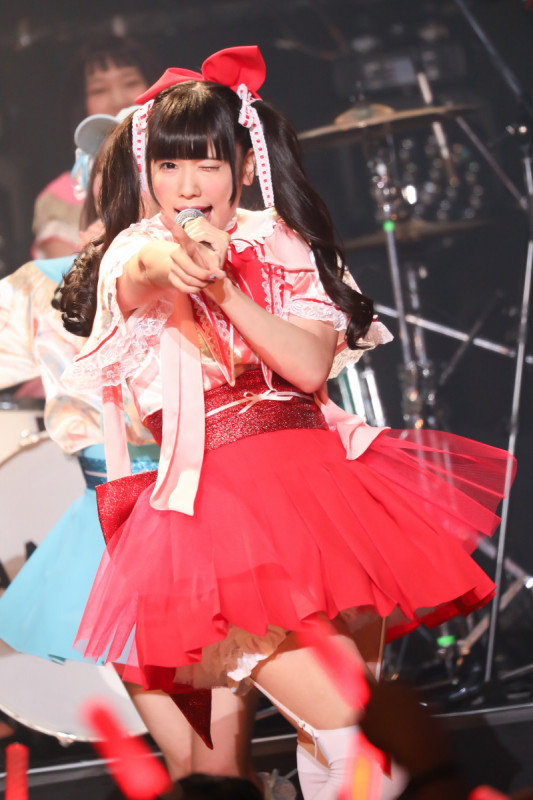 Yuzu called out to the Monstas to check how they were enjoying the evening and reminded them to be careful in the wake of the wildness that had just transpired. Miyu thanked Q-TARO for coming out to perform with them, noting that he had also done the choreography for some of Bandjanaimon!’s other beloved songs like “YAKIMOCHI”. One of the group’s older songs and fan favorites “Tsunagaru! Kanaderu! MUSIC” made an appearance as the end of the concert drew closer. 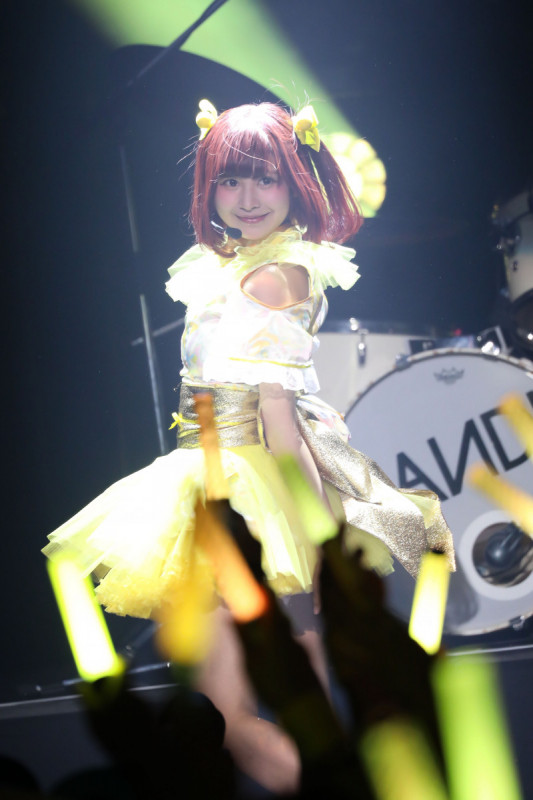 The energy continued to build as the Monstas erupted into a MIX as soon as the piano intro of “Chocolat Love” rang out, their penlights waving along to the music. Riding the waves of enthusiasm, the members embraced as the Monstas called out to them. The big finish came with
“YATTA!”, specks of light scattering from the mirror balls and paper hearts fluttering down from the rafters. Thanking the Monstas, the members jogged offstage. 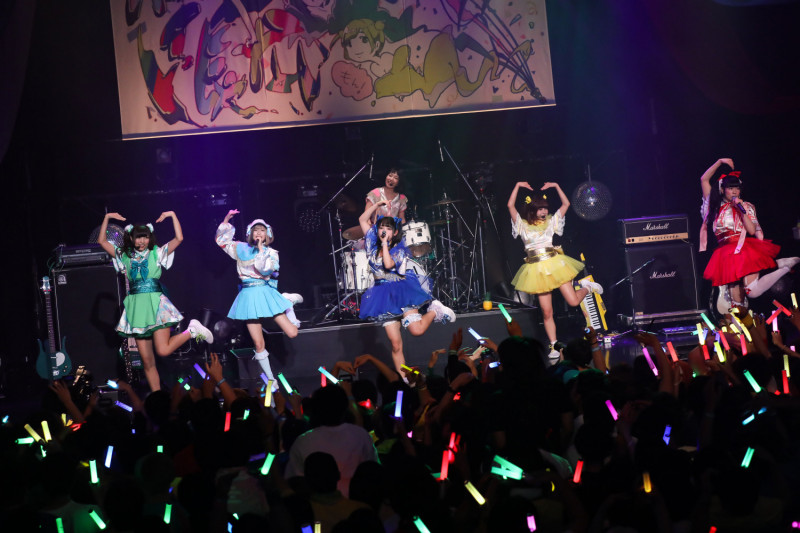 The encore calls began right away but were interrupted by the reveal of the MV for “METAMORISER”, which was followed promptly by its debut performance. After taking a commemorative picture with the Monstas behind them, Bandjanaimon! thanked them again for coming out and making the evening a success and reminded them that they would be starring in the anime Tsugumomo (“METAMORISER” is the opening theme for the anime) the following week.

After the debut performance “Dream Town” and the final track of “Kanpeki Shugi no Sekai ni Fukanzen na Ongaku wo”, the sentimental “End・Less”, it appeared as if Bandjanaimon! was done for the night but, after a few more minutes of encore calls, they were back on stage. Ringo Koishio shared that they had prepared one last song contingent on them selling out Shin-Kiba Studio Coast, an accomplishment that came mere hours before the doors opened. Galloping through “UP↑ Prime”, the members smiled as they looked out into the audience at all the Monstas bouncing along to the music. Taking their final bows and leaving the stage, the curtain on the first half of Bandjanaimon!’s PERFECT YEAR 2017 came down. 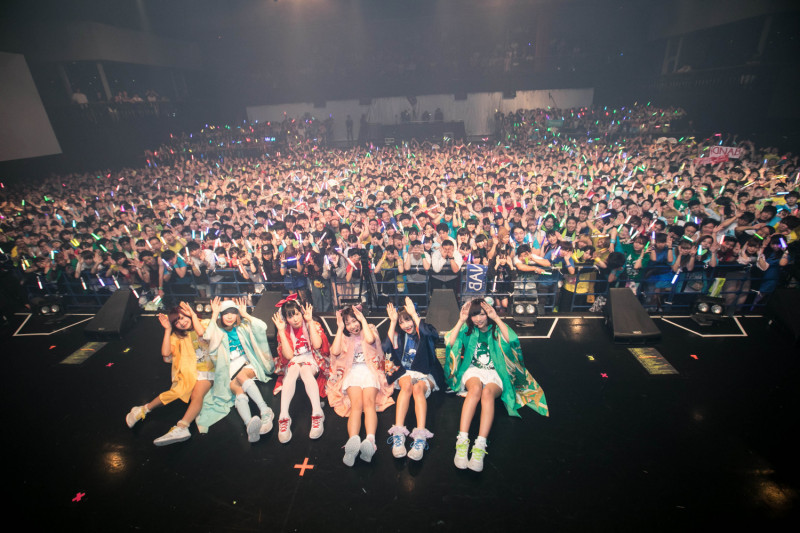 Bandjanaimon!, the “mixed media of the idol world” have been gaining momentum for quite a while, moving even faster since their major label re-debut in 2016. With their sold out performance at Shin-Kiba Studio Coast and their upcoming DA-DA-DASH TOUR 2017 starting on May 30th, their PERFECT YEAR 2017 promises to live up to its name! 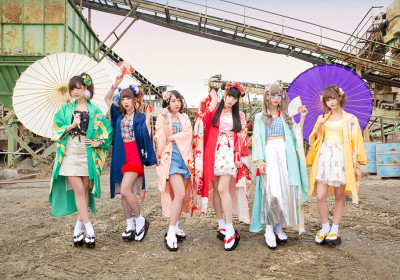 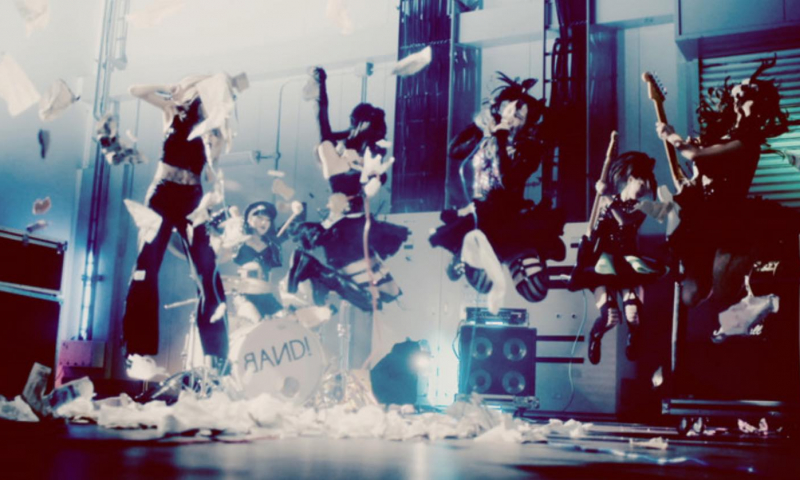 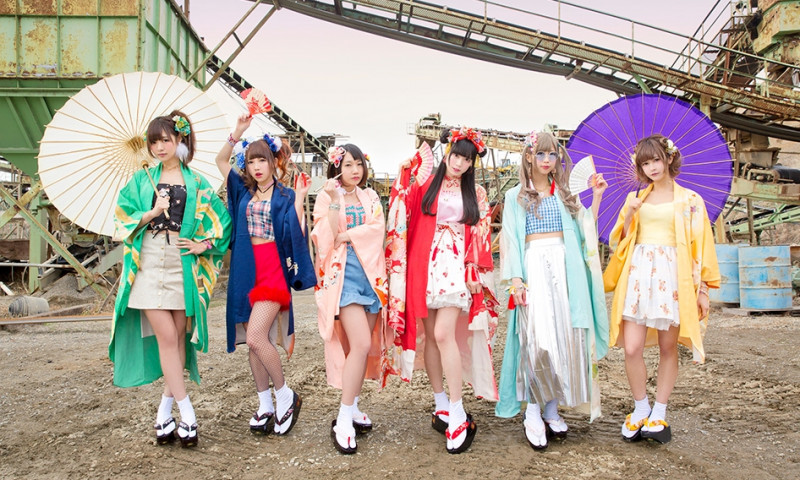