Save Dempagumi.inc! Their Phantom of the Kill Commercial is in Danger!

Dempagumi.inc are one of the biggest representatives of otaku culture and Akihabara so it seemed like a perfect match when they became the image characters of the mobile RPG game Phantom of the Kill (Fuji&gumi games). However, it seems that their position has been challenged by a new player entering the game!

Dempagumi appeared in Phantom of Kill cosplay on the final day of Tokyo Game Show 2014 where the collaboration was announced.

When the MV for “Phantom of the truth” was revealed in November of 2014, fans of Dempagumi were treated to more of the breathtakingly well done cosplay of the members.

They even appeared in the commercial for the game back then but it seems that their latest commercial may not be broadcast? Please take a look at the videos listed below to see what events transpired to put Dempagumi in such a tough position.

While there are episodes of Dempa Jack that are subtitled on the official channel, these have not yet been subtitled. The story should be not that difficult to follow along even without the details but perhaps by watching them you can learn some Japanese that you did not know before?

Here is footage of Dempagumi filming the commercial for Phantom of the Kill but it was revealed that unless the game reached 1 million downloads, the commercial would not be aired and they would be replaced!

Celebrity manga artist/illustrator/talent/actor/director Yoshikazu Ebisu, dressed as Longinus (“Ronebisu”, a combination of Longinus and his own name) from the game makes his appearance much to the surprise of Dempagumi!

You can see in the video below that there was a special gachapon booth set up at Dempagumi’s Yoyogi National Stadium 2-day concert with pins featuring the members on them. Thanks to the support of Rex, who filled all 10,000 capsules by hand and wrote a banner to advertise the booth, they got one step closer to the goal of getting 1 million downloads.

Dempagumi then hit the streets of Akihabara to put up posters advertising Phantom of Kill but “Ronebisu” was out doing a bit of advertising of his own!

Go to the Phantom of the Kill Special Commercial site listed below and Tweet which one you want to see! Dempagumi is still in the lead but, not by much! Don’t forget to download the game from the App Store or Google play as well! 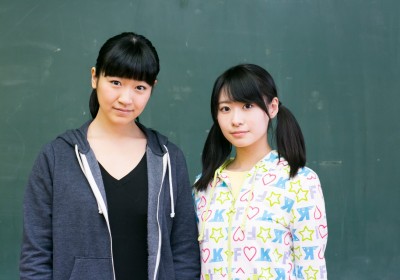