Producer : non-public, number of people and members : unspecific.
Singer, DJ, creator, etc. in and out freely, this activitie is Dance Music Project stimulate each other in new sense of value.
In addition to the specificity of it, to appoint female bilingual vocalist.
That music based on electronic dance music and was mixed ROCK, POP, HIPHOP, R & B, etc. It was super catchy. And the unconventional concept (colorful visual artists and Music Video) was got attention to the listener.
It was recorded in the FIRST EP “LOVE2MOVE” was played over three hundred thousand times, now it is getting big attention.
That dance music project VIVIVID’s new song “AGE OF FUN feat.Vell, ayaka” is decided to supporter’s song “Puyo Puyo!! Quest”. And it was announced that it is broadcast as CM music of Kuriyama Chiaki on 4/23.

This time, Vell(Miracle Vell Magic) who is bilingual vocalist and ayaka(Ayaka Takei), they two people are Appointed as feature vocalist.
“F-U-N the age of fun, F-U-N age of fun, let’s go!!!” (CM-song of Puyo Puyo!! Quest) is catchy and characteristic of them.

Music Video of the short version have already been published on the official site with the tie-up information.
In MV, Model team is wearing the huge sunglasses which is the shape of VIVIVID logo(also uesed CD jacket of “LOVE2MOVE” in MV, separated into five and fight each other throwing color powder,red, blue, yellow, green and purple, it seems real Puyo Puyo!! Quest.
In addition, the casts : Licaxxx · yurisa · Naomi · Hatanaka Hikaru Mizushima · Matilda · ASAMI · aoi · Ruko Yura, has gethered. These are models and DJ who charismatic popular in scenes of Tokyo today, Also Taka Daisuke “producer of Puyo Puyo!! Quest” appeared in MV, American Apparel which is overwhelming support from fashionistas around the world is in charge of costumes, great members gathered than previous work.

“AGE OF FUN feat.Vell / ayaka” will release on iTunes 5/7 as DIGITAL SG, and Full version MV will public on early May.
By all means want to focus on the movement of the future. 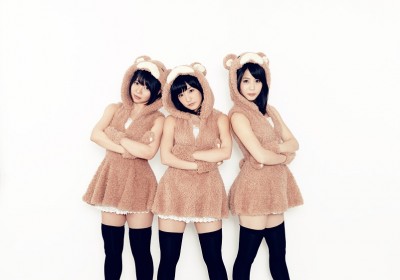