Warning: Use of undefined constant display_name - assumed 'display_name' (this will throw an Error in a future version of PHP) in /home/allbluetgu/tokyogirlsupdate.com/public_html/wp/wp-content/themes/Updaty/single-guide.php on line 62
Ayaya on Jul.11.2017 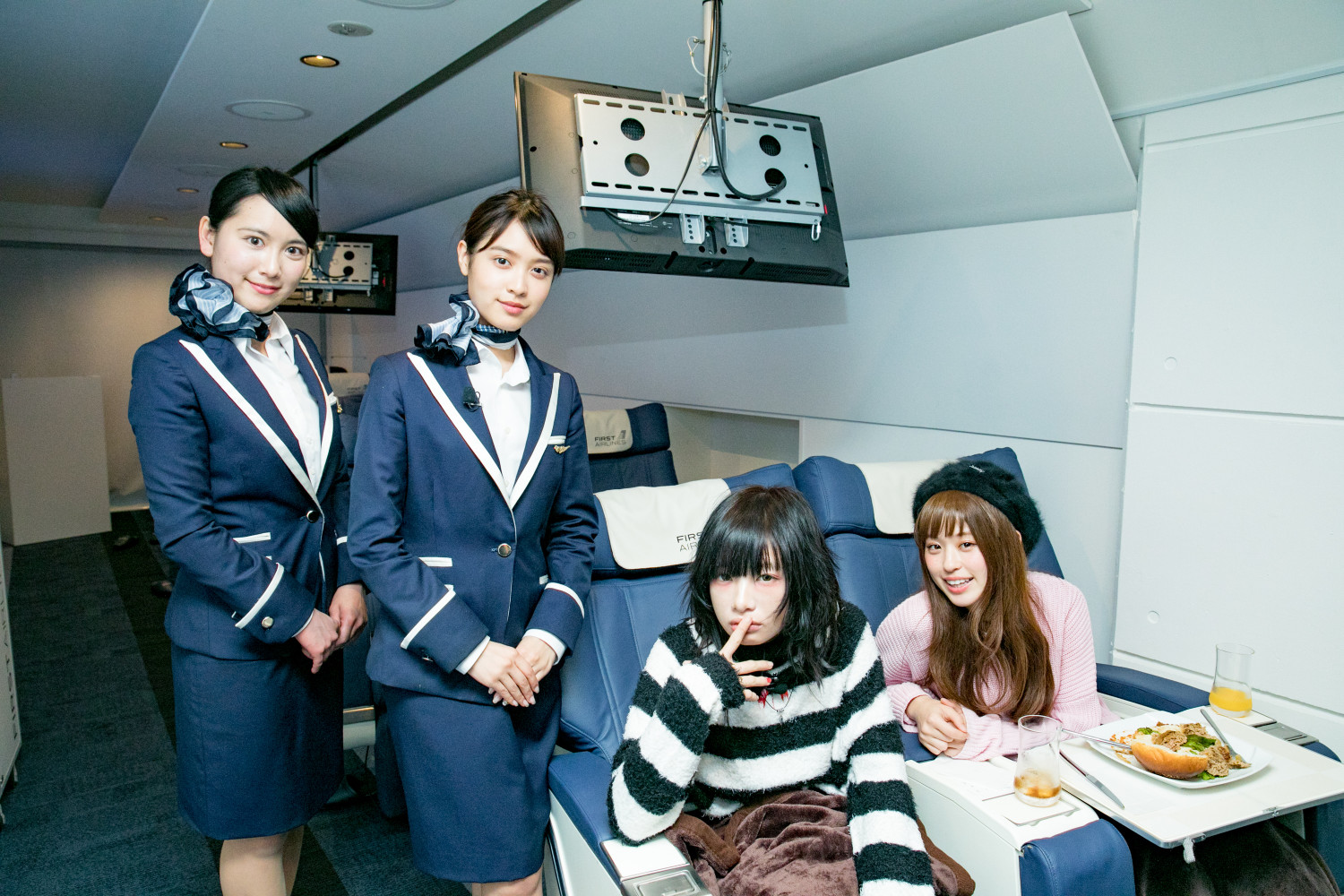 Among those who have traveled overseas, there must be a few that have dreamed of going in first class someday. However, the cruel reality is that such a dream is often too expensive to make come true. Not all hope is lost as FIRST AIRLINES in Ikebukuro that offers the experience of fist class air travel through the magic of VR technology! 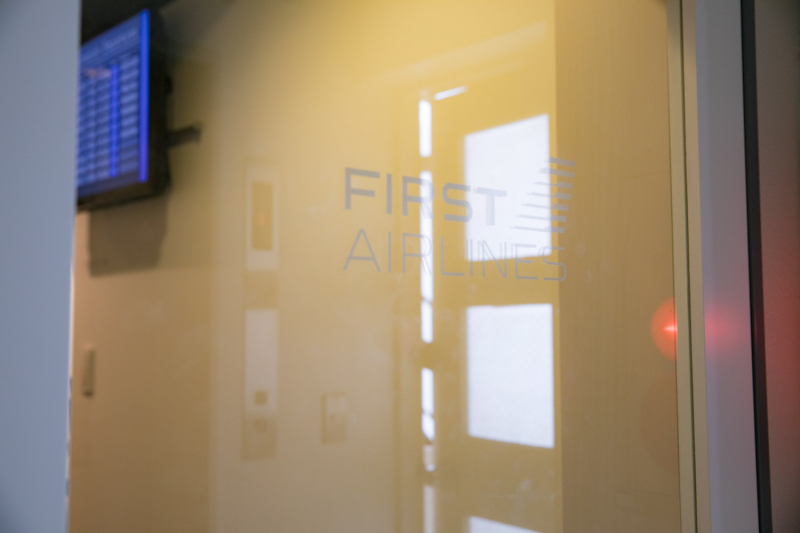 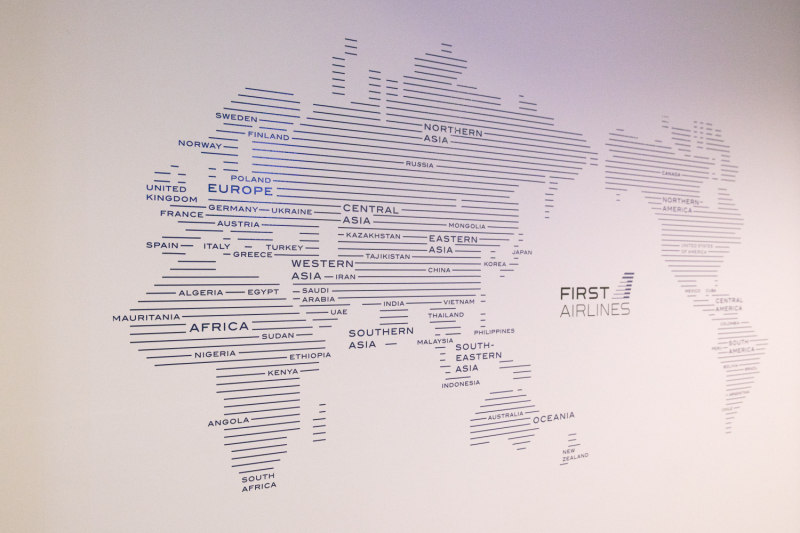 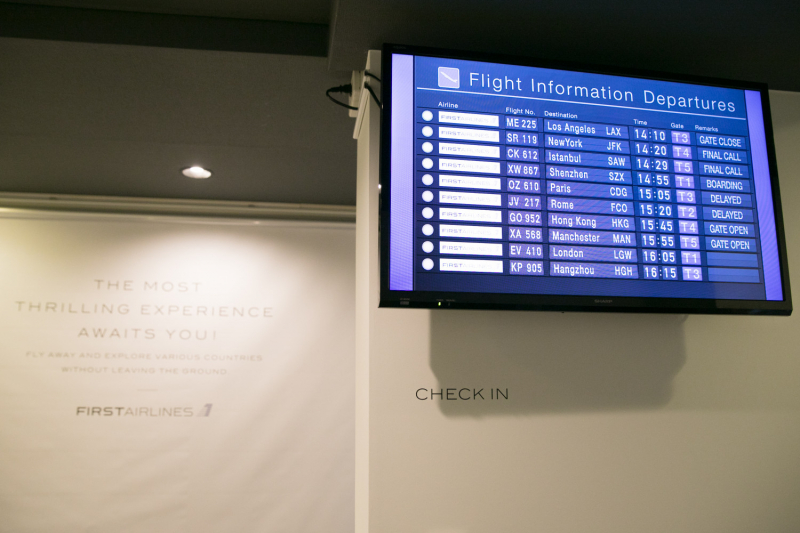 The Kawaii Asia crew of Hikari Shiina, Ai Matsumoto, and Anna Yano checked in, surprised by the airline-like logos and electronic flight information display system upon entering. It was just like they had arrived at a real airport! Any memories of being in the middle of Ikebukuro moments earlier faded away. 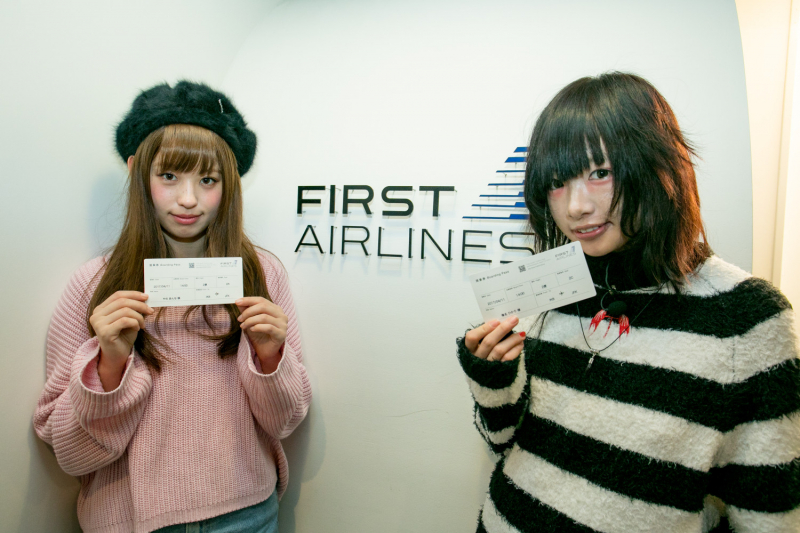 Proceeding further, they entered what looked exactly like the cabin of a jet airliner, complete with the same type of seats (Where could they have gotten them?) that most people have only seen in passing as they board the plane. Ai Matsumoto changed into a flight attendant uniform to observe as the emergency exits were pointed out and the announcements were made. 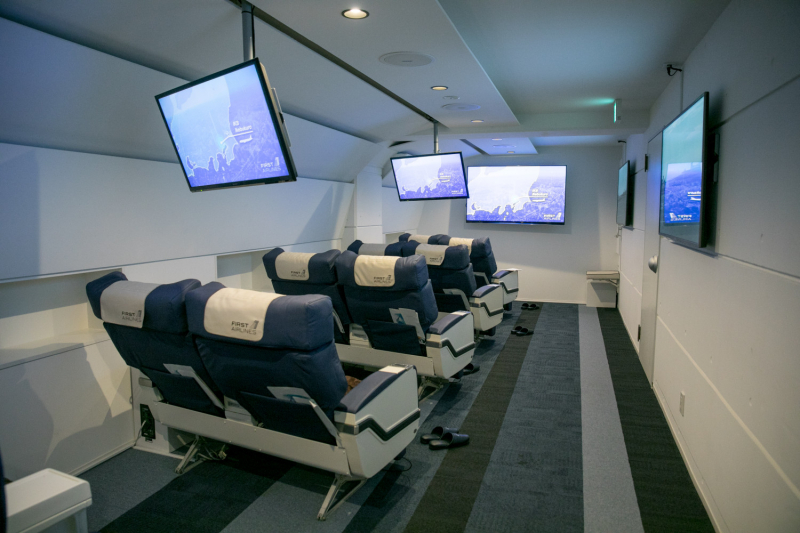 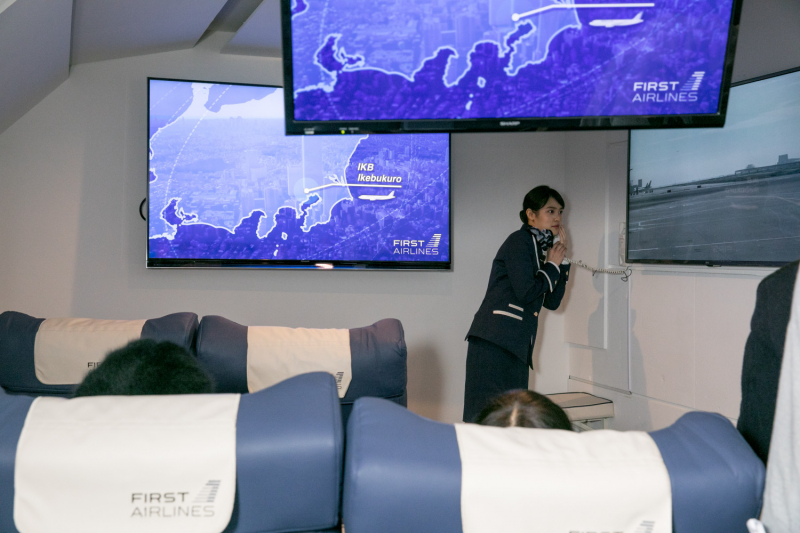 At last it was time for take-off! In addition to the sounds of the tires rolling down the runway and the engines roaring, the broadcast from the cockpit could be heard. It might just have been our imagination but it felt like the fuselage was swaying and the air pressure dropped, causing ears to pop. 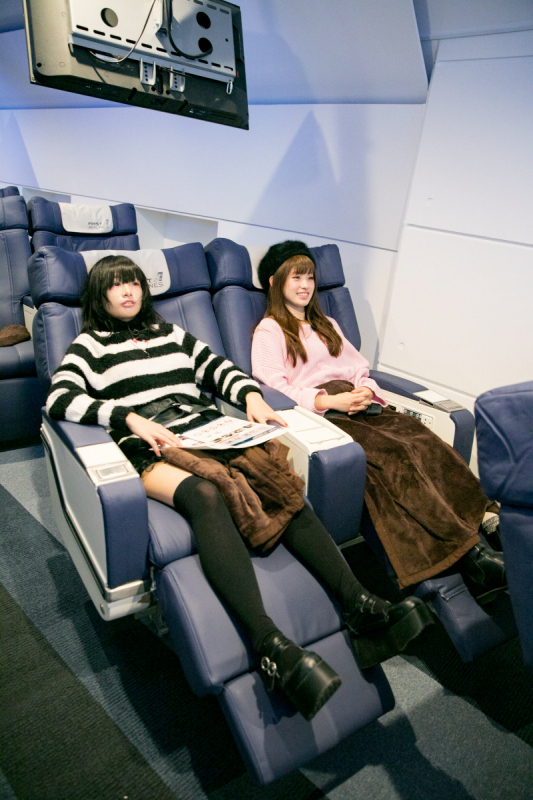 Once in the air, where should the destination be? Depending on the day, the flight plan changes and along with it the menu for the in-flight meal service. As the course was set for New York on that day, the main course was a New York-style open face burger. 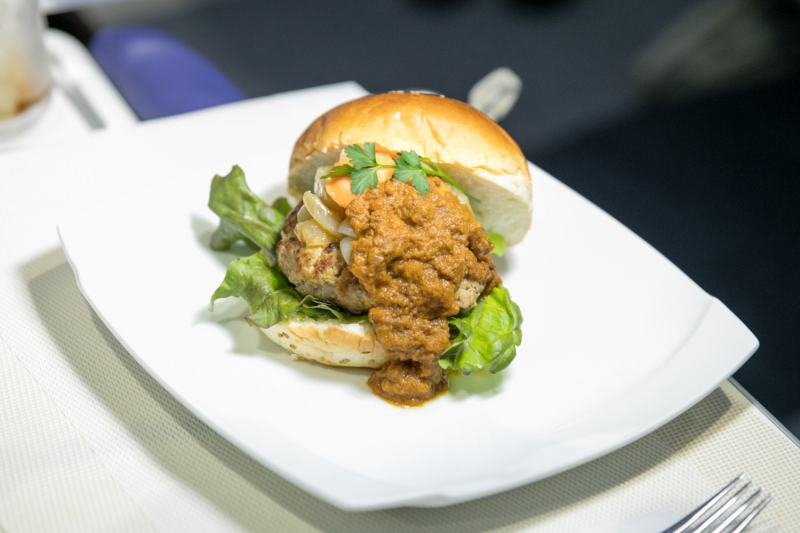 The highlight of the FIRST AIRLINES experience is the “virtual trip”. By putting on the VR goggles, the wearer will see a 360° view of the New York streets, its skyscrapers standing tall in front of their eyes. Without actually going abroad one can take in the sights of an international vacation. The VR contents also change accordingly to the destination. 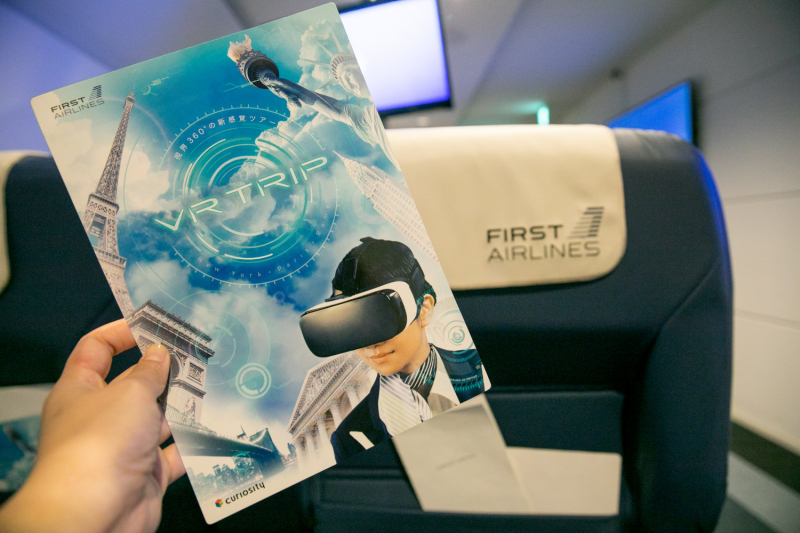 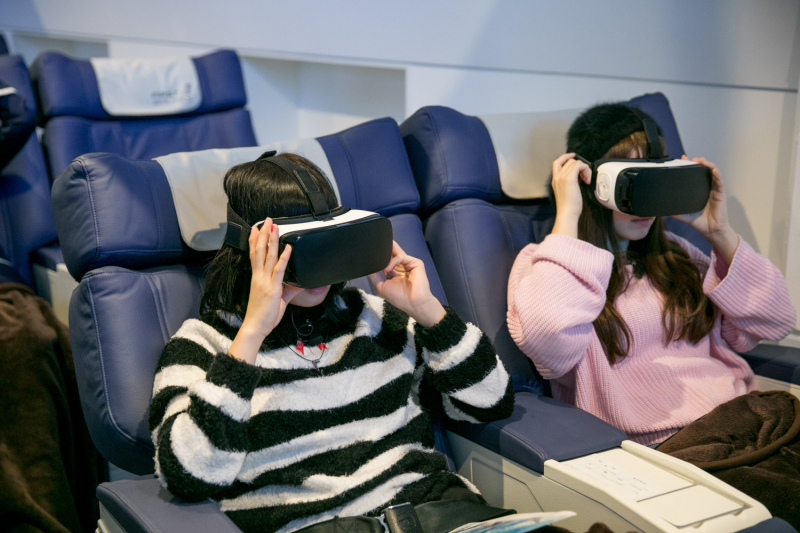 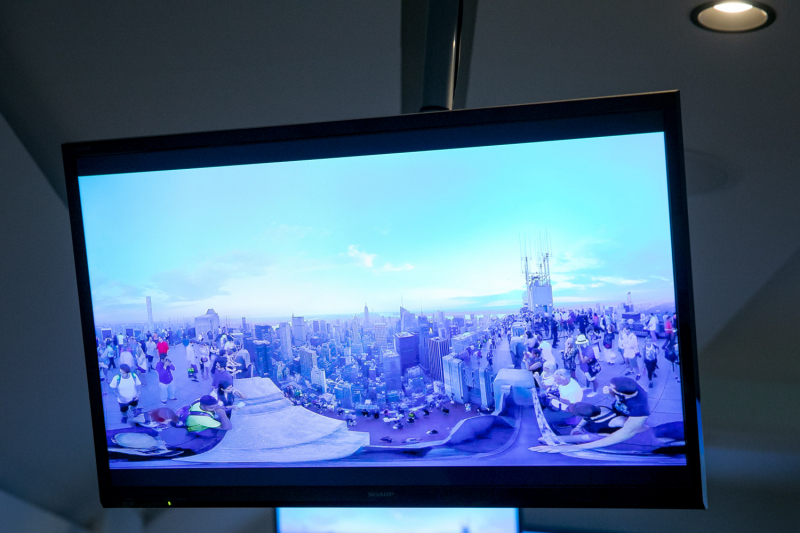 FIRST AIRLINES, with their commitment to recreating the food, service, and accommodations of a first-class flight, may possibly rival that of the real thing. At 6,600 yen for a 100-minute package, a first class air travel experience has become more accessible. Why not make a reservation?