It is announced that “Suichu Niso Plus (Underwater Knee-High Girls Plus)”, the second series of the photo book that caused a sensation, will be published in October 20.

The second series also take over the original concept as cute & sexy girls in knee-high socks are diving underwater, however they “plus” some props as title says ; for example, umbrellas, rabbit ears, mecha gear, octopus’ hands and so on. The knee-high socks are produced by NAOKI, a mecha designer on a TV anime “Gundam Build Fighters Try” that will be broadcasted in October.

The photographs are taken by Manabu Koga, who is known for underwater photography, such as in the Mika Ninagawa’s film “Helter Skelter”. In the photo book, ex-Ebisu Mascats member Manami Yamaguchi, popular cosplayer Shimarisu-chan, and other cute girls are appearing.

When the first series was published, it became controversial as “Why you combined knee-high socks and girls underwater?” and “It’s not really good to anybody”. However, the second series will be coming soon proudly, ignoring such criticism. Yes, it might looks weird, but could be interesting at the same time, as the quest for kawaii girls. Welcome to the world of underwater girls, creating possibilities of infinite! 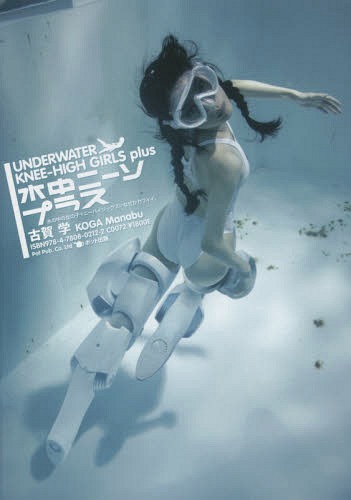