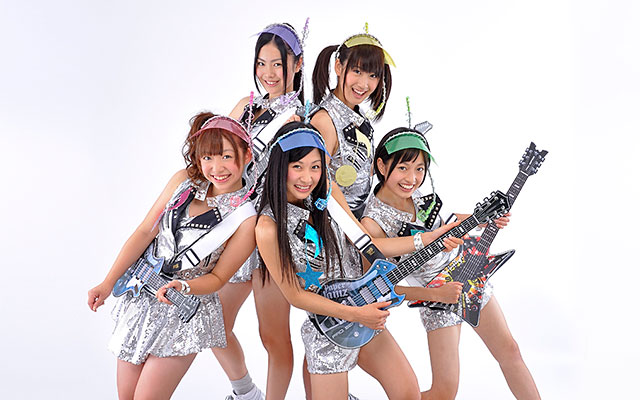 The girl group Telepathy was selected from the first idol project ‘AIR-DOL AUDITION’ by FOR LIFE MUSIC ENTERTAINMENT in the spring of 2012. Following this, they formed the first air guitar idol group in the universe the same year in September.
Telepathy consists of five members Miku Sasaki, Nanami Nagura, Maki Kimura, Neko Maeshima and Mai Mikami, who choose the name Telepathy to ‘present the connection between the human mind and heart’.
Telepathy provides a brand new performance style, ‘Air Guitar’, which includes an essence of baton twirling and elements of acrobatics, a style they wish to show to the world. Moreover, Telepathy aims to spread ‘Air guitar performance’ to the world as a new form of performance.

They officially performed at the 9th ‘TIMM’ [Rookies 10 Minutes Stage] in October 2012 and afterwards they have had monthly events at ‘PiPiPi Kai, and Natsu Pi Kai’. In addition, they also performed at the ‘TOKYO IDOL FESTIVAL 2013’, the biggest idol festival in Japan.
Furthermore, they will also perform at ‘Dai PiPiPi Kai’ on 5th October 2013, which is the biggest Telepathy event so far in Japan. Finally, they debuted their double A side single ‘Telepathy Mirai / Telepathy Sekai’ on 9th October 2013.