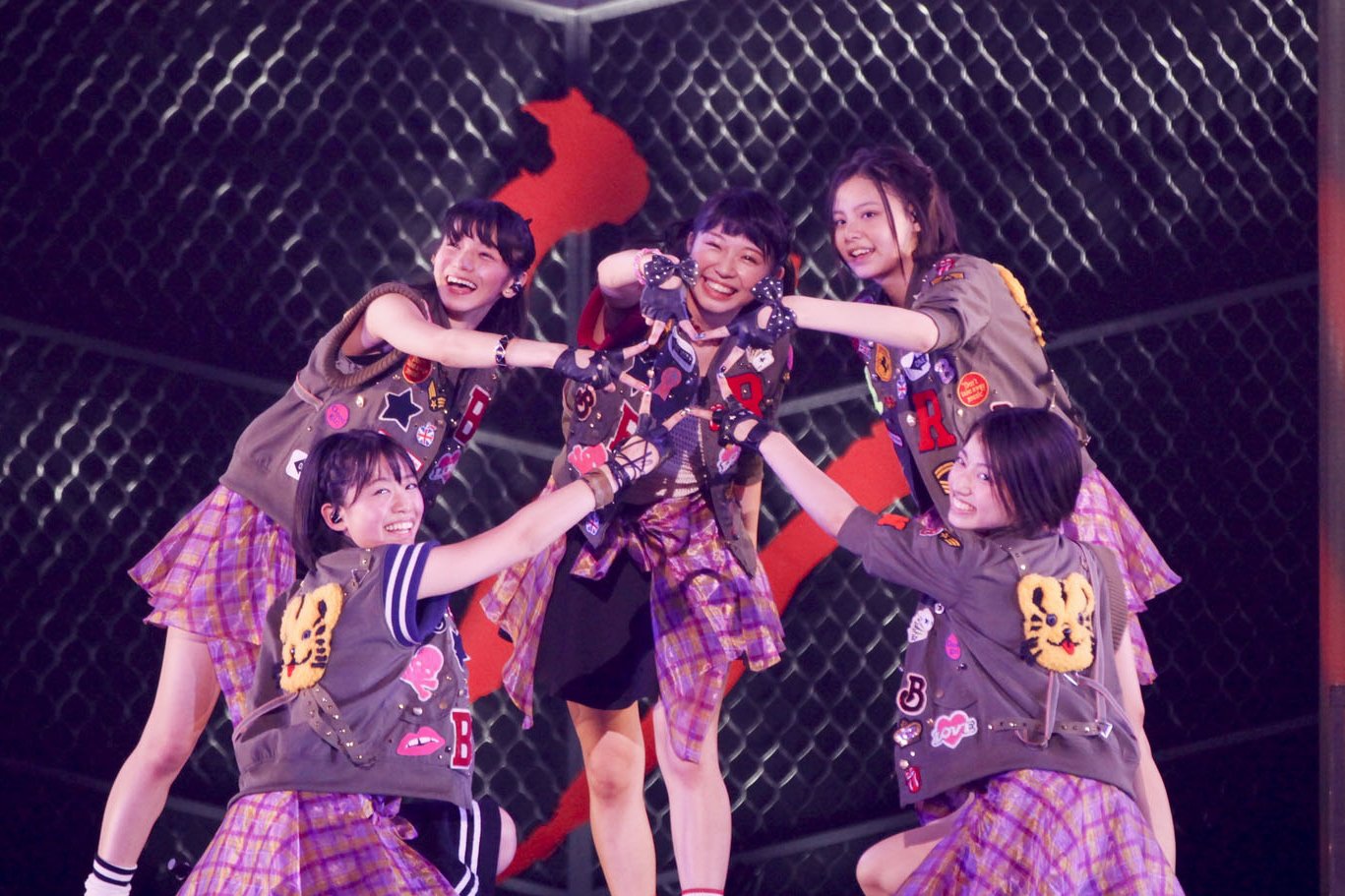 Babyraids realized their dream of having a solo concert at the legendary Nippon Budokan on December 18, 2014.

Introduced by a video with 5 animated tigers running, Babyraids made their dynamic entry by pouncing out of trapdoors on the stage and went right into their debut single “Babyraids”, they continued with “Baby Ambitious”, “Level. 1”, and “Bucchake Rock’n Hachakke Roll”.

Following a video featuring Erika Denya dressed in a Santa outfit and playing out an imaginary date scenario, Babyraids went into a medley, which featured “Saijoukyuu”, “Together! Together! Together!”, Supernova” with an intro solo by Manatsu Hayashi, and the towel-waving anthems “Christmas ga Rival” and “Natsuiro Party”. Next was “Magic Hour” and “Big☆Star” which ended with the 5 members making a star with their fingers, their nails with stars painted on them just for that moment. 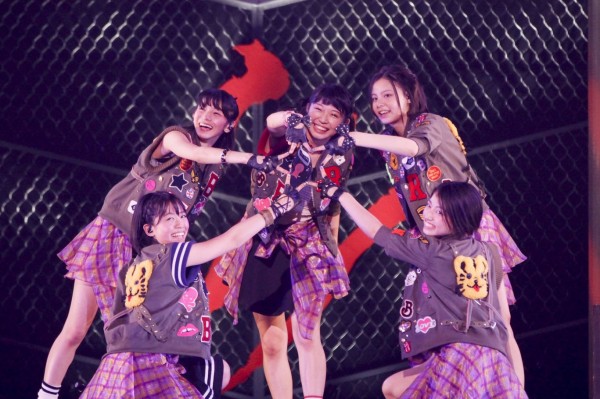 Launching into their Oricon top 5 ranked 8th single “Tora Tora Tiger” after teaching the arena the choreography for the chorus, things shifted into high gear with “Get Over Night” and “Rock on Darling”. The Budokan glowed red as blue and green lasers zipped along the stage and balcony during “S.O.K.” and Rikako Oya waved a Babyraids flag wildly during “Charinko Idol” as the audience jumped and spun along to the music. 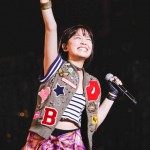 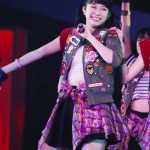 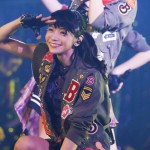 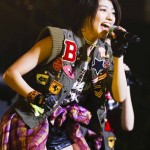 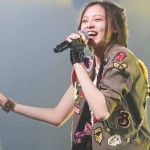 The arena went dark and when the lights came back on a Babyraids that had never been seen before emerged. They were dressed in fluffy white dresses and were wearing high heels! Performing “Fuyu no Mahou” as fog enveloped the stage, they then were raised 3 meters on platforms coming out of the trapdoors while singing “Namida no Namae”. Moving to the platform in the middle of the arena seats, they sang “SMILE” before descending into the floor of the Budokan for another costume change as the screen showed a video documenting their journey to this magical night, separating their milestones into 8 different levels.

Returning dressed in sparkly halter-tops and skirts with LED shoes, they debuted “2years”, a song that was only sold outside the Budokan that night, as the screen showed a collection of pictures from their brief 2-year history. The concert ended with the high powered “Atarashii Sekai”, “Michishirube” accompanied by pyrotechnics that shot up to the 2nd floor balcony, “Baby Revolution”, and “TIGER SOUL”. 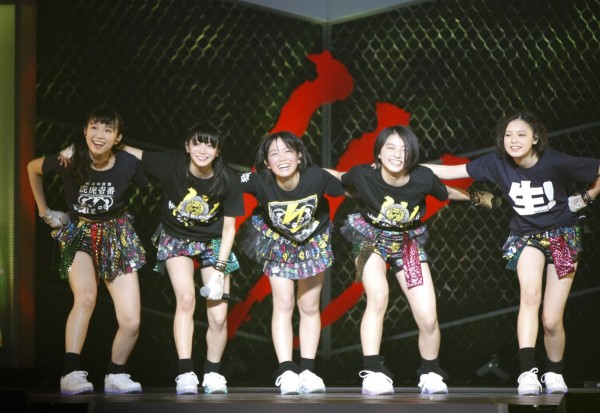 Starting the encore dressed in their Budokan t-shirts they performed ” GET OVER NIGHT” again before the screen revealed some announcements for Babyraids’ 2015. In the spring, they would release their 9th single and the DVD for the Budokan concert as well as embarking on a nationwide 17-city tour. They also hinted at “something” being planned in Tokyo and Osaka for the summer. Even though having a concert at the revered Nippon Budokan would normally reduce the performers to tears, leader Erika Denya expressed her regret that they had not managed to fill all the seats despite acquiring 13,872 signatures to petition the event. Continuing on, she explained that because of these feelings, Babyraids would change their name to Babyraids JAPAN, in order to “capture” the people of Japan (much like the national soccer teams Samurai JAPAN and Nadeshiko Japan), fill the Budokan, appear at NHK’s Kohaku Utagassen, and become “national idols of Japan” (like AKB48).

After dropping such a heavy announcement on the audience, the encore continued with “JUMP”, mixing together the power of Babyraids and the audience as they pumped their fists and jumped tirelessly. Of course the night would not be complete without a performance of their first major hit ” Koyomi no ue wa December” which thrust them into the national spotlight (it was used in the 2013 NHK drama “Ama-chan”). As they had done at their Hibiya Open-Air Concert Hall in July, where they had made the dramatic ultimatum “Budokan or breakup”, they ended the night by performing “‘Babyraids’ as Babyraids”.

While making it to the Budokan is an auspicious milestone in any artist’s career, this is only the beginning for the upstart group that clawed and scratched their way this far. The DVD for Babyraids’ first Budokan concert will be on sale in the spring of 2015 so if you weren’t there, you can experience all of the excitement and power that was that legendary night. Unsurprisingly, just as Babyraids had done before at so many other idol events, there were idol groups waiting outside the Budokan trying to “catch” people entering and leaving the Budokan. 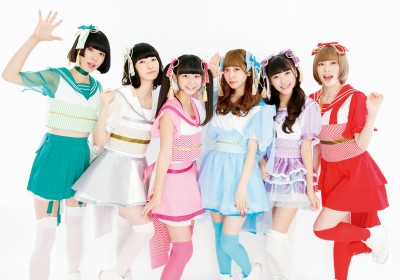 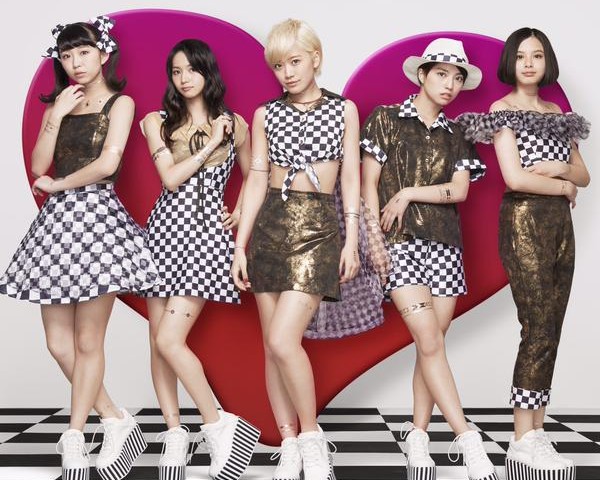 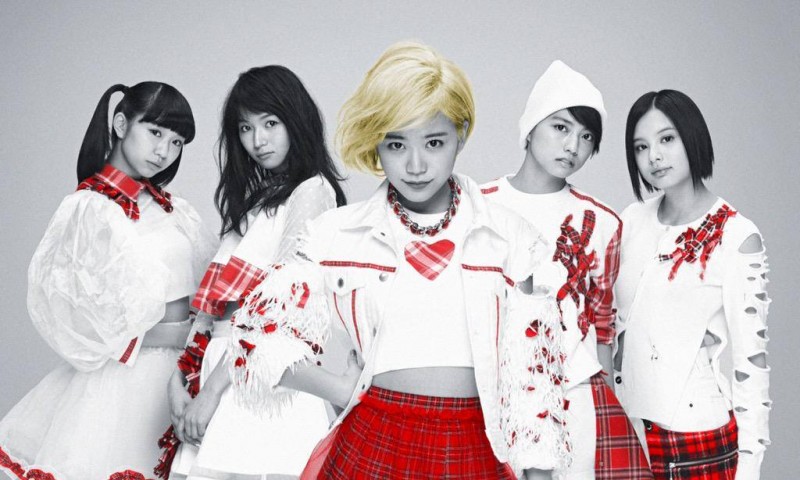 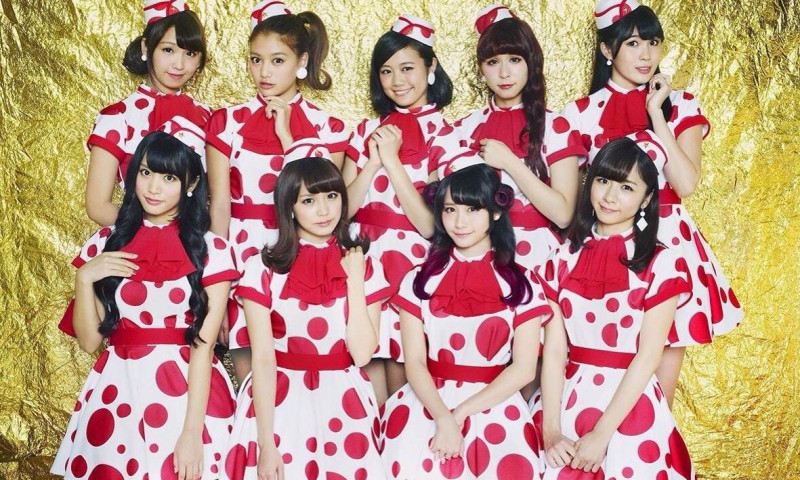 Additional Performers for @JAM the Field vol.7 Has Revealed!